In Depth: Why Hong Kong Could Gain From China’s Foreign Share-Sale Crackdown 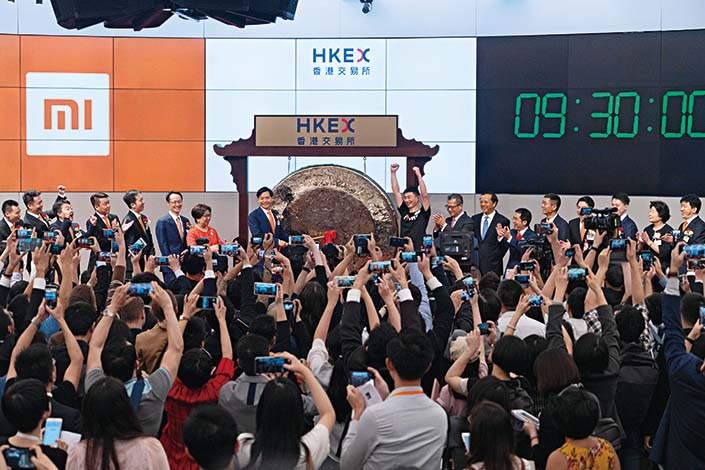 The Hong Kong Stock Exchange may benefit from Beijing’s crackdown on foreign share sales because it doesn’t count as “foreign” under the central government’s new cybersecurity rules. Photo: VCG

China’s tightening scrutiny of U.S.-traded data-heavy companies is raising the prospect of more share sales in Hong Kong, even though the city’s stock exchange is known for having stricter requirements than U.S. bourses.

Under a newly revised regulation, Chinese companies holding the personal information of 1 million or more users have to seek a government cybersecurity review before a foreign share flotation. “Foreign” under the rule doesn’t include Hong Kong, suggesting an opportunity for the exchange.

Several Chinese companies that recently filed or made plans to sell shares in the U.S. are considering a switch to Hong Kong after Chinese ride-hailing giant Didi Global Inc. came under review by Chinese cyberspace regulators two days after its June 30 debut on the New York Stock Exchange (NYSE), followed by the removal of its apps from app stores.

Among them, podcast and audiobook platform Ximalaya, which has 250 million monthly active users, would be subject to cybersecurity review under the new rules. The Tencent Holding Ltd.-backed startup filed for a proposed NYSE offering with an initial fundraising target of $100 million in early May, but put the plan on hold two weeks later.

Ximalaya has since basically given up floating shares in the U.S. and may switch to Hong Kong, a person close to the company’s plans told Caixin.

Another U.S. hopeful is Huolala, an Uber-like Chinese freight company. The enterprise filed confidentially for a U.S. IPO on June 24, but now is considering Hong Kong instead, Bloomberg reported.

“With the unclear outlook of Sino-U.S. relations, companies all want to have Plan B,” said an executive at a U.S.-traded Chinese company that recently sold stock in Hong Kong.

The Hong Kong Stock Exchange declined to comment on individual companies’ IPO plans. But the exchange has overhauled its rules in recent years, making itself more appealing and accessible for new-economy tech companies from the mainland.

Until last year, Hong Kong was not a preferred venue for new-economy companies because of relatively conservative investors, limited liquidity and a higher weight of old-economy companies. In 2014, the loss of technology giant Alibaba Group Holding Ltd.’s IPO to the U.S. prompted a long-awaited restructuring of HKEX rules.

Alibaba chose New York for its record $25 billion IPO after Hong Kong refused to accept the company’s dual-class share structure as conflicting with the exchange’s “one share, one vote” principle. In late 2017, HKEX amended its rules to allow companies with such structures as well as pre-revenue biotech companies and secondary share sales of overseas-traded mainland companies.

To further lure mainland companies, Hong Kong also amended its rules to include companies traded in the U.S. that have secondary listings in Hong Kong into the Hang Seng Index, a move meant to drive passive fund flows to the Hong Kong market by funds that track the index.

The changes immediately attracted some of the largest flotations by Chinese tech companies, including smartphone maker Xiaomi Corp. and online services provider Meituan, followed by an Alibaba offering.

The changes aim to continue enhancing the competitiveness of the Hong Kong IPO market, said Christina Bao, head of global issuer services at HKEX. The exchange is collecting market opinions and will announce detailed results in due course, she said.

In the third quarter, Hong Kong will also launch consultation on share sales through special purpose acquisition companies, or SPACs, one of the hottest IPO trends this year globally.

HKEX said this month that it plans to shorten the time between IPO pricing and trading debut to two days from five to make the process more efficient. The change is slated to take place in the fourth quarter next year. The two-day cycle could reduce investors’ risk exposure to U.S. stock market fluctuations, said Bonnie Chan, head of listing at HKEX.

The exchange this month also established a Mainland China Advisory Group and a new Mainland Markets Panel to provide support for the future development of its China initiatives.

The Hang Seng Index had long been criticized for being overstuffed with old-economy banks and property developers. After a series of changes and the embrace of new-economy components, the Hang Seng family of indexes has increasingly become “younger,” and now includes Alibaba, Meituan and Xiaomi.

By the time the HKEX celebrated the third anniversary of its new rules in March, 146 new-economy companies had sold shares in Hong Kong, raising HK$682.2 billion ($87.8 billion), and accounting for 61% of IPO funds. The total market value of new-economy companies on the Hong Kong Stock Exchange made up 27% of the total as of March 31.

With transparent rules, high predictability, a fast and flexible listing process, abundant liquidity, and accessibility to global investors including international institutional investors and Chinese mainland investors, the HKEX presents an appealing venue for companies from all over the world, especially new-economy companies, Bao said.

“The rules of the game in the Hong Kong market are clear, transparent and stable,” said the person close to Hong Kong’s regulators. “There is very little intervention by the government through administrative means.”

In the first six months this year, four Chinese companies completed secondary share sales in Hong Kong, raising HK$63.1 billion and accounting for 30% of the city’s total IPO fundraising. Last year, nine companies raised HK$131.3 billion, according to a report by KPMG. Deloitte, another global accounting and consulting firm, said it expects the trend to continue with more than 10 secondary offerings by mainland companies in 2021 and total fundraising of more than HK$100 billion.

For secondary share sales, the HKEX exempts some requirements as it assumes companies are already regulated by foreign authorities. It applies stricter requirements and more complex procedures to companies seeking a primary or dual primary listing.

The most recent dual primary offering in Hong Kong was by Chinese electric-vehicle maker Xpeng Inc. To be eligible for a secondary offering in Hong Kong, the issuer must have been traded for at least two fiscal years on another exchange. As the Guangzhou-based carmaker floated shares in New York only last August, it didn’t meet that requirement. Xpeng’s offering in Hong Kong received much stricter review from the HKEX than from U.S. regulators, according to the person close to the share sale.

Another advantage of a dual primary listing is that companies can be included in one of the stock connect programs —trading links between the Shanghai and Shenzhen exchanges and the HKEX — to tap into deep-pocketed mainland investors, Bao said. Under the current rules, Xpeng can be included in the stock connect program as soon as six months after its debut.

None of the companies with HKEX secondary listings have been included the stock connect program, including Alibaba, NetEase Inc. and JD.com Inc. Hong Kong is in close contact with mainland regulators to change the situation, the person close to Hong Kong regulators said. HKEX Chairman Shi Meilun said publicly that she wishes this could happen soon.

Wei Yiyang contributed to this report.