In Depth: Why Hong Kong Is Poised to Benefit From a Rush of China Listings 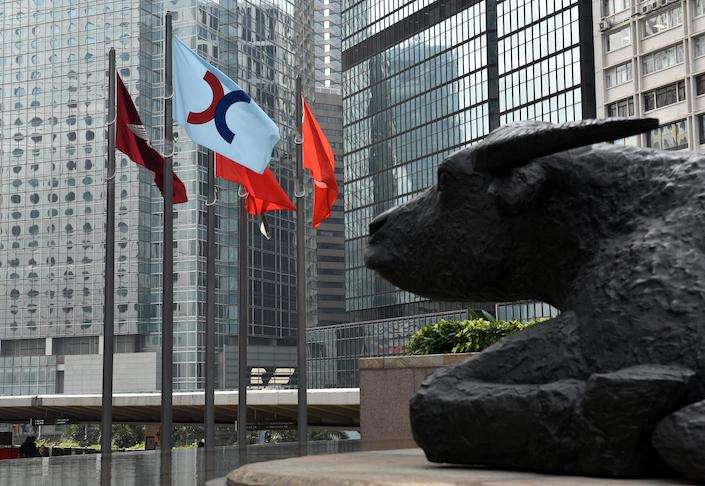 Twenty years ago, 29-year-old Ding Lei led his internet startup NetEase to Nasdaq as one of the first Chinese tech companies to float shares in the U.S. But on the debut day June 30, 2000, the company’s American depositary receipts dropped nearly 22%.

Twenty years later, Ding struck a gong at the Hangzhou headquarters of the company he founded to celebrate its listing on the Hong Kong Stock Exchange. The debut was a hit this time. The stock closed 6% above its offering price.

NetEase is the largest Chinese mainland company to pursue a secondary listing in Hong Kong since Alibaba Group’s blockbuster offering in the city last November. An increasingly hostile regulatory environment in the U.S. is pushing publicly traded Chinese enterprises to seek secondary listings in Hong Kong.

On the heels of NetEase’s debut, Chinese e-commerce giant JD.com Inc. completed the second-largest share sale in Hong Kong this year. Other Chinese companies have also announced intentions to delist from the U.S. and float shares in Hong Kong, including internet search giant Baidu.

The migration of U.S.-listed Chinese companies to Hong Kong for secondary listings could attract as much as $557 billion to the Asian financial hub, American investment bank Jefferies estimated in a report.

After the $310 million financial reporting fraud of Chinese Starbucks challenger Luckin Coffee Inc., the American Senate cleared a measure that could lead to delistings of Chinese stocks that don’t comply with certain financial transparency requirements. The bill still needs to be approved by the House of Representatives, but it enjoys broad bipartisan support.

Earlier this month, U.S. President Donald Trump ordered financial regulators to recommend actions he could take against U.S.-listed Chinese companies. In a “Memorandum on Protecting United States Investors from Significant Risks from Chinese Companies,” Trump accused Chinese companies of posing a significant risk for investors and asked the President’s Working Group on Financial Markets to submit an action plan within 60 days.

Nasdaq recently also proposed rules intended to impose stricter requirements on companies looking to go public that have their businesses principally administered in certain jurisdictions defined by Nasdaq as “restrictive markets,” including China, or whose auditors’ qualifications raise concerns.

U.S. Secretary of State Mike Pompeo released a statement in support of Nasdaq’s proposed rules. “Nasdaq’s actions should serve as a model for other exchanges in the United States, and around the world,” he said.

Nasdaq’s proposed new rules will require companies from restrictive markets to raise a minimum of $25 million in initial public offerings (IPOs) or at least a quarter of their post-listing market capitalization. This threshold would have pushed many smaller Chinese companies out the door, such as biotechnology company AnPac Bio-Medical Science Co. Ltd., which raised $16 million in its Nasdaq IPO in January.

The targeted policy is unfair to Chinese companies, a listing executive at a Chinese investment bank told Caixin.

“It is normal for investors to have bias, and some Chinese companies have indeed done poorly, making investors get the goods on them,” the executive said. “But if a market is generally biased and such external factors affect reasonable valuation, Chinese companies will certainly give more consideration when choosing where to list their shares.”

Stephen Chan, a partner of law firm Dechert LLP in Hong Kong, said many clients that originally considered U.S. IPOs have changed their plans amid regulatory concerns. He said he expects the migration of Chinese companies from the U.S. to Hong Kong and the Chinese mainland won’t be just a momentary hot spot, but potentially a long-term trend.

The decision to list shares in China is both a response to regulatory changes and a reflection of companies’ long-term, strategic considerations, said Pang Ming, head of Macro and Strategic Research at China Renaissance Securities (Hong Kong). Chinese companies are expected to benefit from higher market awareness, valuation, liquidity, trading volume and fundraising ability in their home market, Pang said.

Despite the tightening trend, American markets still have advantages, analysts said. Qualified large companies with solid fundamentals may still use U.S. exchanges, CMB International Capital Corp. wrote in a note to investors. At the same time, CMB said it expects that significantly fewer medium-to-small Chinese companies will choose to list in the U.S. and that especially those involved in sensitive sectors such as cyber security will voluntarily delist from American exchanges.

Until recently, Hong Kong was not a preferred listing destination for new-economy companies because of relatively conservative investors, limited liquidity and a higher weight of old-economy companies. In 2014, the loss of technology giant Alibaba’s listing to the U.S. prompted a long-awaited overhaul in Hong Kong’s listing rules.

Alibaba originally wanted to float in Hong Kong. But it chose New York for its record $25 billion IPO after Hong Kong refused to accept the company’s dual-class share structure as conflicting with its “one share, one vote” principle.

After three years of debate and consultation, the Hong Kong Stock Exchange in late 2017 amended its rules to allow listings of companies with dual-class shares as well as pre-revenue biotech companies and secondary listings of overseas-listed mainland companies.

The changes immediately attracted some of the largest listings by Chinese tech companies, including smartphone maker Xiaomi and online services provider Meituan Dianping, followed by Alibaba in November last year.

A total of 84 new-economy companies, including health-care and biotech companies, have listed in Hong Kong since the new rules took effect in April 2018, generating HK$302.3 billion ($39 billion) and accounting for more than half of the IPO funds raised during the period, according to Hong Kong Exchanges and Clearing Ltd. New-economy companies now account for 17% of Hong Kong’s total market capitalization.

To further lure mainland-based companies, Hong Kong is also amending its rules to include companies traded in the U.S. that have secondary listings in Hong Kong in the city’s benchmark Hang Seng Index. The earliest inclusion will be August, Hang Seng Indexes Co. Ltd. said.

The change means Alibaba, Xiaomi and Meituan Dianping will be included in the index. Alibaba could account for as much as 3.8% of the benchmark index and 5% of the Hang Seng China Enterprise Index, driving passive fund flows of $450 million to $650 million to the Hong Kong market by funds that track the indexes.

“The evolution of the Hang Seng Index over the next 18 months will largely shift the index to a pure China one with a significant tech, e-commerce and IT weighting,” Jefferies said.

Investors don’t need to worry about a decline in the quality of the Hong Kong stock market as a result of a rush of U.S.-delisted Chinese companies because the Hong Kong exchange also has strict listing requirements, said Chan from Dechert. If those companies don’t meet U.S. regulatory requirements, they are unlikely to qualify for listing in Hong Kong as well, he said.

Compared with the nearly $40 trillion U.S. stock market, the Hong Kong market is much smaller, with about a 10th of its rival’s market capitalization and liquidity. Currently, secondary listings in Hong Kong account for less than 5% of the companies’ total equity, a Hong Kong financial market analyst told Caixin.

The limited liquidity means a large inflow of listings could drag down the valuation of new-economy companies because investors can’t allocate enough capital for each new issuer, the analyst said. Hong Kong also imposes the highest stamp duty on stock trading, which may impede a large capital inflow, he said.