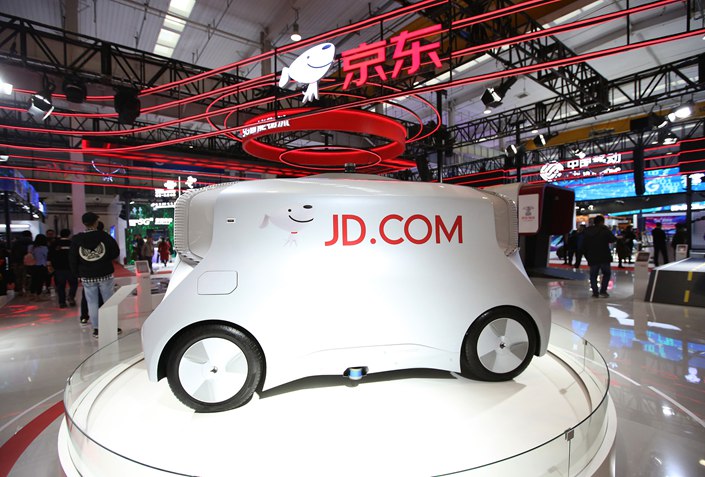 Chinese e-commerce giant JD.com Inc. is seeking to raise as much as HK$31.4 billion ($4.05 billion) in a secondary listing in Hong Kong, joining a growing tide of Chinese companies seeking to be traded on more than one exchange amid rising China-U.S. tensions.

The Nasdaq-listed company plans to offer 133 million new shares at as much as HK$236 apiece, according a preliminary prospectus filed by JD.com Friday. The upper limit of the pricing presents a 7.8% premium on JD.com’s Thursday closing price of about HK$219 in New York. The company will start taking investor orders around June 11, according to the prospectus.

JD.com issued its new listing plan the same day as a presidential memo from the Trump administration calling for increased scrutiny of U.S.-listed Chinese firms, amid escalating tensions between Washington and Beijing. Earlier this week, Nasdaq-listed NetEase Inc. kicked off a $2.6 billion share sale in Hong Kong.

Last month, the U.S. Senate approved a bill that could force Chinese companies to delist from American stock markets if they fail to comply with the country’s regulatory audits for three consecutive years. The measure hasn’t cleared the House of Representatives.

JD.com said that the proceeds from its Hong Kong listing will be used to improve operational efficiency and customer experience, with a focus on key technological innovations to its supply chain, according to a filing to the Hong Kong Stock Exchange. The filing did not disclose how much the company expects to raise or when it will start taking investor orders. Bank of America Corp., UBS Group AG and CLSA Ltd. are sponsoring JD.com’s share sale in Hong Kong.

The e-commerce giant is following in the footsteps of Alibaba Group Holding Ltd.’s $13 billion Hong Kong listing last year, which received homecoming hoorays from the city’s stock exchange, which had lost many big Chinese tech listings to U.S. bourses because it didn’t allow dual-class share voting at that time. The requirement has since been relaxed.

JD.com’s latest shareholding disclosure showed that its founder and chairman Richard Liu still controls an overwhelming 78% of the voting power in the company due to its dual-class share structure. That’s despite the fact that he quietly stepped down from leadership positions at multiple JD.com subsidiaries at the end of 2019, a year after he was arrested by Minnesota police on suspicion of rape. Liu was never charged.

According to the company’s latest disclosure, Liu holds 14.7% of JD.com’s shares. Tencent remains its biggest shareholder with a 17.8% stake. Global retail chain Walmart, another strategic investor, holds 9.8% of the shares.

Liu announced earlier last year that he would loosen his grip on JD.com after his high-profile arrest raised concerns among investors that he held too much power under the company’s concentrated ownership and decision-making structure.

In the first three months of this year, JD.com reported its net profits plunged more than 85% year-on-year to just over 1 billion yuan, even as its revenues jumped 20.7% to 146.2 billion yuan.

The company employed more 220,000 people, including more than 130,000 logistics staff at the end of last year.