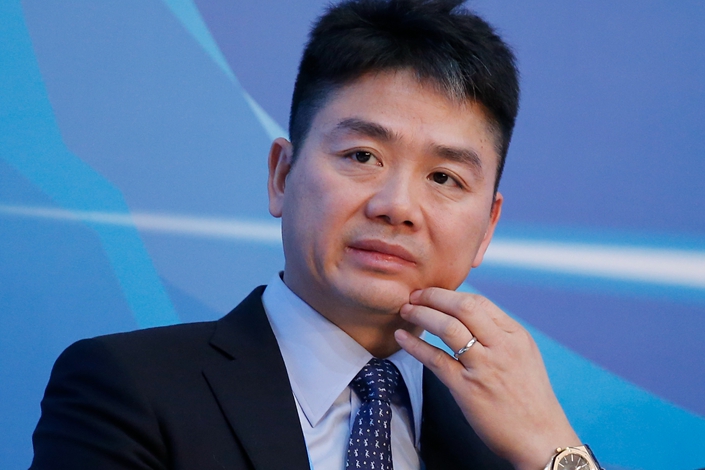 JD.com Inc. Chairman Richard Liu has held on to control of at least two key subsidiaries of the e-commerce giant, even as he has spent the last few weeks giving up leadership positions on paper.

Liu’s retention of control suggests that key-man risks persist for JD.com, despite his announcement last year that he would loosen his grip on the company. Liu’s arrest on suspicion of rape in 2018 raised concerns that he held too much power under JD’s concentrated ownership and decision-making structure.

Liu has quietly stepped down from top jobs at multiple JD.com subsidiaries over the last few weeks, including the company’s logistics, cloud computing, and health care units, changes in business registry records show.

The reality on the ground may be different. Public records show Liu still holds the controlling stake of a company registered in Xi’an that fully controls JD Logistics. He also indirectly controls the subsidiary which runs JD.com’s cloud computing unit.

A day before that, Liu and his assistant stepped down from the same positions at the legal entity of JD.com’s cloud computing unit, Jingdong Longyun Technology Co. Ltd. One of JD.com’s seven founding members, Xin Bo, is now listed in all three positions.

Since November, Liu and his assistant have also handed over their positions at four other subsidiaries operating JD’s health care business. Open business records show that at least three of them are now controlled by a legal entity in Liu’s hometown, Suqian, a city in the wealthy eastern province of Jiangsu. Li Yayun, chief compliance officer of JD.com, is the Suqian company’s biggest shareholder with 34%. Xin Lijun, who heads JD’s health care business, holds a 33% stake. A JD representative told Caixin that Richard Liu does not hold any shares in the Suqian company, either directly or through an intermediary.

In addition to removing himself from some formal management roles at JD, Liu resigned as a member of the country’s top political consultative body in November, state broadcaster CCTV reported.

Liu said that he would hand off JD.com businesses to others in the management team during JD’s third-quarter earnings call last year, in order to “focus on new business lines, strategy, corporate culture and team building” in 2019.

The announcement came a few months after Liu spent a night in jail when he was accused of rape by a student in the U.S. state of Minnesota. At the time, prosecutors were still weighing whether to bring criminal charges against him, and JD.com stock was in freefall.

While prosecutors ultimately decided not to press charges, the episode highlighted JD.com’s key-man risk, a corporate governance risk stemming from absolute control of a company by any one individual, analysts said.

A few months after the scandal, a long-time institutional investor in JD.com told Caixin that “there is no one” who can replace Liu to run JD.com, and that the scandal both hurt Liu’s image and affected JD.com’s relationship with some business partners. Liu maintains overwhelming voting power with 79.5% control, and holds 15.5% ownership, second only to Tencent’s 18%.

Most of the decision-making power in JD.com remains concentrated in Liu’s hands. According to JD.com’s 2018 financial report, as long as Liu remains a director on the company’s five-member board, it cannot make any decisions in his absence.

JD.com has made several attempts to decentralize power since 2014, but progress has been slow. JD Mall, the company’s biggest business unit, adopted a rotating CEO mechanism in July last year after years of repeated delays. In January of the same year, the company conducted a major internal restructuring and named three senior vice presidents to lead JD’s three primary business divisions. The retail, finance and logistics units had previously been integrated under the same leadership, which Liu sat at the top of.

In contrast, JD’s biggest rival Alibaba Group has taken pains since 2010 to set to distribute decision-making powers among 38 key executives. That partnership mechanism helped pave the way for founder Jack Ma to hand over his chairmanship to his right hand Daniel Zhang, as well as empower younger executives. Ma stepped down from Alibaba’s day-to-day operations in September, though the famed entrepreneur remains actively involved in the company’s publicity worldwide.

JD.com reported revenue growth of 28.7% year-on-year in the third quarter, taking in 134.8 billion yuan. Logistics and other services contributed 6 billion yuan, but retail business remains its primary source of income, accounting for 95.5% of revenue.