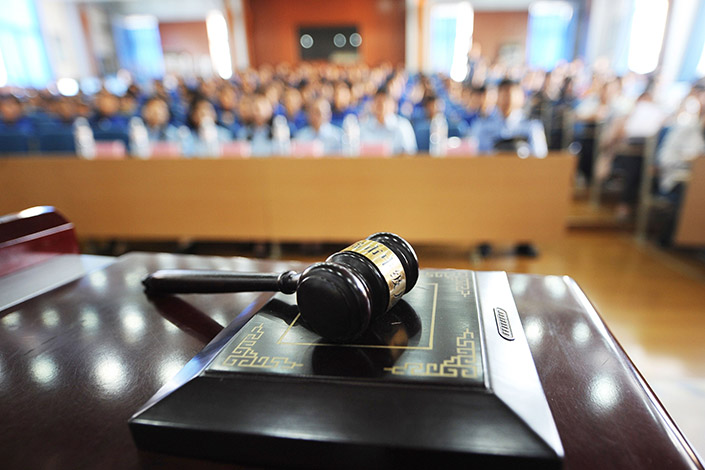 The announcement comes as the commission is carrying out a nationwide inspection of the country’s law enforcement and justice system. Photo: VCG

The Chinese Communist Party’s central legal and political body has warned government, law enforcement and court officials against illegally interfering in judicial cases, sharing stories of seven former officials that have been punished for this type of misconduct.

The former officials — mostly from local courts, police departments and prosecutor’s offices — have been punished for wielding their influence for personal gain or otherwise having improper contact with people involved in legal cases, according to a statement (link in Chinese) issued Saturday by the Central Political and Legal Affairs Commission.

The announcement comes as the commission is carrying out a nationwide inspection of the country’s law enforcement and justice system, urging officials to strictly follow a set of years-old regulations that prohibits them from having improper involvement in judicial cases.

And last year, the Central Political and Legal Affairs Commission, the Central Commission for Discipline Inspection and the National Supervisory Commission jointly issued another set of guidelines, urging the “three regulations” to be strictly implemented.

In September, Wu Bangsheng, former president of the Baoshan Intermediate Court in Southwest China’s Yunnan province, was dismissed from his post, removed from the party and transferred to the judicial authorities for further proceedings for repeated offences, according to Saturday’s statement.

In another case, Pang Feng, a former official in Linquan county, East China’s Anhui province, was sentenced to 10 months in prison and fined 100,000 yuan ($15,462) for offering bribes to a local prosecutor to get favors in a case the prosecutor was handling.

The example cases also include Zhou Jun, a former officer at a prison in Central China’s Hubei province, who accepted cash and gifts from the relatives and friends of three prisoners to help them get their sentences reduced. Zhou was sentenced to nine months in prison.