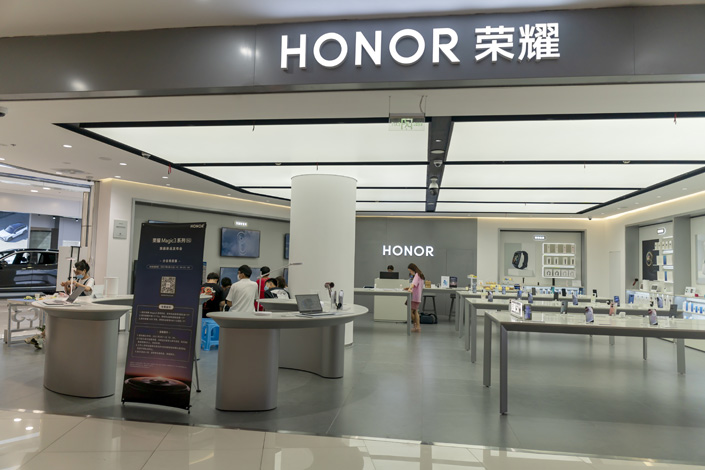 Honor Device Co. Ltd. has been rebuilding its presence in China’s competitive smartphone market since being cut loose from Huawei Technologies Co. Ltd. last year to avoid being caught in the crosshairs of the China-U.S. tech cold war.

At a company event on Wednesday, Honor CEO Zhao Ming talked up the firm’s rebound in the China market, where its share grew to 16.2% from 3% in November, when Huawei sold Honor to a Chinese government-backed consortium in exchange for an opportunity to keep the brand’s industry chain intact amid the U.S. sanctions.

“Next year’s Honor smartphone sales are expected to be much bigger than this year,” Zhao said in a group interview after the event, basing his estimate on the company’s persistent efforts to restore its supply chain and introduce new handsets. He didn’t give specifics.

Honor’s recovery comes even as overall smartphone shipments fell 11% year-on-year in the second quarter, according to consultancy IDC, and as onetime leader Huawei took a sales hit in the aftermath of a U.S. tech export control policy limiting it from accessing microchips made with U.S. technology.

Zhao predicted that the market downturn would persist until the third quarter with the sub-1,000 yuan ($155) price segment expected to be hit hard as consumers stick with their current phones for longer before upgrading. The average life cycle of an Honor phone stands at 25 months, compared with an average of 22 months for all brands, Zhao claimed.

Established by Huawei as a low-end sub-brand in 2013 to take on the likes of Xiaomi, Vivo and Oppo in the budget phone segment, Honor is now setting its sights on premium phone users with plans to create products on a par with Apple’s iPhones.

The first major step toward going upscale was taken in August, when Honor unveiled its first high-end Magic 3 series priced in a range of 4,599 yuan and 7,999 yuan and preinstalled with Google Mobile Services, meaning that Magic 3 owners will have access to popular Google apps like Google Play and Gmail.

At Wednesday’s event, Honor also rolled out a camera technology capable of enhancing the sharpness of pictures taken with phones. Zhao said that the new technology, which was originally developed for Honor’s future devices, will also be incorporated into the Magic 3 through the phone’s over-the-air update function.

Despite being separated from Huawei, Honor is still facing risks of being placed on a U.S. economic blacklist. In August, a group of 14 Republican lawmakers in the U.S. House of Representative urged the U.S. Commerce Department to add Honor to its Entity List, Reuters reported, putting the former Huawei unit at risk of being banned from buying U.S. technology and software. Huawei was placed on that list in May 2019.

“Honor has been complying with foreign countries’ laws and regulations since its establishment,” Zhao said.