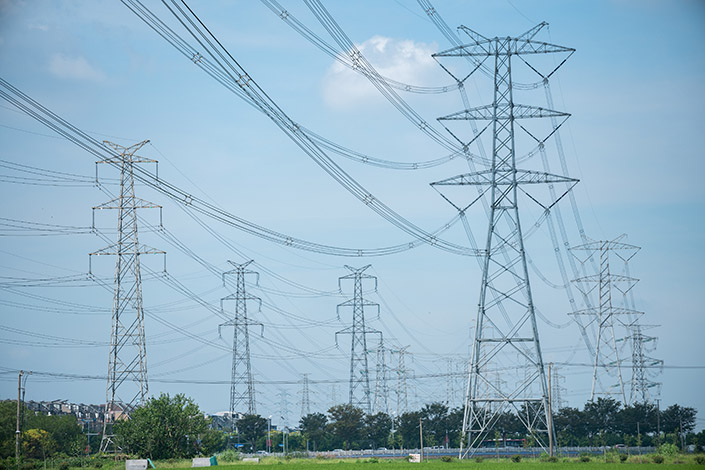 Wires run from one high-voltage power transmission tower to another in Shanghai on Aug. 29. Photo: VCG

Electric utilities in a handful of Chinese provinces are raising power prices after a nod from the nation’s top economic planner, which is grappling with the contribution of record-high coal prices and withering stockpiles to a worsening power crunch.

Coal-fired power plants in Ningxia, Shanghai, Shandong, Guangdong and parts of Inner Mongolia have increased their fixed rates charged to grid operators by 10%, the maximum allowed under national regulations, a Caixin analysis shows.

Surging coal prices have meant that producers have been selling power below cost, which has greatly lowered the incentive to generate electricity and stockpile coal ahead of the winter heating season. This, together with government mandated cuts to coal mining capacity since 2016 and power conservancy measures to meet carbon emission goals, have contributed to regional outages and rationing.

“Prices will be allowed to reasonably reflect changes in power demand and supply, as well as costs,” said the National Development and Reform Commission (NDRC) in a Q&A posted online (link in Chinese) on Wednesday. It was the first time China’s top economic planner had addressed the nation’s growing power crunch.

After power prices had long been strictly regulated in China, the government launched a new floating mechanism on Jan. 1, 2020, which is based on market prices through negotiations or bidding in order to lower on-grid prices and push the coal market to be more buyer-oriented.

In the central province of Hunan, rates will be allowed to go higher than the capped 10% hike after a coal-electricity price mechanism is triggered starting October, according to a document from Hunan’s Provincial Development and Reform Commission.

The agency said on Monday it will start a new mechanism in October that will link the coal market to industrial power prices. Once prices for coal bought by power plants surpass 1,300 yuan ($201) per ton, for every 50 yuan increase, electricity sale prices will increase by 0.015 yuan per kilowatt-hour (kWh).

Hunan was one of nine provinces including Guangdong, Shandong, Anhui, Guizhou, Liaoning, Heilongjiang, Jilin, and Inner Mongolia to have been forced to ration electricity because high coal prices have led to weakened willingness to generate power and insufficient coal stockpiles at power plants, said CICC analyst Liu Jiani in a Tuesday note.

It is hoped the new revisions to the pricing structure will help ease the current power crunch, which has seen factories in Shantou, Guangdong ordered to shut down for an entire week after the city suffered a shortfall of 932,000 kWh last Thursday. The same day, the boomtown of Shenzhen had a power deficit of 2.8 million kWh, leading to the forced closure of factories for four days every week.

Production cuts across China, if prolonged, could knock 1 percentage point off GDP growth in the fourth quarter, led by materials producers, with continued upstream supply restrictions and power shortages also weighing on infrastructure projects, according to a Morgan Stanley research report dated Sept. 26.

In a further sign of how desperate the situation is getting in some areas, the State Grid Hunan Electric Power Co. Ltd. last Wednesday recommended that areas across the province also curtail usage by shutting down power-hungry building facade and landscape lighting and large billboards during peak hours.

“China's energy supply is guaranteed this winter and next spring,” according to the NDRC. “We have the resources, conditions, and ability to ensure that people will pass the winter warm and safe.”

The NDRC also addressed the issue of coal supplies, saying the country will “moderately” increase coal imports and directed major coal producing regions such as Shanxi, Shaanxi, and Inner Mongolia to “make every effort to increase production and supply.” Big industrial users should try to conserve power, it said.

It also instructed power generation and heating firms to increase their purchases of imported coal. According to the China General Administration of Customs, the nation imported 10.3% less coal in the first eight months of the year, or a total of 198 million tons.

That was partly down to the suspension of coal imports from Australia after geopolitical ructions, as well as other factors. On Sept. 27, Han Jun, the governor of China’s frosty northeast province of Jilin, directed heating and power firms to import more coal from Russia, Mongolia and Indonesia.

Consequently, domestic prices have soared, with the CECI Coastal Index, which reflects purchase price levels, at 1,086 yuan per ton for 5,500 kcal/kg thermal coal for the week to Sept. 24, nearly doubling from a year ago, according to the China Electricity Council. Thermal coal futures in China reached 1376.8 yuan per ton on Wednesday, before closing at 1,308.8 yuan per ton, down 1.51%.

According to an employee at a private power plant in Guangdong, coal inventories on Sept. 16 at key provincial power plants were less than 2.4 million tons, down nearly 60% year on year.

In fact, since late February, after measures to guarantee winter coal supplies were withdrawn, signs of domestic coal supply-demand imbalances have appeared and prices began to rise.

On Sept. 27, a coal market analyst told Caixin that the spot price for 5,500 kcal/kg thermal coal at northern ports had risen to approximately 1,600 yuan per ton, 1.6 times above the same period last year. “I have been in this business for more than 10 years, and I have never seen anything like this,” he added.