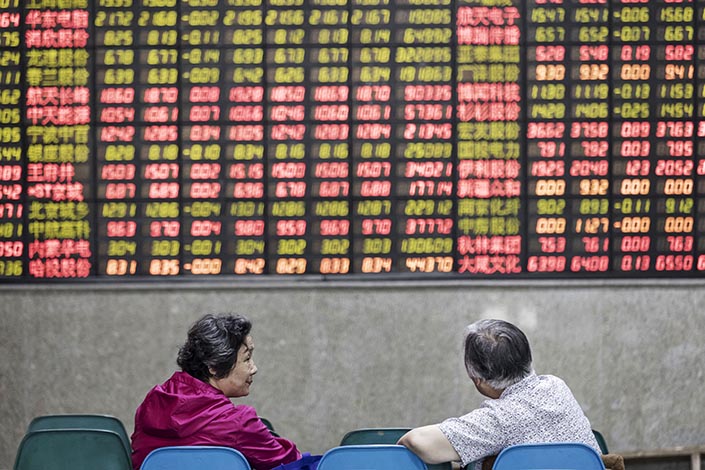 (Bloomberg) — China’s financial markets are set to open for the first time in a week on Friday, with investors bracing for volatility from a surprise default in the property sector coupled with the global energy shortage.

The Golden Week holiday offered a rare respite from a months-long regulatory onslaught that’s sent shock waves through the world’s financial markets. As trading resumes, focus will be on where Beijing will strike next and the impact of Fantasia Holdings Group Co.’s dollar-bond default this week, the first in the industry since China Evergrande Group sank deeper into crisis.

There will be intense interest in how the People’s Bank of China can keep liquidity ample given the wall of short-term debt due this month. About 340 billion yuan ($53 billion) of 14-day reverse repurchase agreements will mature on Friday when onshore markets reopen.

Chinese stocks listed in Hong Kong are about 0.2% lower since onshore markets last traded. On Wednesday, they dropped to levels not seen since China’s equity bubble burst in 2016, before rebounding on Thursday. The offshore yuan was little changed.

Sentiment among Chinese investors “has recently recovered to a neutral level, but the trend is decidedly downward and the upside is capped by recent domestic default stories,” said Olivier d’Assier, head of APAC applied research at Qontigo. “The main issues affecting sentiment have been purely domestic so far, but on the geopolitical front, the U.S.-China trade talks have yet to take place and this issue remains unresolved.”

Relations with the U.S. are under the microscope after news that President Joe Biden plans to meet President Xi Jinping virtually by year end. U.S. Trade Representative Katherine Tai is also set to speak to Vice Premier Liu He in coming days, with the two countries still at loggerheads over China’s commitments in the January 2020 trade deal.

Here’s what to watch out for when business resumes:

Stocks in Hong Kong were choppy while the mainland was away. A selloff in technology names sent the Hang Seng Tech Index to record lows on Wednesday before rallying Thursday. Health-tech shares like JD Health International Inc. and Alibaba Health Information Technology Ltd. were among the names that tumbled, while other big-cap names like Tencent Holdings Ltd. and Meituan saw five straight days of losses before Thursday’s recovery.

Property investors were spooked after Fantasia defaulted on a dollar bond. Chinese property stocks like Sunac China Holdings Ltd. and China Aoyuan Group Ltd. both saw plunges of over 10% on Tuesday as fears grew over highly leveraged developers.

“There might be a little bit of fear about what is happening, the contagion effect,” said Jun Bei Liu, portfolio manager at Tribeca Investment Partners. She expects the markets to be “flat or modestly positive,” with some weakness in the property sector.

The missed payment by Fantasia and the Evergrande uncertainty prompted a sharp selloff in China’s offshore debt market. Wild bond swings were accentuated by thin liquidity during the holidays.

Traders are watching to see if the return to desks in the Chinese mainland can provide a steadying influence, as investors digest the rising default risks in the debt-laden property sector. China’s onshore AA-rated corporate bonds, which are considered junk-level on the mainland, will remain in the spotlight. A further widening of their spreads to government debt could take the gap to the biggest in about a year.

The onshore yuan, which has traded in a tight band of slightly more than 1% since July, may stay boxed in that range in the near term as there was little activity in the offshore counterpart during the week-long holidays. However, a gauge that tracks China’s currency versus 24 peers is around the highest level since early 2016.

The central bank added a net 790 billion yuan via open market operations since Sept. 17 in 10 consecutive injections. That’s the longest string of short-term funding since August 2020, when the PBOC boosted cash in the financial system for 13 days.

Overnight interbank funding costs spiked 78 basis points to 2.27% on Sept. 30, the biggest intraday jump since January. The cash tightness was spurred by higher demand from banks at quarter end for regulatory checks and tax payments, with the week-long holiday exacerbating the issue.

Commodities traders will be anxious to play catch-up after a turbulent week for materials and energy.

Thermal coal will trade after ending last week near a record high on the Zhengzhou Commodity Exchange. Since then, more details about China’s plans to boost supply at all cost have trickled out, India’s shortage of the fuel has heightened, and markets for substitute fuel natural gas have whipsawed amid European shortages and Russian promises to help stabilize markets.

Crude traders will be keenly watching fuel oil on the Shanghai Futures Exchange to see how natural gas turmoil affects the product. Asian buyers are paying top dollar for a variety of fuels as they seek alternatives to increasingly pricey gas.

Metals traders will be bracing for volatility with markets for steel, iron ore, copper and others reopening, with a focus on how power shortages in the country will affect both output and consumption of the materials.

Palm oil and soybean meal may be set for sharp moves, with China’s energy crisis seen severely affecting the processing industry. Several soybean crushing plants were forced to shut, leading to a continuous slide in soybean meal inventories that have boosted prices of animal feed. Palm oil futures in Kuala Lumpur surged to a record while China’s been away.

Investors will also be closely watching retail and consumption data from the holiday to gauge the strength of the economy and the market’s ongoing recovery from the coronavirus outbreaks. The number of trips taken on China’s road, rail and other transport networks on Tuesday was 34% below 2019 levels, according to the transport ministry.

There was brighter news for cinemas, with movie ticket sales over the first five days at 3 billion yuan compared with 2.7 billion in the same period of 2020, according to ticketing company Maoyan. In a note on Monday, Citigroup Inc. said that box office sales in the first three days of the holiday were better than expected, though total sales will likely trend below the 2019 record.

Meanwhile, consumer goods such as Moutai liquor and Pu-er tea are in focus after Beijing on Tuesday banned loans for speculating on certain luxury consumer goods to prevent the “disorderly expansion of capital.” Kweichow Moutai Co., China’s most valuable stock and producer of premium baijiu has been working to ease regulatory scrutiny over distributors’ hoarding of bottles and bidding up prices.