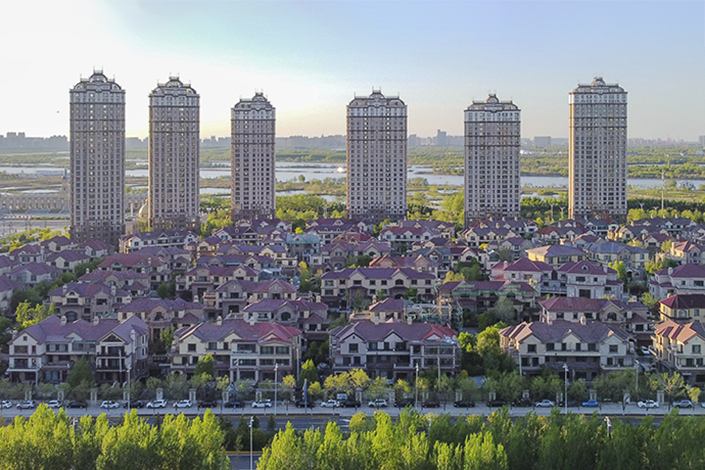 Buildings stand along the Songhua River in Harbin, Northeast China’s Heilongjiang province, on May 15. Photo: VCG

A slew of measures issued by Harbin, capital of Heilongjiang province, aims to promote its real estate market’s “stable and healthy development,” a local state-owned news site reported (link in Chinese) on Saturday. The measures took effect on Oct. 1, and will last until the end of next year.

China’s property market has seen sales slide and some large developers are facing a liquidity crisis due to their aggressive expansion and regulators’ deleveraging campaign. Analysts said the moves by Harbin could augur similar actions by other local governments.

Harbin’s measures include easing restrictions on the cash from developers’ pre-sales.

In China, revenue from property pre-sales usually must be deposited into regulator-supervised accounts as an anti-embezzlement measure. Developers can apply to withdraw the money in phases as construction on the property progresses. Harbin has decided to boost the amount that developers can take out at each phase by 20% under certain conditions. The government also directed lower-level authorities to support property firms’ sales promotion campaigns.

On the demand side, the Harbin government decided to offer subsidies to certain first-time homebuyers, with as much as 100,000 yuan ($15,540) on offer to young individuals with college degrees or vocational school diplomas.

The tweaking of Harbin’s property policies shows the government is actively responding to the cooling market that has been disrupted by some developers’ crises, Zhu Jin, a property analyst at brokerage China Securities Co. Ltd. wrote in a note (link in Chinese).

Since last year, regulators have stepped up efforts to defuse the property industry’s debt risks, including setting caps on financial institutions’ loans to the sector. Due partly to diminishing access to funding, some property giants, most notably China Evergrande Group, have fallen into crisis, sending shockwaves through the market and panicking investors.

To stabilize the market, some local governments have directed developers not to cut prices too much. Local governments in at least seven cities — including Yueyang in Hunan province and the Hebei province cities of Tangshan and Zhangjiakou — have held discussions on the matter with property firms or set limitations on discounts, analysts at real estate data collector China Real Estate Information Corp. wrote in a report (link in Chinese) late last month.