By Bao Zhiming and Kelsey Cheng 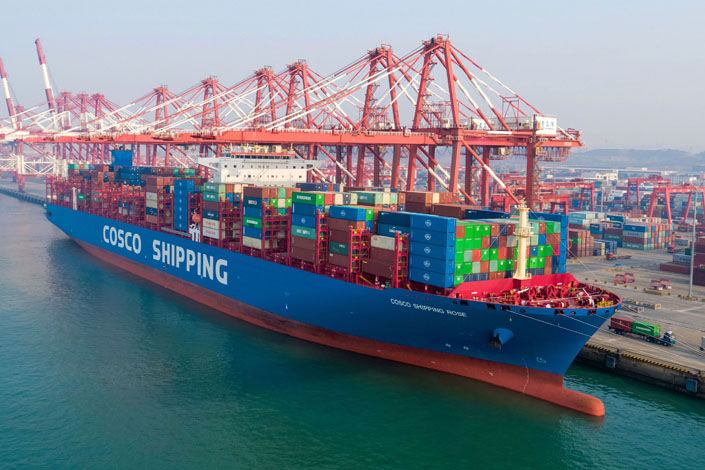 The ongoing global supply chain crisis triggered by the Covid-19 pandemic is not likely to ease any time soon, according to an executive at China’s largest container carrier, as increased shipments from China ahead of year-end holidays have caused bottlenecks at ports.

Soaring demand for Chinese-made goods in the U.S. and Europe has squeezed and disrupted global supply chains given China’s central role in them, said Feng Bo, deputy general manager of state-owned China Cosco Shipping Co. Ltd. at the 2021 Fortune Global 500 Summit in Hangzhou on Tuesday.

“As the pandemic is not yet fully under control, under such circumstances, it is quite difficult to resolve the disorder in the global supply chain in the short term,” said Feng. Cosco Shipping is the third-largest container carrier in the world, with a fleet of 498 container vessels and a capacity of 3 million twenty-foot equivalent units (TEUs), according to company data.

Feng’s comments come as transportation bottlenecks exacerbate supply chain shocks across multiple industries due to prolonged Covid-related shutdowns. This has forced manufacturers including Apple, Samsung and Toyota to cut production due to a lack of key components and retailers to rush to restock inventories amid shipping costs that have skyrocketed since the beginning of the pandemic.

The benchmark Shanghai Containerized Freight Index —which shows the weekly fluctuation of spot freight rates in Shanghai — stood at 4,588.07 points on Friday, down from a historic high at the beginning of the month, according to data released by the Shanghai Shipping Exchange. However, that figure is still more than five times higher than its lowest point of 820 last year.

The cost of shipping quoted by freight forwarders for a 40-foot container from Shanghai to Los Angeles soared to more than $30,000 at one point this year, 1,900% higher than pre-pandemic rates.

Feng said the government and Chinese shipping and logistics companies have worked hard to ease pressure and stabilize the supply chain, including measures such as adding China-Europe freight trains and increasing shipping capacity.

This year, Cosco Shipping saw its capacity on trans-Pacific routes increase by 17% from a year ago, while that of intra-Asia routes increased by 12%, according to Feng. On Friday, the company also launched opened two additional express lines from China to Canada.

“These measures to boost capacity have played a relatively good role in alleviating the tension in the supply chain,” Feng said, but noted that shipping is only one part of the equation. Right now, logistics and port staff in Europe and the U.S. are not working at capacity due to pandemic-related restrictions, resulting in low efficiency.

For example, there were a total of 66 container ships stuck waiting off the ports of Long Beach and Los Angeles, two of America’s biggest, on Monday, with an average queuing time of 12.3 days, according to Feng.

Read more
Cost of Shipping Between China and U.S. Plunges

“In the port of Los Angeles, it takes several days of waiting before available trucks can transport the shipment after containers are unloaded,” Patrick Donnelly, a senior associate at Third Bridge, told Caixin.

Right now, due to the supply chain slowdown, a lot of companies in Europe and the U.S. are unable to achieve or maintain their desired inventory levels. This means they can’t be fully prepared for the upcoming peak Christmas spending season, and the sight of empty shelves could be more serious than in the past several decades, Donnelly said.

In the first three quarters of the year, China’s foreign trade value expanded 22.7% from a year earlier to 28.33 trillion yuan ($4.38 trillion), according to figures released on Monday by the National Bureau of Statistics (link in Chinese). Exports increased 22.7% year-on-year to 15.55 trillion yuan, while imports grew 22.6% to 12.78 trillion yuan.