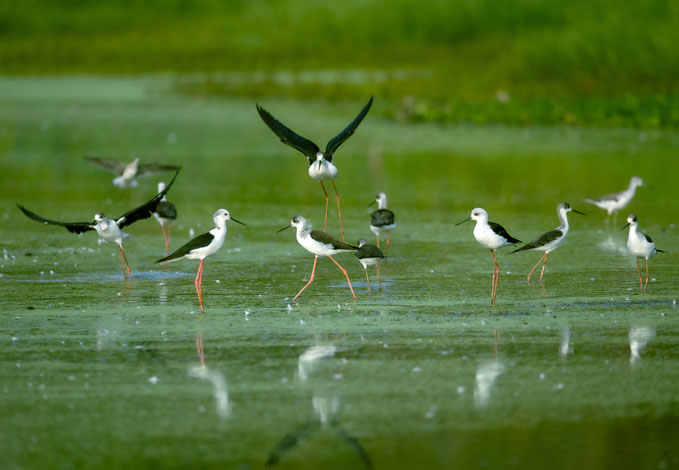 A flock of black-winged stilts congregate in the Poyang Lake Wetland in East China’s Jiangxi province on Sept. 15. Photo: VCG

A revised draft of China’s first law to specifically protect the country’s vast wetlands, which gives grassroots authorities a role in conserving wetlands, has been filed with the top legislative authority.

The draft was submitted Tuesday to the Standing Committee of the National People’s Congress for a second reading. The full text of the draft hasn’t been disclosed.

In January, a draft version was submitted to the top legislative body for a first reading. It’s common for drafts to go through three readings before they’re passed.

China has made several moves to conserve and restore its wetlands in recent years, including new regulations and establishing national parks. The country has more than 53.3 million hectares of wetlands, ranking first in Asia and fourth in the world, according to a government report.

Zhang Mingxiang, a professor of wetland ecology at Beijing Forestry University (BFU) who participated in the drafting of the law, told Caixin that the latest draft aims to expand the scope of wetland protection compared to the previous version, as well as clarifying the responsibilities of different government agencies and toughening punishments.

It also requires village and town governments, as well as rural and urban neighborhood authorities, to organize residents to participate in local wetland protection.

Although grassroots officials probably won’t have an enforcement role, stipulating their responsibilities can help solve the conflicts between the need to protect wetlands and residents’ interests, Zhang said.

In 2019, an environmental group called for a stop to tree-planting in coastal wetlands outside Shanghai, which were home to several local bird species, in an effort to protect the area’s ecological diversity. The forestation drive was being carried out as part of the financial hub’s development plan.

The revised draft also stipulated that those who drain natural wetlands or permanently cut off their water sources could be fined up to 1 million yuan ($156,340) if there is severe damage to the environment. The maximum fine is twice what it was in the previous draft.

Environmental protection is increasingly become a major priority for the Chinese government, which last year set the ambitious target of achieving carbon neutrality by 2060.