Blog: Chic Wet Markets Are All the Rage in China 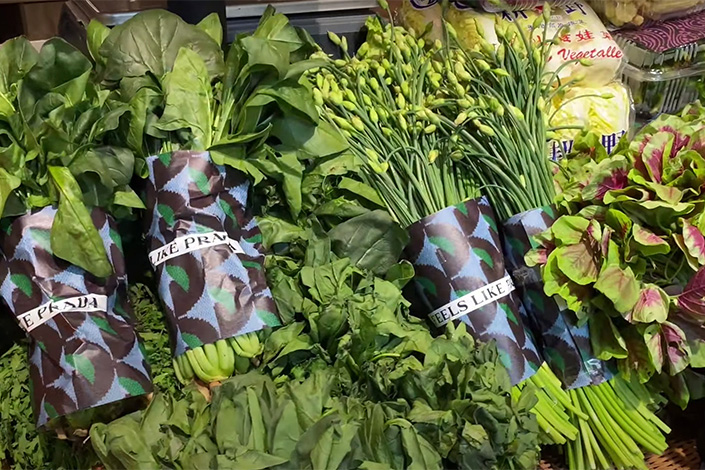 (ThinkChina) — Below-the-line marketing tactics of high-end brand Prada sees a wet market in Shanghai wrapping its walls, stalls and vegetables — yes, even the edibles — in Prada packaging. Lucky shoppers also get to receive limited edition Prada paper bags. And it's not just in Shanghai; trendy markets that have cafes, reading areas, exhibition spaces and bars are popping up in first-tier cities all around China.

A wet market in Shanghai has become the talking point of this year’s Golden Week holiday (from the country’s national day on Oct. 1 to 7) in China.

Over the course of the week, young shoppers donning fashionable outfits flocked to Shanghai’s downtown Wuzhong Market. At the market’s entrance or in front of fruit stalls, they posed for pictures toting vegetables wrapped in Prada packaging, finding the best angle to show off the brand.

It turns out that late last month, Italian luxury brand Prada collaborated with Wuzhong Market on a two-week pop-up event. All the stalls and exterior walls of the market were wrapped in extra-large Prada logos and motifs from the brand’s 2021 Autumn/Winter 2021 collection. Vegetables — everything from cabbage to carrots and eggs — were also wrapped in Prada packaging.

What got shoppers more excited was that those who spent at least 20 yuan ($3.10) at the market would receive a limited edition Prada paper bag, and this promotion lasted till Oct. 10. A vendor told Zaobao that most of those who frequent this market are usually those who live nearby. However, because of the pop-up, there have been many unfamiliar faces flocking to the market, ostensibly “to get the paper bags.”

This writer reached the market at 10 a.m. on Oct. 2, which coincided with the timing that Prada representatives came to distribute the limited edition paper bags to stall vendors. The 20-30 paper bags that each vendor received were snapped up within 10 minutes.

Sixty-year-old Auntie Li, who lives in the suburbs, got to know that Prada was coming to Wuzhong Market after scrolling through Douyin. She and her friends immediately made a trip to the market. They spent an hour on the subway to get to the city, but arrived too late and missed the chance to get a limited edition paper bag. But she heard from a vendor that the bags would be handed out again at 1 p.m., and thus decided to come back later to “join in the fun.”

Auntie Li grew up in the area. She told this writer that Wuzhong Market was just an ordinary market in the past. After it was transformed two years ago, it turned into a popular attraction for internet celebrities. “It’s so refreshing that Prada has landed here. It’s very creative to have a high-end brand collaborate with something so close to the common people. It would certainly allow more people to feel and experience a different kind of Shanghai,” she said.

This pop-up was organized in conjunction with the launch of Prada’s Autumn/Winter 2021 collection. Apart from Shanghai, Prada will also show off its Autumn/Winter collection prints in buildings of various architectural styles in Tokyo, Rome, Milan, New York and Paris, giving the streets in those cities a new look.

For a high-class international luxury brand to expand its platform into one of China’s rough-and-tumble markets has to do with the growing importance of the Chinese consumer market as well as the changing status of markets.

Prada’s financial reports show that its sales in the Asia Pacific market in the first half of this year was 600 million euros ($696 million), up by 35% as compared to 2019. This was mostly due to a 77% jump in the China market. In February this year, the group set a long-term growth strategy for the China market, including raising its brand profile and consumer experience through pop-up stores and immersive retail spaces.

With stronger purchasing power among China’s middle-income group, markets across the country are also upgrading and taking on a whole new mission. After Suzhou’s Shuangta Market was revamped in 2019, it became a multi-purpose integrated space comprising a market, eateries, performance area and bookstore, revitalising the old town area. Jianguomen Market (建国门菜市场) in Xi’an was redeveloped into a cultural creative area with food, accommodation, cafes, reading areas, exhibition spaces and bars for young people.

Sanyuanli Market in Beijing’s Chaoyang District was the first of China’s markets to go viral, providing a model for the transformation of other such markets.

This market was built in 1992; after publicity images were released in 2018, it became the venue for a book launch, and the collaboration turned the market into a marketing darling. In 2019, BMW did a makeover for Sanyuanli, turning the stall signs into neon green for a while. And in May this year, a food-themed calligraphy exhibition was held in Sanyuanli, bringing a literary atmosphere to the market.

Since 2018, Sanyuanli has been a must-visit for internet celebrities, and a photo spot for many we-media stars. These crowds of visitors are the best free marketing tool for Sanyuanli; however, when this writer visited Sanyuanli, she found that photos and videos are now prohibited in the market, because photo-taking has disrupted business for stallholders.