In Depth: Life on Pause in Ruili’s Endless Fight Against Covid-19 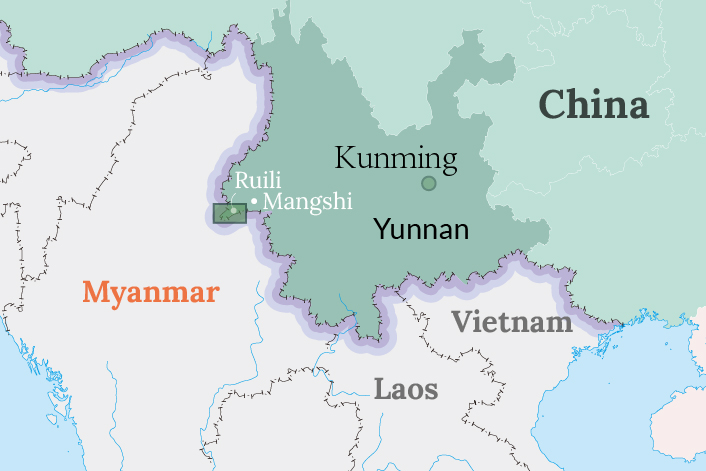 A resurgence of Covid-19 in July hit the pause button for southwest China’s border city Ruili and its 210,000 residents as strict control measures were imposed to tame the virus. Now, people are wondering when life can get back to normal as the disruptions have become increasingly costly.

Ruili, in Yunnan province on the border with Myanmar, has been stuck in semi-lockdown since early July when a cluster of delta variant infections emerged and sparked nationwide fears over a spread of the highly transmissible coronavirus. Local authorities quickly sealed off the areas with confirmed cases and imposed strict controls on movement in and out of the city.

While major outbreaks have been effectively contained, the restrictive measures have largely remained in place as cases continue to surface sporadically in the small city known as a trading hub for jade.

According to a briefing Saturday by city authorities, Ruili has reported two domestic symptomatic cases and 17 asymptomatic infections since Oct. 1 as more than 20% of people returning from abroad tested positive. Officials warned of lingering risks of local transmission.

The city government said Oct. 26 that Ruili will maintain different levels of control measures among regions based on risk exposure. While parts of the city will continue to be sealed due to high infection risks, people in lower-risk areas may be allowed to travel but are required to take mandatory quarantines in designated facilities at their own cost.

Repeated resurgences underscored the difficulty of curbing the spread of Covid-19 along Ruili’s porous 170 kilometer boundary with Myanmar, where cross-border trade sustains much of the local economy. The situation became even more challenging with the rise of illegal border crossings amid Myanmar’s political turmoil and China’s crackdown on cross-border criminals.

Previous outbreaks were traced to illegal border crossers and criminal suspects who sought to return to China to turn themselves in. According to a Ruili government statement in late September, there were thousands of people waiting to enter China via Ruili, posing great challenges for local disease control.

Prolonged disease control policies have forced people and businesses to suspend daily routines for nearly four months. In the Jiegao district, a special trade zone between China and Myanmar, thousands of people were evacuated from their homes for virus control.

Disruptions and loss of income have burdened many Ruili residents, among whom a large portion are migrant workers. Some chose to leave while others are stuck with heavy spending on self-funded mandatory quarantine and complicated administrative procedures. Those who decided to stay also face a surge of living expenses and continued inconveniences, local people said.

City officials have pledged to provide financial support for people affected and to reduce the impacts of disruption. But several Ruili residents said the policies can hardly benefit all the people in need, and many are still struggling with inconveniences and losses.

Amid a rising public outcry, the Ruili city government issued updated policies Monday to improve supportive measures to ensure the livelihoods of people affected and promised to simplify quarantine procedures to make it easier for people to leave Ruili.

The Jiegao district, China’s first inland border trade zone in southeast Ruili, has been the most strictly controlled area in the city and has remained partially locked down after several flareups since early this year.

With 15,000 residents, Jiegao is linked with downtown Ruili by a bridge that runs across the Ruili River. Since late April, residents of Jiegao have taken regular virus tests every two weeks and must submit the result to leave the area.

Although China has closed the land border with Myanmar in Jiegao for months, people have flooded there seeking entrance. Some of them are suspects who engaged in cross-border criminality such as telecom fraud and sought to return China to turn themselves in. Chinese authorities in June launched a campaign to repatriate overseas criminal suspects.

Jiegao was sealed off between March 29 and May 10 after a flareup, and again continuously since July 4, said a local resident who gave her name as Li Ling.

A more drastic measure came in August when Jiegao ordered all residents to pack up their belongings and leave as the whole area would be evacuated for disease control.

All residents in Jiegao were told to relocate and take a 14-day mandatory quarantine. Although the quarantine was partly funded by the local government, people still had to pay 50 yuan to 180 yuan ($7.80–$28.10) a day for food, according to a Aug. 23 statement published by local authorities.

“Except for medical workers and border officials, all Jiegao residents left by mid-September and moved to other places at their own cost,” said a jewelry store owner in Jiegao.

The store owner said his shop has largely remained closed since late March when virus control measures were ramped up. He shut his business and returned to his hometown in Jiangxi province after a 14-day quarantine.

Li Ling and her family also moved out of Jiegao to downtown Ruili.

The cost of stay

The prolonged lockdown has forced some people to consider leaving Ruili to earn a living, several local residents said. In July and August, a surge of people left the city, according to Wang Wei, a shop owner in Ruili who sent his family out of town.

At the busiest time, about 5,000 people left each day for a week, Wang said, citing a government staffer who handled departure documents for Ruili residents.

Wang himself stayed in Ruili to handle the business, but there were almost no new orders for months. In October, Wang’s landlord wrote off one month’s rent for Wang.

“It merely helped, but (the landlord) is also suffering losses,” Wang said.

Zhang Feng, who runs a curtain shop in Ruili, also decided to stay. Leaving Ruili would mean heavy spending as authorities required a mandatory quarantine for anyone leaving the city. It is a burden for many local people who suffered loss of income for months, according to Zhang.

“Many Ruili people haven’t had income for a long time,” he said. “One of my friends only worked 15 days in April and has since stayed home” for disease control.

Business disruption and outflow of people further cooled the local market while pushing up prices.

“Prices of many daily necessities have soared significantly since the pandemic, and we are now living on our savings,” Li said.

As part of the disease control efforts, Ruili closed most farm markets and large supermarkets, according to Wang. Local residents mainly rely on e-commerce sites for daily purchases with fewer options and higher prices, he said.

In August, the city government issued a set of policies pledging financial support to local businesses including rent reduction and tax deduction. Yi Zhongde, a deputy mayor, said at a briefing Oct. 29 that the city has provided 68.78 million yuan of subsidies to 68,790 people suffering difficulties, in addition to 12 million yuan of allowances to poor families, orphans and disabled people.

But there are more ordinary families and small businesses that are not eligible for the subsidy programs, Zhang said.

“People are going through a very difficult time,” said Ruili Deputy Mayor Yang Mou Oct. 29 while vowing to continue strict controls until the virus is completely cleared from the city.

“As long as there are cases, the risk of virus spread remains,” Yang said. "It is necessary to continue with a strict policy on leaving the city to make sure the virus control situation in the whole province and in the whole country are not affected."