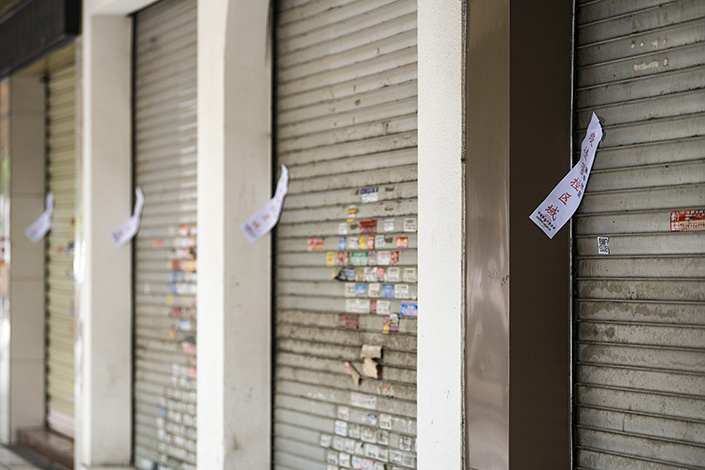 Storefronts have been shuttered on a street in Ruili, Southwest China’s Yunnan province. Photo: VCG

Ruili, a city in Southwest China’s Yunnan province on the border with Myanmar, has been ordered into lockdown after three local infections were confirmed Sunday, marking the third time the city has been locked down due to a Covid-19 flare-up.

The three coronavirus cases were detected in the Jiegao Border Trade Zone during routine mass testing, Ruili Mayor Shang Labian said at a press conference. Of the three, two are Chinese nationals and one is from Myanmar.

Although the source of the infections remains under investigation, people familiar with the matter told Caixin that the latest flare-up is likely associated with the highly transmissible delta variant found in other Covid-19 carriers who came from outside China.

The city of Luzhou in Southwest China’s Sichuan province, which neighbors Yunnan, reported (link in Chinese) Monday that based on positive samples it had received from the Dehong Dai and Jingpo autonomous prefecture, where Ruili is located, five people who admitted to entering Ruili from abroad were found to be infected with the delta variant.

The new cases underscore the difficulty of curbing the spread of Covid-19 along the porous 2,000-kilometer boundary, where cross-border trade sustains much of the local economy.

The latest lockdown marks the third time the border city has imposed strict control measures, a central tenet of China’s anti-Covid playbook, after a resurgence of infections. Outbreaks in Ruili in September and late March forced local authorities to block access in and out of the city, as well as carry out mass testing of its 200,000 residents.

The city’s former Communist Party chief was removed in early April due to “serious negligence” in these outbreaks that infected more than 100 people, including Chinese and Myanmar nationals.

Shang said that after the new infections were reported, local authorities immediately sealed off the residential areas of confirmed cases. They also activated a public health emergency response, closing outbound channels and an online approval service for leaving the city, and kicking off mass testing in certain areas.

Starting Monday, residents are not allowed to enter or leave the city unless they present a negative nucleic acid test result from the preceding three days, authorities said. Residents are also required to show that they’ve been given the all-clear on the local digital health code platform — which gathers location data and displays a warning if a person has visited areas deemed high risk of infection with Covid-19.

On the same day, Ruili reported five coronavirus cases (link in Chinese), all Myanmar nationals, according to Yunnan’s health commission. The neighboring country is in a race against its Covid-19 pandemic. On Monday, Myanmar’s death toll stood at 3,461, as the country reported nearly 3,000 new Covid-19 cases, bringing the total to 168,374, according to data from the World Health Organization.