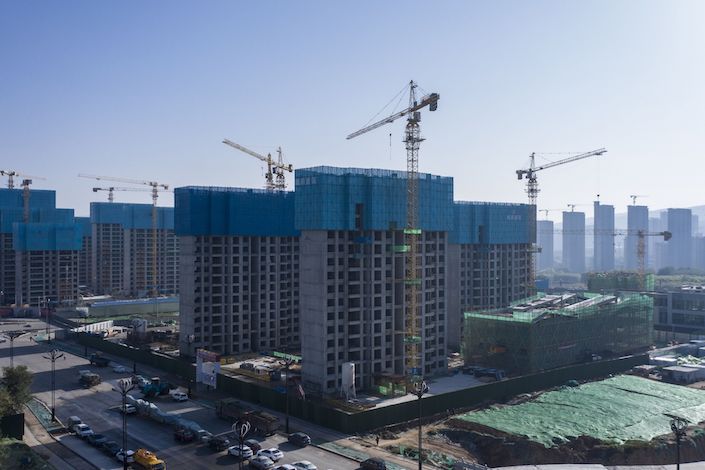 New-home sales by China’s top 100 developers fell 32% from a year earlier in October, according to China Real Estate Information Corp

(Bloomberg) — A sell-off of Chinese developers’ debt is deepening, with one of the 20 biggest property companies joining a host of businesses trying to dodge defaults as debt crises effectively shut them out of the overseas financing market.

China’s high-yield dollar bonds are falling for an eighth straight day Monday after tumbling nearly 9 cents on the dollar in October, closing out the worst two-month slide in a decade. Yuzhou Group Holdings Co.’s bonds due 2025 tumbled 11.6 cents to 38 cents, on pace for its biggest drop in since March, while Sunac China Holdings Ltd.’s note due 2026 fell 5.3 cents to 65.5 cents.

Yango Group Co. has become the latest developer trying to improve its liquidity and avoid default by delaying near-term bond payments. The Shanghai-based builder, which ranked as the 18th biggest in the nation by contracted sales, is seeking to extend three of its dollar notes as “existing internal resources may be insufficient,” according to a stock exchange filing.

The company’s warning of a possible default is intensifying investor concerns that developers are caught in a negative credit loop as refinancing risks prompt businesses to curb spending and reduce sales. Yango shares fell as much as 9% Monday in Shenzhen, hitting a seven-year low. Several of its onshore bonds plunged to record lows, prompting trading halts.

More property enterprises have been scrambling to avoid missing debt deadlines recently as a government clampdown on the real estate sector and a liquidity crisis at giant China Evergrande Group make it tougher for companies to roll over their dollar debt. Other recent examples include Xinyuan Real Estate Co., which last month secured approval on an exchange offer for a bond.

“We will see more of such offers or even defaults in coming weeks and months,” said Eddie Chia, portfolio manager at China Life Franklin.

“Yango is a top developer that had normal operations, albeit slightly more leverage, but clearly it is threatened by a confidence crisis,” he said. “The other developers in the dollar bond market are much smaller than Yango, and most issuers cannot survive if the market is closed.”

Extending payment deadlines is a temporary solution. Some investors are betting that granting reprieves now will allow companies to improve their liquidity when the primary market reopens for China’s riskier borrowers, though it’s unclear when that may happen.

Fitch Ratings said Xinyuan’s default risks remain high, for instance, even after it raised its issuer default rating on the company to CC from restricted default.

Though builders can delay near-term bond repayments, they may still struggle to shore up their financial health as sales slow and profits tumble. New-home sales by China’s top 100 developers fell 32% from a year earlier in October, according to China Real Estate Information Corp., after a similar slump in September.

Rising scrutiny over China’s weakest players also means not all companies will be able to secure bond extensions. Modern Land China Co. failed to repay principal and interest on a $250 million bond late last month after it earlier terminated a proposal to extend the bond’s maturity by three months.

At least four builders defaulted last month as limited access to refinancing channels threatened a wave of delinquencies. Some of China’s worst-performing dollar junk bond borrowers have $2 billion in onshore and offshore bond payments due this month.

This week’s payments due by developers include: