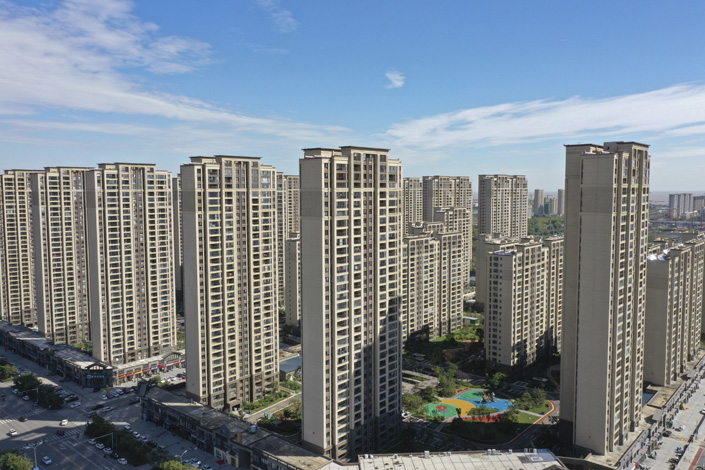 Last month, property sales of the country’s top 100 developers dropped 32.2% year-on-year by value, following a 36.2% slump the previous month, according to a report released by real estate data collector China Real Estate Information Corp. (CRIC) on Sunday. Traditionally, September and October are a high season for property sales, which are a key source of developers’ funding.

Another major funding source has also come under pressure. Eighty out of the 128 property developers listed on the Chinese mainland reported that in the first nine months of the year, their financing activities cost more money than they brought in through the activities, as many saw debt payments outweigh new borrowings. That’s up from 61 for the same period last year, according to figures compiled by data collector Hithink RoyalFlush Information Network Co. Ltd.

The rapid financing contraction is due to tightened rules on lending to the sector, and comes while the fallout of the Evergrande crisis is fueling worries among investors and homebuyers about the industry.

State-owned Greenland said in its latest earnings report that it had cut its interest-bearing debt by 29.6 billion yuan in the third quarter, bringing the total reduction to 64.5 billion yuan in the first nine months, in an effort to meet regulators’ three-red-line rules on developers’ debt ratios.

Greenland is facing uncertainties over its capability to maintain adequate liquidity while using its operating cash flow to bring down its debt to a sustainable level, ratings agency Moody’s Investors Service Inc. wrote in a report last month as it downgraded the company’s credit rating.

On Monday, the developer announced an offer to investors to exchange three outstanding U.S. dollar notes collectively worth $747 million for new notes and some cash in order to ease its liquidity crunch and avoid default.

Some other property firms, however, continued to win fresh funding despite the market turmoil. Poly Developments and Holdings Group Co. Ltd. (600048.SH) reported 25.9 billion yuan in cash flow from financing activities in the first nine months, up from 12.5 billion yuan in the same period last year. Both Greenland and Poly were among the top 10 property firms by sales from January to October, according to the CRIC report.

To bolster waning market confidence, regulators have begun to offer reassurance and asked banks to fine-tune their credit policies toward homebuyers and developers. “Banks have been requested by Beijing to avoid overly severe property curbs. Hence, excessive restrictions have begun to loosen on China’s property sector lending,” economists at Nomura Holdings (Hong Kong) Ltd. wrote in a Monday note.

“We think the fine-tuning is moderate and largely aimed at development loans, which only make up 14% of developers’ total funding,” the economists wrote.

Beijing’s long-term goal of curbing speculation and high leverage will likely not be reversed and “the environment may continue to decline for the property sector, governments’ fiscal conditions, the economy and the financial sector,” they wrote.