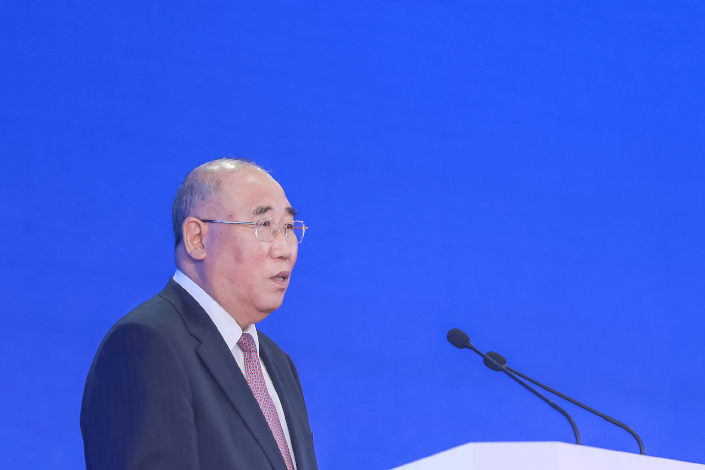 China’s special climate envoy Xie Zhenhua said at a press briefing Tuesday that he expects countries to reach a deal on carbon market rules that fall under Article 6 of the Paris Agreement at the U.N. Climate Change Conference (COP26) in Glasgow.

Xie said that countries have reached political consensus on the issue and the next step is to solve technical problems, according to state media. He also noted the inclusiveness of the Paris Agreement, saying it is important to transform countries’ political will into action.

The top climate negotiator made the remarks as he met reporters on the sidelines of the climate summit, one of the world’s biggest events tasked with tackling global warming, taking place from Oct. 31 to Nov. 12 in Glasgow, the U.K.

Prior to the summit, the Ministry of Ecology and Environment issued a statement noting that China wanted to wrap up negotiations on key issues in implementing the Paris Agreement, especially “core legacy issues” including Article 6, on which global leaders didn’t reach agreement during COP25 in 2019 on rules for the carbon market mechanism to reduce greenhouse gas emissions.

In mid-July, China launched its own national carbon trading market, as the world’s largest greenhouse gas emitter considers an emissions trading scheme (ETS) key to its strategy of transitioning to a low-carbon economy and achieving its climate pledges.

China has submitted its updated plan for reducing emissions, known as Nationally Determined Contributions (NDCs), to the secretariat of the U.N. Framework Convention on Climate Change (UNFCCC) before the COP26 climate summit, reiterating its goals of peaking carbon dioxide emissions by 2030 and becoming carbon neutral by 2060.

Article 6 of the Paris Agreement includes mechanisms that allow the transfer of emission reduction units between countries and the establishment of an international carbon trading market overseen by U.N. agencies.

A deal on carbon market rules will effectively promote global cooperation and help countries with difficulties in reducing emissions to achieve their NDCs, Xiong Xiaoping, deputy director of the climate policy office of the Development Research Center of the State Council, told Caixin.

However, Li Shuo, global climate policy advisor at Greenpeace, noted that if emission reductions are to be used for trading, countries will pay more attention to economic interests when formulating their NDCs, which will not be conducive to the development of more active climate action strategies.

Xie told reporters on Tuesday that each country’s NDCs would be based on their domestic circumstances, with China’s NDCs described as “powerful.” China has made “significant progress” in the field of energy conservation and development of renewable energy resources, he noted.

The country has included renewable energy plans in its NDCs, noting its total installed capacity of wind and solar power will reach more than 1.2 billion kilowatts in 2030, and that the proportion of non-fossil fuels in its primary energy consumption is set to fall to about 25%.

The Paris Agreement has laid out a roadmap that seeks to keep global temperature rises at no more than 1.5 degrees Celsius above pre-industrial levels. Xie said that the goal reflects “the greatest inclusiveness and accessibility” and it would be unrealistic to propose more ambitious targets.

In order to achieve net zero emissions by 2050, developed countries have to take the lead in reducing emissions and providing more support to developing countries, Xie said.

Developed countries pledged to mobilize $100 billion a year to help developing countries with climate financing, but they failed to keep their promise, he noted.

Xiong, however, is not optimistic about the amount of funding that developed countries could provide. He told Caixin that it is still difficult to get developed countries to meet or increase their commitments, amid rising international inflation expectations and economic pressures.