By Wen Simin and Ding Yi 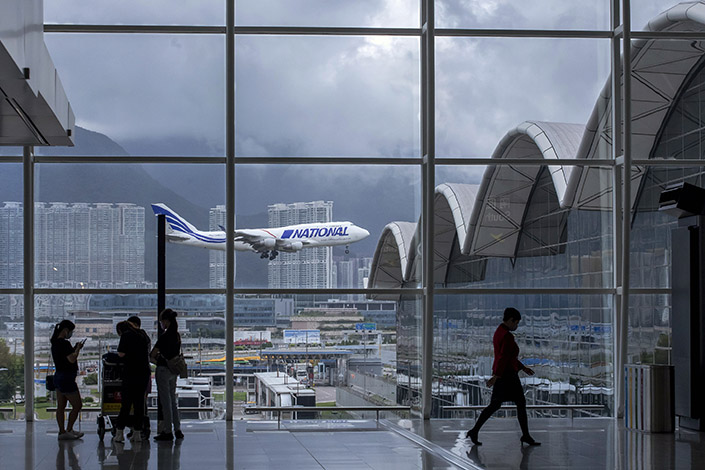 The Hong Kong International Airport (HKIA) is preparing to launch an autonomous bus service, marking the latest step in its use of self-driving technology to enhance efficiency.

Airport Authority Hong Kong (AA), a government agency responsible for operating and developing the HKIA, plans to test out a transport system of autonomous shuttle buses in the third quarter of 2022 in the airport’s restricted area, Steven Yiu, deputy director of service delivery at the AA, said on Tuesday.

If the test goes well, the system will be put into use in 2024 to transport passengers on a route that connects SkyCity, an integrated leisure and entertainment complex situated at the HKIA, with a border-crossing point at the Hong Kong-Zhuhai-Macao Bridge, Yiu said.

The autonomous service is expected to expand to Tung Chung, a tourist attraction located along the northern shore of Hong Kong’s Lantau Island, in 2028, he said.

The AA official did not disclose whether the autonomous buses will have safety drivers onboard and which level of autonomy they will have.

U.S. engineering standards group SAE International classifies autonomous driving from Level 0 to Level 5. Most carmakers and tech firms currently focusing on developing Level 4 technology which refers to features that enable a vehicle to drive itself under most circumstances with no human intervention.

The pilotless bus project marks a renewed effort by the AA to adopt self-driving technology in the daily operation of the HKIA, which in December 2020 unveiled a 10-year “Airport City” development blueprint aimed at enhancing the airport’s capacity and functionality while transforming it into a new landmark and spurring the economic development of Hong Kong and its surrounding regions.

In September, the HKIA introduced its first driverless patrol vehicles to prevent trespassers from entering its restricted areas. Powered by a sensor system made up of eight high-definition cameras and three optical radars, the patrol vehicles can autonomously sound an alarm when detecting people walking within three meters of the restricted area’s perimeter fence, and simultaneously send images to the airport’s security department. The vehicles can operate under a wind speed of 180 kilometers per hour.

The HKIA plans to buy 70 autonomous luggage trailers once the construction of its third runway is completed in 2024, he said.

Caixin has learned that the autonomous patrol vehicles and luggage trailers are developed by five-year-old startup Uisee Technology Beijing Co. Ltd., which is delving into Level 4 self-driving technology for use in different scenarios including at airports and for logistics.

In January, Uisee raised more than 1 billion yuan ($155 million) in a funding round joined by a group of investors including the China Development Bank Manufacturing Transformation and Upgrading Fund.

The HKIA is not the only airport in China to use self-driving technology. In September 2019, the Beijing Daxing International Airport started testing Uisee-developed shuttle buses capable of autonomously planning routes and avoiding obstacles, according to domestic media reports.