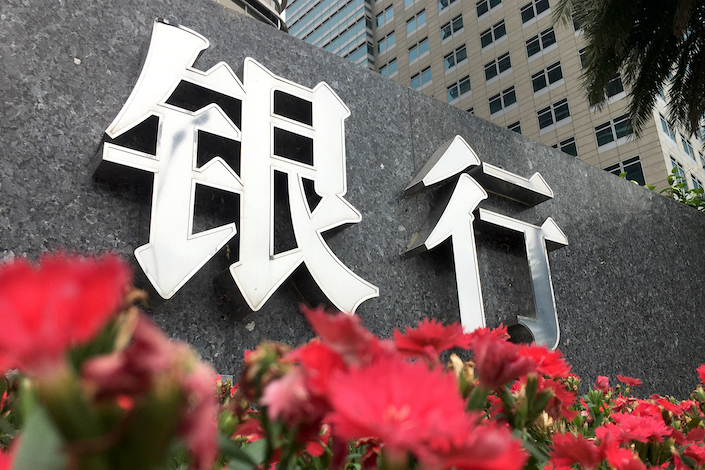 As of the end of September, 337 commercial banks and their WMP units had wealth management product balances totaling $4.37 trillion.

Authorities issued the order in verbal guidance to the banks, the industry insiders said, without offering a reason.

China’s $13 trillion asset-management industry is nearing a year-end deadline for complying with sweeping new rules. Under the overhaul, commercial banks are required to set up separate units to conduct business related to wealth management products (WMPs). Financial institutions that aren’t in position to do so for the time being are supposed to establish special wealth management departments.

As of the end of September, 337 commercial banks and their WMP units had wealth management product balances totaling 27.95 trillion yuan ($4.37 trillion), up 9.3% from a year ago, according to information provider Chinawealth.com.cn.

The China Banking and Insurance Regulatory Commission (CBIRC) has approved 29 wealth management enterprises, of which 21 started operation as of the end of September. Those WMP businesses managed 13.69 trillion yuan of WMPs, nearly triple from a year ago.

Even though WMP companies now manage nearly half of China’s WMPs, only a small number of the country’s more than 4,000 commercial banks have set up WMP units.

When regulators in late 2018 ordered the establishment of WMP units by commercial banks, 73 banks with more than 90% of the WMP market share were eligible to set up WMP units, Caixin learned. At that time, people close to the regulators told Caixin they expected about 50 to be approved by the end of 2020.

Progress has been much slower than expected. Fewer than 30 have been approved, and several that have long been approved haven’t started operations, including the WMP units of Shanghai Pudong Development Bank Co. Ltd., China Minsheng Banking Corp. Ltd. and China Guangfa Bank. Analysts said the delay in opening for business might be related to insufficient rectification and regulatory fines for noncompliance.

A branch of Pudong Development Bank was fined 461.8 million yuan in January 2018 for internal control failures and other rule violations. Minsheng Banking was fined more than 100 million yuan last year, partly over two board members whose qualifications were never approved by the CBIRC. Guangfa Bank was fined 90 million yuan for illegal use of funds in real estate, individual loans and its wealth management business, sources told Caixin.

In the future, small to medium banks might face two paths for their WMP businesses: to sell WMPs for other WMP companies or band together to form WMP joint ventures, several industry participants suggested.

Zhejiang Rural Credit Cooperative Association, which represents a group of small rural lenders in the East China province, told Caixin that none of its members have enough resource to apply for a WMP unit license on their own. One viable option might be for the association to set up a WMP unit to conduct research and development, and the products could be sold by its member lenders, the association said.