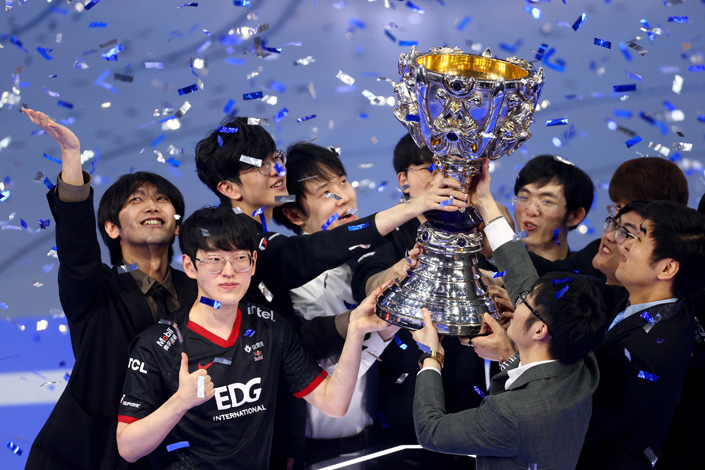 Shanghai-based EDward Gaming (EDG) defeated defending champions Damwon Kia to win the League of Legends World Championship over the weekend, a victory that could spur enthusiasm in China for esports even as Beijing toughens its rules on minors’ gaming habits.

The 3-2 win over their South Korean rivals was unexpected, as EDG — which represented China’s League of Legends Pro League —had never previously advanced past the quarterfinals. Saturday’s win made EDG the third Chinese esports team to win the championship, hosted by U.S. developer Riot Games since 2011, following FunPlus Phoenix in 2019 and Invictus Gaming in 2018.

The five-game finals kicked off at 8 p.m. Beijing time on Saturday in the Icelandic capital of Reykjavik and wrapped up around 1 a.m. on Sunday, with EDG eventually raising the Summoner’s Cup and a cash reward of $489,500, outshining 21 other teams in the month-long tournament.

This year’s finals were broadcast live in China on video streaming platform Bilibili, which in August 2020 inked a three-year agreement with Riot Games that granted it exclusive rights to broadcast major League of Legends’ events in the country, in which game-centric livestreaming platforms Huya and Douyu and microblogging site Sina Weibo also run esports events-related businesses.

The Shanghai-based online streamer declined to release viewership figures for the event, opting instead to release a combined "popularity score" that includes metrics like gift giving. Statistics provided by Esports Charts showed the match had a peak viewership of more than 4 million outside of the country, which was a new record for the tournament.

EDG’s victory thrilled millions of Chinese fans, with Riot Games CEO Nicolo Laurent sharing a clip on Twitter showing thousands gathering on a street at 2 a.m. on Sunday in China to celebrate.

“The response of fans to EDG’s victory is beyond our expectation,” David Ng, co-founder and CEO of EDG’s operator Super Generation Investment, said in an interview with Caixin on Monday.

The win will stimulate the company’s passion to “build EDG into a professional, strictly managed and sustainable esports team,” said Ng, admitting that the company was not yet making huge profits from esports competitions.

While EDG’s win has created buzz in China, it came after the National Press and Publication Administration in August issued new guidelines that limited minors’ gaming time to Fridays, Saturdays and Sundays and public holidays from 8 p.m. to 9 p.m. in order to combat video game addiction.

While acknowledging that Super Generation Investment has stopped recruiting underage players to its professional esports teams given the August rules, Ng said that the core value of the industry is to “enhance the viewership of esports events,” rather than simply attracting children to play games or become professional players.

According to Ng, some companies in the industry are seeking discussions with China’s regulators over the selection and training of underage esports players for the healthy and sustainable development of the industry. He did not provide specifics due to the sensitivity of the issue.

In 2020, the value of China’s esports market reached 147.4 billion yuan, representing a year-on-year increase of 30%, according to statistics from market researcher iResearch.

Esports will make its debut at the 2022 Asia Games in the Chinese city of Hangzhou, with medals being awarded in eight games including FIFA, an Asian Games version of PUBG Mobile, and League of Legends, according to an announcement released in September by the Olympic Council of Asia. Esports was first included as a demonstration sport at the 2018 Asian Games in Jakarta.

A previous version of this story misstated the viewership of the event. Bilibili declined to release viewership figures.