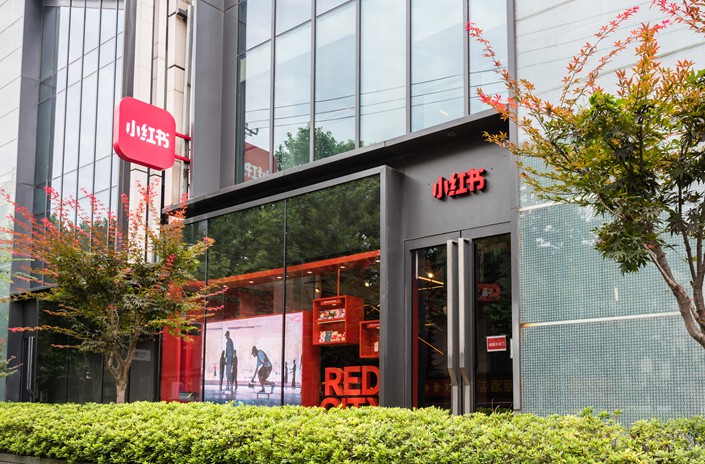 Photo taken on July 3 shows the headquarters of Xiaohongshu in Shanghai. Photo: VCG

Xiaohongshu, a Chinese social media and e-commerce app that resembles Instagram, has been valued at about $18 billion in a funding round that includes the first injection from a Singaporean state-owned investor, Caixin has learned from multiple sources.

The new investment comes as rumors swirl about a potential Hong Kong IPO, after plans to list in the U.S. were scrapped amid a heightened regulatory scrutiny. Authorities’ zealous protection of data security could still prove a hurdle to a debut in the Chinese territory.

Officially, the firm has made no comment on the listing plan, with a spokesperson telling Caixin only that Xiaohongshu was in “regular communication with financial stakeholders.”

“We do not have any specific IPO plans at the moment,” the person said.

Xiaohongshu declined to comment on either the funding or the valuation, and reports of the figures have varied. One source with knowledge of the matter put the fundraising figure for the most recent round, which closed last month, at $500 million.

“This round of financing is mainly based on existing shareholders increasing their stakes in the company,” a spokesperson told Caixin, referring to investment from Tencent Holdings Ltd., Alibaba Group Holding Ltd., Tiantu Capital and Genesis Capital.

The last round is understood to represent the first investment in Xiaohongshu by Temasek Holdings Ltd., which manages an investment fund on behalf of the Singaporean government.

Xiaohongshu’s last known funding round was in June 2018, when it raised around $300 million with a valuation of more than $3 billion. Investors included Tencent, GSR Ventures, GGV Capital, Tiantu Capital and Genesis Capital.

Founded in 2013, Xiaohongshu focuses on lifestyle and beauty content in livestreaming, short video, photo and text formats, targeting affluent young women. Users can buy products directly through the platform. In June, it had an average of 63.67 million daily active users, an increase of 127% from last year, while monthly active users more than doubled to 239 million in the month, according to figures from Aurora Mobile cited by Citic Securities.

Xiaohongshu had previously met investors and was mulling an initial public offering in the U.S., Caixin has learned. In March, the firm appointed Yang Ruo, a former managing director at Citigroup, as its new chief financial officer. Caixin understands that Yang was to take charge of any proposed listing. But the plans were halted after Chinese cyberspace authorities launched a national security investigation into ride-hailing firm Didi Chuxing after its own U.S. listing.

Last month, rumors surfaced that Xiaohongshu will instead seek a listing in Hong Kong. According to a Bloomberg report, the company was working with advisers and could file an application for an IPO that could raise as much as $1 billion as soon as this year.

An investor told Caixin that the option to list in Hong Kong remains open, but Xiaohongshu would still have to face a data security review, and investors are still concerned about regulators’ sentiment.

Among the new rules revealed in July for firms seeking a listing outside the Chinese mainland, any Chinese company that holds the personal data of 1 million or more users would have to seek a government cybersecurity review.

The draft measures said the cybersecurity review would focus on assessing national security risks that may arise from procurement, data processing and “overseas listings,” including the risk of core data or a large amount of personal information “being stolen, leaked, destroyed, or illegally used or exported.”

Also under the microscope would be the risk of critical information infrastructure, core data or a large amount of personal information “being influenced, controlled or maliciously used by foreign governments” in the wake of a Chinese company’s overseas listing.

Last week, in its first rectification notice since the new Personal Information Protection Law came into effect, Xiaohongshu was among 38 apps named by the Ministry of Industry and Information Technology for misdeeds such as excessively collecting users’ data or publishing misleading information.