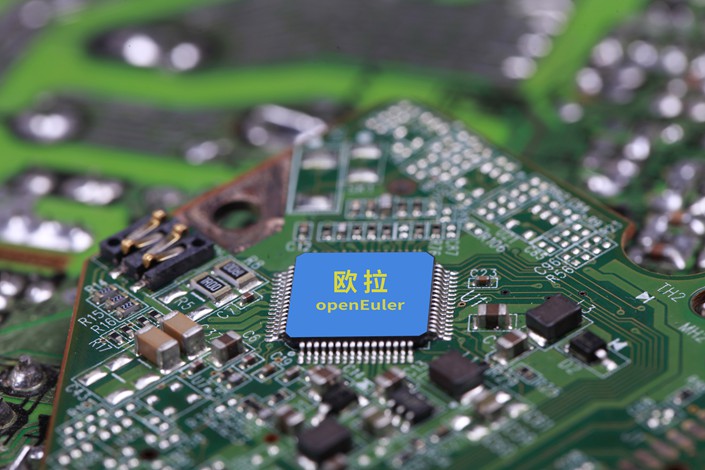 Derived from a server operating system, openEuler OS was made open-source by Huawei in 2019 for digital infrastructure platforms. Photo: VCG

Huawei Technologies Co. Ltd. has donated its homegrown open-source operating system (OS) to a non-profit social organization it co-founded last year, with the goal of increasing the OS’s take-up by encouraging external software developers to use it in their products.

The source code of openEuler along with related assets such as verified software packages, trademarks and community infrastructure were handed over to the OpenAtom Foundation, a non-governmental organization. OpenAtom was set up by tech giants including Alibaba Group Holding Ltd., Tencent Holdings Ltd. and Baidu Inc., as well as Huawei itself, in September 2020.

Speaking at a Tuesday industry summit where the donation was announced, Deng Taihua, president of Huawei’s computing product line, told reporters that the move aims to encourage open-source software developers from various industries to “better contribute to the construction of the openEuler OS ecosystem.”

Facing U.S. sanctions that cut off access to core components and software made with U.S. technologies, Huawei unveiled Harmony OS in 2019 to replace Google’s Android OS in a wide range of connected devices including mobile phones, home appliances, autos and even drones.

In October, the Shenzhen-based giant said that Harmony OS has come to power more than 150 million devices from smartphones to tablets and smart speakers, as it set its sight on increasing the number to 200 million by the end of this year.

Deng also said that Huawei aims to bring openEuler OS, which has attracted nearly 10,000 developers since becoming open-source, to the global stage starting 2022, a goal that comes at a time when many Chinese enterprises are doubling down on building their own software ecosystems to challenge the dominance of closed-source Apple iOS and open-source Android OS.

Derived from a server operating system, openEuler OS was made open-source by Huawei in 2019 for digital infrastructure platforms, including servers and platforms of cloud computing and edge computing.

Besides openEuler OS, Huawei donated all Harmony OS’s foundation framework to the OpenAtom Foundation in 2020 and 2021, to encourage more open-source software developers to freely use, improve and redistribute the underlying source code for their own products.

On Nov. 4, OpenAnolis, a one-year-old community for open-source operating system developers, said (link in Chinese) that it will donate the open-source server operating system Anolis OS to the OpenAtom Foundation. The system is jointly developed by 15 companies including Alibaba’s cloud division.

So far, the OpenAtom Foundation, which is supervised by the Ministry of Industry and Information Technology, has received different types of operating systems as donations, including Tencent OS Tiny designed for Internet of Things (IoT) devices and Alibaba’s IoT operating system AliOS Things.