In Depth: The Tycoon With a Passion for Tackling Climate Change 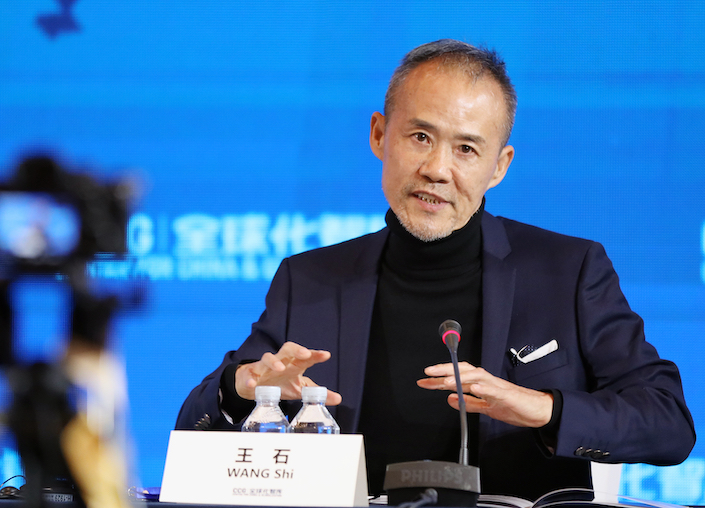 Wang Shi speaks at the China and Globalization Forum in November 2020.

Wang said he knew clearly why he came and what he wanted to achieve. He said he was determined in 2019 to set up a China Corporate Pavilion at the next summit. The hosting U.K. government decided to conduct the conference in person only one month in advance.

The opening event of the China Corporate Pavilion at the COP26 Nov. 2 was attended by former U.S. Vice President Al Gore, one of the world's most prominent climate activists; China Special Envoy for Climate Change Xie Zhenhua; and China’s Vice Minister of Ecology and Environment Zhao Yingmin.

Wang said there was more hope than pessimism in Glasgow this year. He recalled that his first sight stepping off a train in Copenhagen in 2009 was huge posters displaying world leaders’ pictures, only aged by 10 years. The posters had them saying, “I’m sorry, we could have stopped catastrophic climate change … we didn’t.”

Wang said expectations for the Glasgow summit were low. Not much significant progress has been made since the Paris Agreement was signed in 2015. For example, the situation in Brazil’s rain forests has worsened rather than improved, he said. But he said he still feels optimistic.

“Compared with the previous pessimistic mood, now there’s a sense of urgency and the need to take action, but there is more hope than wait-and-see or disappointment,” Wang said.

Wang participated in a number of small sessions, which he said were more practical and meaningful than the main conference. The discussions show that the world is curious about China’s determination to reduce emissions, Wang said.

In the COP26 summit’s first major deal, more than 100 world leaders promised to end and reverse deforestation by 2030.

“They would ask me, ‘What is China’s attitude on this issue?’ I said, ‘I’m very happy that this is signed,’” Wang said.

China in line with the world

China started a “returning farmland to forest” program in 1999. During the 2010 Shanghai World Expo, Vanke’s pavilion showed a promotional video on the achievements made under the program over 10 years.

“Now another 10 years have passed,” Wang said. “If you go to the northwest of China, the barren mountains are now green.”

“Chinese entrepreneurs’ awareness of climate change is keeping pace with the world,” Wang said in his speech at the opening ceremony of the China Corporate Pavilion.

He cited the textile industry. Although the sector is normally considered a heavy polluter, China’s textile industry is in line with global peers on the environmental, Wang said.

The U.N. climate summit also played an important role in changing the mindset of Chinese entrepreneurs. Wang recalled that Sun Ruizhe, president of the textile council, was invited to 2015 Paris climate summit. Immediately after he returned to China, he started to promote corporate social responsibility in the industry.

Another example is China’s smelting industry, a major carbon emitter. Wang said when he visited Delong Steel Ltd. in Hebei province, he noticed there was no white smoke coming out of the steel mill’s chimneys. He was told the steelmaker captured its carbon dioxide emissions. As one of the first batch of green factories in China, Delong has even transferred its factory into a tourist attraction and education center for environment protection.

Many Chinese entrepreneurs or successors of family businesses are educated in the West and have adopted international awareness on innovation and environmental protection, Wang said.

Wang said he hoped more Chinese companies would come to the China Corporate Pavilion at next year’s climate summit.

In the real estate industry, Vanke is focusing more on carbon-neutral renovation of existing projects through integrated energy solutions that improve efficiency, increase the proportion of green energy and, most importantly, change people’s lifestyles, Wang said.

Buildings and construction account for 39% of energy-related carbon dioxide emissions, and the energy intensity per square meter of buildings needs to improve 30% by 2030 to meet the goals of the Paris Agreement, according to a report published in 2017 by the International Energy Agency.

Wang said the target will not be difficult to meet. New technologies can reduce energy consumption in buildings, and renovation costs can be recovered after a certain number of years. There are companies in China that specialize in this kind of business. People’s housing renovation costs will be funded by future energy savings, Wang said.

There is huge potential for low-carbon businesses, including building energy conservation, solar photovoltaic, geothermal energy, energy storage and charging piles, but the problem is that many equipment manufacturers are acting alone, Wang said.

“What I want to do is integrate these individual businesses and build an urban community carbon balance platform,” he said. He aims to expand the business globally, he said.

“Harmony between man and nature is part of Chinese culture,” Wang said. “This is my message to the West. I think they will understand.”