By Du Caicai and Wang Xintong 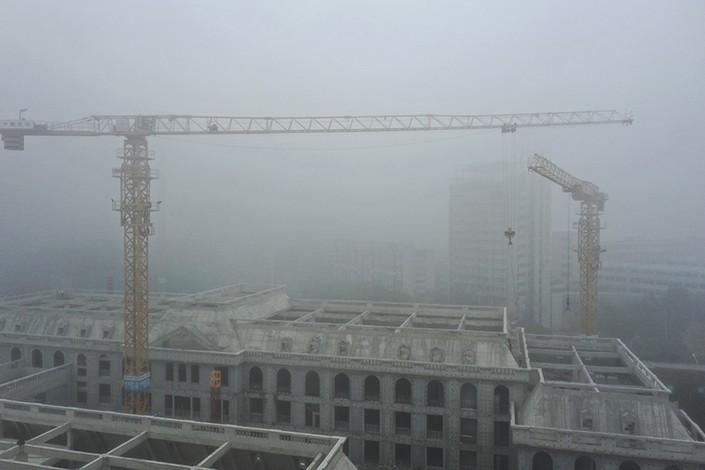 Work gets suspended at a construction site in the northern city of Tianjin on Wednesday due to heavy fog. Photo: VCG

And this was not the end of the tragedies, with Hurricane Ida triggering floods and tornadoes in the northeastern U.S. in September, breaking rainfall records at several areas and killing nearly 100.

Climate-related disasters are hitting the world five times more frequently than in the 1970s, according to an August report by the World Meteorological Organization. China, a climate-sensitive nation, was among the hardest hit by extreme weather events in the past 20 years, according to the Global Climate Risk Index 2021 published by the environmental think tank Germanwatch.

Although many countries like China are on track to reduce greenhouse gas emissions to tackle global warming, their efforts to adapt to climate change are lagging behind. According to a report published in January by the United Nations Environment Programme, about three-quarters of countries have put climate adaptation plans in place, but don’t yet have the financing and implementation capacity they need.

In 2015, the Chinese government launched a multibillion-dollar “sponge city” program to tackle worsening floods. But the building and improving of flood-control infrastructure fell short as toothless red alerts went unheeded ahead of pilot city Zhengzhou’s flooding in July.

On Oct. 31, the COP26 United Nations climate summit — one of the biggest events in the world for tackling global warming — kicked off in Glasgow, the U.K. On the sidelines of the ongoing summit, China’s top climate negotiator Xie Zhenhua urged developed countries to deliver on their promise to mobilize $100 billion a year in climate finance to help poorer countries fight climate change and adapt to its impacts, including by building climate resilient infrastructure.

Insufficient funding for pilot programs and the lack of a scientific system to assess adaptation results are two of the main reasons for China’s slow progress in adapting to climate change.

The country released its National Strategy for Climate Change Adaptation in 2013 and selected 28 cities across 18 provinces to pilot adaptation measures in 2017.

However, as most of these cities are less economically developed and none of them have special national funds to support them, it’s a stretch to fully implement the adaptation programs, according to the National Center for Climate Change Strategy and International Cooperation.

An expert told Caixin that China’s fiscal budget hasn’t included measures for climate adaption. Although the government has allocated some funding for flood control and drought relief, it is not enough in a changing climate.

At the same time, the complexity of climate adaptation itself has added difficulties to adaptation efforts.

“One of the biggest issues left over from the 2013 national strategy is the evaluation of adaptation effects,” said Xu Yinlong, a researcher at the Chinese Academy of Agricultural Sciences, who added that most of the current evaluation indicators are not pertinent for specific measures.

Without a complete set of evaluation systems, it’s difficult to know to what extent cities have adapted to climate change and what to improve next, said Miao Xilin, an official from the Jinan Municipal Ecology and Environment Bureau who has been responsible for local climate-related work for many years.

Xu said cities can set adaptation targets tailored for their own needs after building a scientific understanding of the overall trend of climate risk in the future.

Citing the example of high temperatures and flooding that some cities could suffer, Xu suggested the cities make it clear how high a temperature and how extensive a flood they can bear. Thus, even if the actual risk exceeds these limits, the cities that have been mentally prepared could try to reduce the loss of life and property by formulating emergency plans and other measures, he said.

For cities that don’t have a clear adaptation plan due to the uncertainty of future climate risks, they can refer to recent local extreme weather events to imagine what they would do if such events were to happen again, he noted.

China has experienced increasingly extreme weather such as heavy rainfall over the past few decades, according to a government report published in August. The country has suffered heavy economic losses from flooding as many of its regions are prone to the problem.

The government has taken action to help cities adapt to the impact of flooding, including launching a national pilot program to build the so-called “sponge cities.”

“It can be said that sponge cities are the real achievements in the work related to climate adaptation,” Miao said.

Chinese authorities proposed the idea of “sponge cities” in 2013, hoping that by absorbing rain, cities could respond flexibility to environmental changes and adapt better to rain-triggered natural disasters.

Authorities said the construction of such cities aimed to solve a range of problems, including urban drainage, water environment improvement and water resource utilization.

In 2015 and 2016, the country selected 30 cities to participate in its “sponge cities” program, which aimed to minimize the impact of urban development and construction on the environment as well as to retain and recycle as much as 70% of the cities’ rainfall, according to guidelines issued by the State Council, China’s cabinet.

One of the successful examples of the pilot program is Jinan, the capital of East China’s Shandong province. The city, home to more than 800 springs including the well-known Baotu Spring, set two goals when applying for the program: reducing water pollution and better managing springs that are drying up.

Over the past few years, the water level at the Baotu Spring has risen by 3 to 5 centimeters, although the pilot area in Jinan was only 39 square kilometers (15 square miles), said Tian Rong, an official at the Jinan Housing and Urban-Rural Development Bureau. The spring had once dried up for more than two years, state media reported.

The construction of “sponge cities” has played a significant role in refilling the groundwater, Tian added.

The program also aims to improve urban drainage efficiency by increasing the control rate of the annual runoff in the cities’ total watershed to over 70%.

Liu Xiang, a professor at the School of Environment of Tsinghua University, told Caixin that the 70% criterion means the daily precipitation that a sponge city can cope with is about 25 to 30 millimeters, a common rainfall intensity in most of China’s cities.

The pilot campaign has helped China accumulate “rich experience” in climate adaptation, though it has also caused problems, Liu said.

Liu said some places built many reservoirs in an effort to realize their rainwater storage goal, leading to increasing investment in building infrastructure like roads, bridges and railways. However, not all of the construction projects are reasonable and appropriate, giving people a feeling of “over-engineering,” while the expected effects haven’t been achieved.

At the same time, these pilot cities are designed to handle light rain that falls regularly, but they have trouble coping with shorter, heavy downpours that tend to occur less frequently, Tian said.

In the wake of Zhengzhou’s severe flooding in July, China’s “sponge cities” program was mocked by many Chinese social media users. The city may have invested 53.5 billion yuan ($8.3 billion) in flood-control infrastructure based on its 2018 plan.

The program has an overall consideration in dealing with extreme rainfall events, Liu said. Based on its design standard, a sponge city can effectively handle light to moderate rain, and can also work with drainage pipelines, natural bonds and its urban water system to “safely” absorb rainwater during heavy downpours, he said.

Those rainstorms still need to be solved by the city’s large drainage system, including pipe networks and river channels, Tian said.

China has been working to improve its drainage system in the past few decades, with an improved design standard that allows a city to tackle heavy rain that falls only once in up to five years. However, this standard is still lower than some international standards. Tokyo’s drainage system can handle the kind of rainfall that’s usually only seen once a decade, while New York can deal with once-in-15-year downpours.

China has put huge investment into rebuilding its underground drainage network, but the country is still facing difficulties in pushing the work forward due to limited underground space.

Cheng Xiaotao, member of China’s national committee on disaster reduction, told Caixin that after many years of economic development, a large number of pipelines have been built underground, leaving less available space.

Even though some old urban areas have plans to improve their drainage standards, carrying out plans is hard because of the lack of underground space for pipeline expansion, Cheng said, adding that new urban areas should prioritize their pipeline reconstruction projects on the ground.

Given the situation, the State Council in April issued a document calling for better management of urban drainage in multiple aspects including source control and pipe network reconstruction.

According to the document, cities should establish their urban waterlogging prevention systems tailored to local conditions by 2025, under which water emissions will be reduced at source and through pipe networks. The document also requires cities to take emergency action if water levels exceed standards.

Although it is possible for China to achieve its targets before the deadline due to its current economic strength and engineering capabilities, “the task remains arduous,” Liu said.

Risk identification requires authorities to identify the types of disasters and their high-risk areas in advance and consider the scenarios of the most likely and most adverse events in their pre-arranged plans.

He also suggested authorities develop hazard perception, saying that only when they realize when a danger is approaching and how big it is, can they take effective emergency measures.

Cheng said the clearer the awareness of danger, the easier it will be to allocate resources. He pointed out “a resilient city is not one that cannot be flooded, but one that’s not afraid of flooding.”