By Wang Xintong and Du Caicai 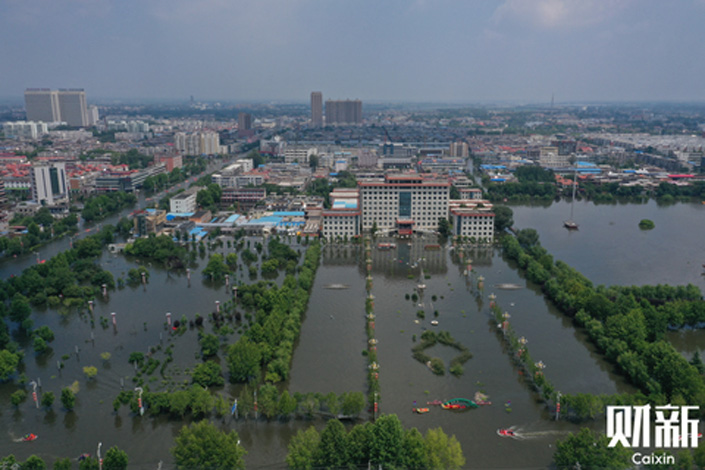 China has been increasingly impacted by risks from climate change as the country, which is the world’s biggest emitter of greenhouse gases, has experienced increasingly extreme weather including high temperatures and heavy rainfall over the past few decades, according to a government report.

China is in a “sensitive area” that has been significantly affected by global climate change, as the rate at which its temperatures have risen are clearly higher than the global average, said Chao Qingchen, deputy director of the National Climate Center, at the release of the Blue Book on Climate Change in China (link in Chinese) on Wednesday.

China’s annual average surface temperature grew significantly from 1951 to 2020, rising at a rate of 0.26 degrees Celsius every 10 years, said the report, with the past 20 years the warmest period in China since the beginning of the 20th century.

That is 73% higher than the global average of 0.15 degrees Celsius every decade over the same period, according to Chao.

The average concentrations of major greenhouse gases that contribute to global warming, such as carbon dioxide and methane, hit records last year, according to the report, which was released just weeks after devastating floods battered central Henan province killing more than 300 people and causing billions of dollars in losses.

The staggering pace of economic growth in recent decades has seen China’s carbon emissions soar. In 2019, it contributed almost 30% of total global emissions, according to a May report by the Rhodium Group. That year for the first time, China surpassed the emissions of all developed countries combined, said the report.

The central government has acknowledged the problem and is accelerating efforts to tackle climate change as it aims to peak its carbon emissions by 2030 and achieve carbon neutrality, or net-zero carbon emissions, by 2060.

According to the report, 2020 was one of the three warmest years on record as the global average temperature was 1.2 degrees Celsius higher than the level recorded from 1850 to 1900.

Although China’s average annual precipitation rose steadily between 1961 and 2020, the differences between regions were clear. The report noted regions south of the Yangtze River, Asia’s longest river, and the central and northern parts of the Qinghai-Tibet Plateau, China’s largest plateau, experienced more heavy downpours.

The risks from climate change have spread to the socio-economic system from the natural environment, Chao said, warning that the continuously rising temperatures and intensified extreme weather events pose a major threat to both ecological and socio-economic development.