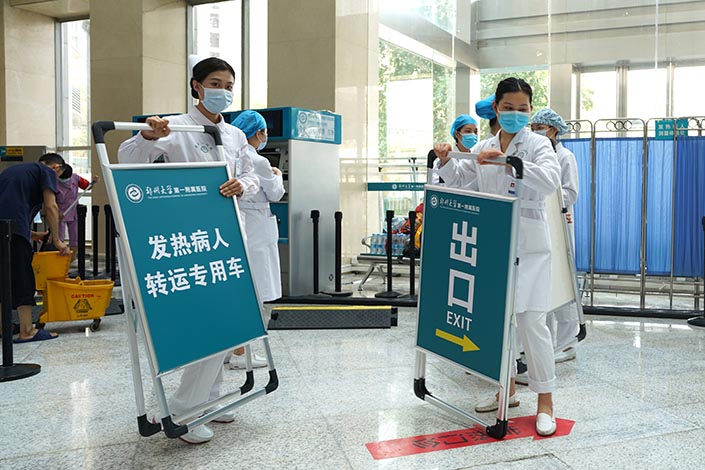 The staff of the First Affiliated Hospital of Zhengzhou University prepare for the hospital's reopening in Zhengzhou, Central China's Henan province, on Sunday. Photo: VCG.

A power outage in the First Affiliated Hospital of Zhengzhou University, the city’s largest medical institution, caused more than 11,000 patients to be evacuated or transferred to other hospitals, and medical workers had to use manual ventilators to help some patients breathe.

Several other hospitals in Zhengzhou experienced water and power cuts from July 20 when the record heavy downpour hit the Henan capital.

The First Affiliated Hospital’s director, Liu Zhangsuo, told Caixin that its direct economic losses as a result of the heavy rainfall exceed more than 1 billion yuan ($153.7 million). It resumed outpatient services on Monday, despite power not yet being fully restored.

The devastating flooding in Zhengzhou highlighted the vulnerability of local hospitals’ emergency systems.

Cai Guanghui, an expert from the Institute of Asclepius Hospital Management, said most hospitals in recent years focused on how they could quickly respond to medical safety risks, but they paid far less attention to other aspects, such as flood emergency management.

Historic rainfall of more than 200 millimeters fell in just one hour in Zhengzhou on the afternoon of July 20. A medical worker at the First Affiliated Hospital of Zhengzhou University told Caixin that water burst into the hospital around 4:30 p.m. and reached thigh height only an hour later.

As the power went out, patients in the hospital included pregnant women and others who needed surgeries, the worker said. The hospital started transferring patients out of the premises around 2 a.m. on July 21, but only 83 could get out early that morning as most of the ambulances were flooded and could not be used, the worker said.

The hospital took 30 hours to transfer and evacuate 11,050 patients, Liu said, of whom 600 were critically ill.

According to the official People’s Daily newspaper, the hospital’s emergency power was also down, and the elevators stopped working due to flooding. A large number of medical testing and power equipment items located on all three of the hospital’s basement floors were also flooded, a physician told Caixin.

Prior to the heavy rainfall, local authorities had held a meeting at which some hospitals were warned to prepare for flooding, said a medical worker at Henan Provincial People’s Hospital, located in Zhengzhou. However, it is unclear whether a representative of the First Affiliated Hospital of Zhengzhou University attended the meeting.

Caixin has learned that hospitals normally formulate plans for different emergencies. However, these plans are more aimed at preventing incidents such as fires and infections from causing severe damage, rather than mitigating natural disasters such as rainstorms and flooding.

Industry insiders told Caixin that logistics support departments responsible for disaster prevention and control in hospitals have long been neglected, and their management abilities are relatively weak.

The main leaders of hospitals are not often promoted from these departments, so they lack knowledge about how to cope with disaster events, a person familiar with the matter said. At the same time, some hospitals employ inexperienced technical personnel to maintain the basic operations of water, electricity and gas, raising questions over their capacity to handle major incidents, the person said.

It is worthwhile to invest in preparation work as long as it makes sense when an incident occurs, Cai said, citing the example of Taizhou Hospital which maintained normal operations when super typhoon Lichma landed in the Zhejiang province city in 2019 and caused widespead power outages.