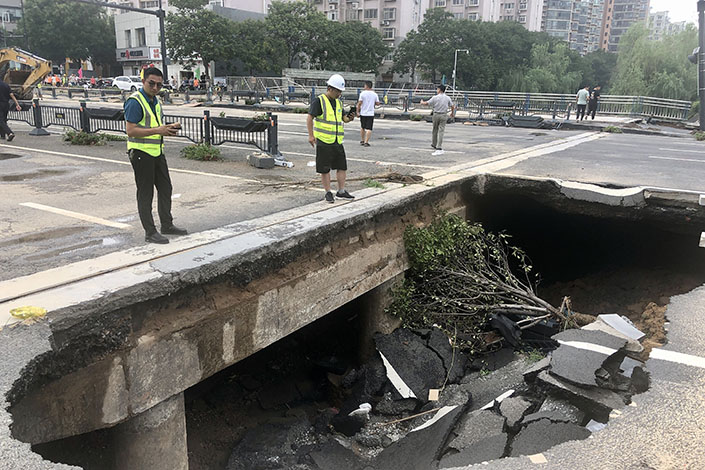 A collapsed pavement in Zhengzhou on Thursday. Photo: VCG.

As of noon Friday, 51 people had died amid the flooding in Zhengzhou, the capital of Henan province, according to state media. For the whole province, the official death toll has risen to 56, with five still missing, the state-run Xinhua News Agency reported this evening. In Zhengzhou, a dozen travelers died in the paralyzed subway system Tuesday.

The hardest-hit city received more than 200 millimeters (nearly 8 inches) of rain in just one hour on Tuesday. In comparison, the record rainstorm that recently hit the German city of Cologne caused 154 millimeters of rain in 24 hours, around 30% that of Zhengzhou. The European country recorded a death toll of over 200 amid the widespread flooding, local media outlet Deutsche Welle reported Thursday.

Many parts of Zhengzhou, including hospitals and residential areas, have experienced water and power cuts as a result of heavy rain, and many residents had difficulty accessing the internet, raising questions about the capacity of the city’s infrastructure to cope with such extreme weather.

The “sponge cities” are part of a national program launched in 2014 with the goal of retaining and recycling as much as 70% of the chosen cities’ rainfall. Zhengzhou, located on the banks of the Yellow River, was chosen (link in Chinese) to be part of the program in 2016, and has been working to improve its flood-control infrastructure.

An official from the Zhengzhou planning bureau was quoted by Dahe Daily, a state-owned local newspaper, as saying that the program will help the city improve its ability to handle extreme weather events.

Many social media users have attributed the severe flooding to problems in the sponge city program, the official China News Weekly reported. However, Huang Rongru, a professor of hydraulic engineering at the South China University of Technology, was cited by the magazine as saying that people have “great prejudice” against the sponge cities program.

This program alone cannot deal with all urban rainstorms, and only a unified system including subsystems such as runoff controls and storm sewers can solve problems such as waterlogging, Huang said.

As there’s no unified management and construction and maintenance standards for Zhengzhou’s drainage facilities, these facilities can’t work well during rainy season, leading to flooding, Yang Qing, who works at the city’s engineering management office, said in another Dahe Daily report.