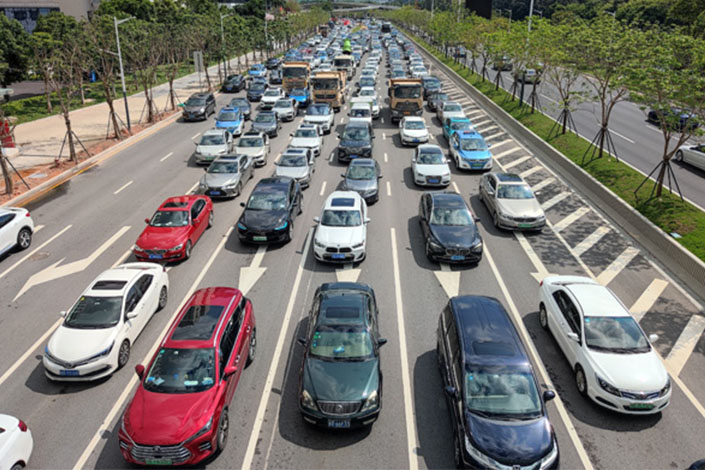 Traffic on a road in Shenzhen on June 3. Photo: VCG

Guangzhou plans to issue 80,000 license plates for hybrid electric vehicles (HEVs) between next month and December 2022, compared with 50,775 in the first eleven months of this year and 25,913 in 2020, according to a document issued on Tuesday by the Guangdong government.

HEVs are vehicles that combine a gas or diesel engine with one or more electric motors which can be powered by energy stored in batteries.

In 2012, Guangzhou began to limit the purchase of new vehicles as a way of easing traffic congestion and air pollution, allowing residents to obtain permission to buy gasoline-powered vehicles through either a lottery system or public auctions, with a fixed annual quota of about 100,000 license plates. Winners of the lottery are announced once a month.

The announcement does not change the allocation for cars powered solely by fossil fuels.

Since the beginning of 2021, the Guangzhou government has been taking measures to boost auto sales as part of efforts to spur GDP growth amid the Covid-19 pandemic.

In April, the city’s transportation bureau unveiled plans to add 30,000 license plates for HEVs sold to individual buyers, which it said would be allocated evenly from April to December. The move had an immediate effect, with 56.2% of applicants receiving a license plate in April, up from 15.8% in March.

Meanwhile in Shenzhen, where a similar license plate quota has been in effect since 2014, Tuesday’s document indicated the city will scrap rules that exclude people who have not paid social insurance in the city for at least 24 months from buying pure electric or government-verified plug-in hybrid electric vehicles without participating in a lottery. No timeline was given for the change.

Tuesday’s document is expected to fuel demand for new-energy vehicles among internal migrants who do not pay social insurance in the city.

The announcement also lists measures which will be taken to accelerate consumption in the catering, fashion and tourism industries.

Apart from unveiling the plans to partially ease new vehicle ownership restrictions in Guangzhou and Shenzhen, the document also called for Guangdong’s city governments to help carmakers improve their auto sales networks in both urban and rural areas.

In the first nine months of 2021, auto sales in Guangdong province totaled 2.3 million units, up 7.3% year-on-year, of which 288,300 were new-energy vehicles, representing a year-on-year increase of 116.8%, according to statistics provided earlier this month by the Guangdong Automobile Industry Association.

The document comes as the State Development and Reform Commission and the Ministry of Industry and Information Technology have repeatedly encouraged relevant cities to increase their new vehicle license plate quotas or phase out their purchase restrictions to boost car consumption in recent years.

This year, Beijing revised its decade-long policy to allow members of a family, including spouses, parents and children, to file a joint application to enter the new vehicle license plate lottery system if no one else in the family owns a car, with a purpose of increasing their chance of winning the lottery. The policy change came after complaints from many citizens that they had been waiting in the lottery pool for many years.