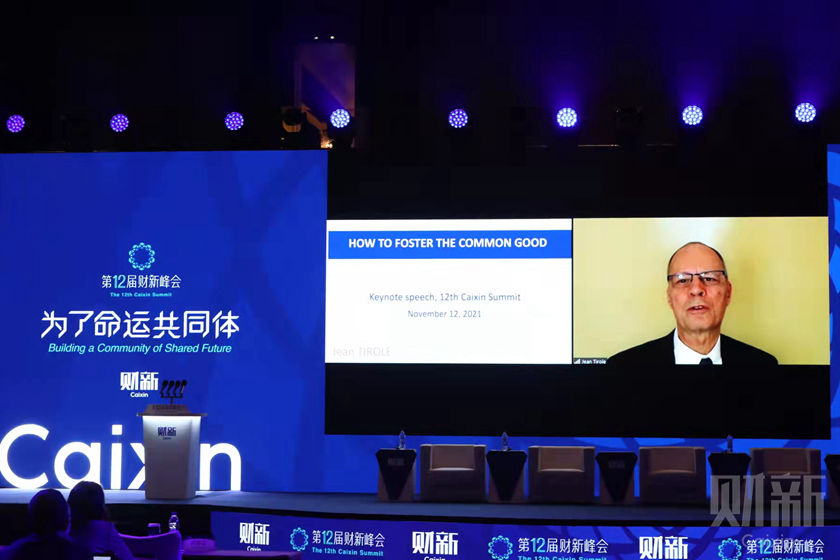 When the interests of individuals, businesses, and governments are misaligned with the common good of society, incentives and persuasion are both needed to achieve shared interest, Jean Tirole, a French economist and Nobel Prize winner, told the audience at this year’s Caixin Summit on Friday.

Tirole won the Nobel Prize in Economic Sciences in 2014 “for his analysis of market power and regulation,” according to the Nobel Prize website. He believes that a market dominated by a few companies without regulations can drive up the prices and bar the entrance of new companies. His work is focused on developing frameworks to regulate different industries.

Speaking remotely on the first day of the two-day economic and financial conference, Tirole explained the meaning of the common good through a thought experiment. “Imagine that you are not born yet, so you don’t know whether you’ll be a man or a woman, a Han or an ethnic minority, born in a rich family or a poor family, or if you are French or Chinese, or what kind of education you will get, what kind of genes you will get… And ask yourself a very simple question: what kind of society would I like to live in? And the answer to this question is going to define the common good.”

A society where the common good is achieved will adopt an efficiency-oriented legal framework, fight against monopolies, ensure people’s health, provide opportunities for education, curb different forms of inequalities, and tolerate differences, he said.

To persuade different people and organizations to act in the interests of the public, the government can encourage good behaviors in citizens and corporations, and raise the awareness of the consequences of selfishness, Tirole said. But persuasion alone may have limited effects, as in the case of global warming, where very little has been done despite decades of discussions. So incentives are also needed to achieve the common good.

In his address, Tirole cited British economist and Nobel Prize winner Ronald Coase’s ideas on contracts. Coase was a believer that the market can use contracts to sort out conflicts between the business shareholders and the stakeholders such as workers and communities. Business shareholders are decision-makers, whose choices affect their employees and the community. The contracts set the terms for areas including wages, debt repayments, as well as insulate stakeholders from the decision-making process.

But Coase’s theory is flawed, Tirole said, pointing to the limitations of contracts, which can be imperfect and aren’t suited for global-scale issues.

According to another school of thought highlighted, while the market is the invisible hand for efficiency, the government should step in where contracts fail to protect the interests of the stakeholders.

When the government fails to address the problems standing in the way of the common good, corporations should take up responsibilities, Tirole said.

He added that there are three views on how businesses can take up social responsibility. First, they can take a long-term perspective and maximize their profits by protecting the environment, their workers and other stakeholders. Second, they can incorporate the interests of stakeholders into their products, such as sourcing fair trade raw materials and operating green projects. Third, corporations can also directly engage in philanthropy at the costs of their benefits.

Regarding environmental, social and corporate governance (ESG) initiatives, Tirole said it’s hard to design relevant criteria. It requires collecting data along the supply chain and aggregating the data, which makes it complex to evaluate a company because it may simultaneously engage in ethical and unethical practices. It’s also hard for investors to know if their investments are good and the degree to which it is ethical. For example, green investments may not always make a difference if the green project has already been subsidized by the government and would still be green without the investment.

“What we care about is impact, not posture. We want to have an impact, and make this world a better place,” he concluded.