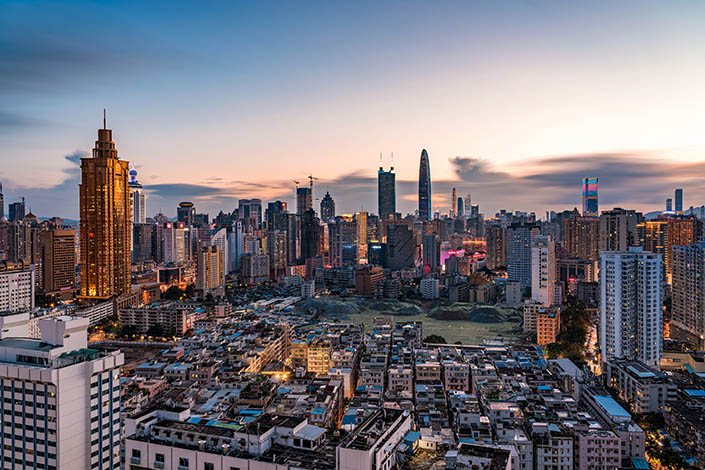 State media reported that the commission emphasized the need to “reasonably regulate excessively high incomes,” and that while the party allowed some people to “get rich first,” it is now prioritizing “common prosperity.”

The issue of wealth redistribution came into the spotlight last year when Premier Li Keqiang noted in his annual press conference that around 600 million Chinese people earn an average of 1,000 yuan ($141) a month. China’s official Gini coefficient, a measure of wealth inequality, sunk to 0.462 in 2015, but went up in the following three years. The Covid-19 pandemic has further exacerbated inequality.

Read more
Opinion: China Has 600 Million People With Monthly Income Less Than $141. Is That True?

Wang Dehua, a research fellow at the National Academy of Economic Strategy, told Caixin that “common prosperity” has now been officially established as a strategic goal, and that wealth redistribution will be a key measure. “Third distribution” is now part of a “fundamental mechanism” to ensure better social equality, he said.

Wang Xiaolu, a deputy director of think tank the National Economic Research Institute, explained that “third distribution” refers to enterprises or individuals giving away some of their wealth voluntarily to charities. This is contrasted with “primary distribution,” which is based on market principles, and “redistribution,” which is largely done through fiscal measures such as taxation and transfer payments.

The concept immediately began to concern some, who worried that “third redistribution” could be made obligatory. To calm these nerves, Han Wenxiu, an executive deputy director at the commission’s general office, reassured the public on Aug. 26 that it does not mean “robbing the rich to give to the poor.”

Many academics hold the view that the government should continue to rely on primary market distribution and redistribution to reduce the income gap. “Third distribution” should only be a supplement.

Shi Zhengwen, director of the Center for Research in Fiscal and Tax Law at the China University of Political Science and Law, asserts that primary distribution works as the basis for all income distribution, and that the key to greater equality is to build efficient markets in which most people are able to make a decent income. When markets fail, the government should step in to carry out the duty of redistribution.

How to make primary distribution more equal has thus become a hot topic among academics. One study shows that the market accounts for more than 85% (link in Chinese) of the total disposable income of Chinese households. Yet administrative monopolies and unfair competition are still rampant and prevent the market from playing its role properly, says Wang Xiaolu. For example, in many cases, private enterprises and state-owned enterprises (SOEs) do not compete on equal footing, while banks favor big state firms more.

Shi looked to the reform of factors such as land and labor, which has lagged behind. Huge numbers of migrant workers have moved to cities, but are still unable to enjoy the same benefits as those with urban household registration, or “hukou.” Collective bargaining is almost non-existent. And collectively owned rural land is still not treated in the same way as urban land when it comes to ownership rights and pricing.

Moreover, long-existing preferential policies for certain industries have enlarged the income gap between workers in different sectors. In one example, the relatively loose monetary policies that have been in place in the past decade have disproportionately benefited the financial and real estate sectors. Reforms are seen as urgently needed to adjust wealth distribution across a whole range of sectors.

Signs have emerged that things are beginning to change. The real estate sector is tightening. Some internet companies are no longer able to enjoy particular tax breaks conferred to software companies. Giant couriers have been asked to pay proper social security contributions for their delivery staff.

Redistribution by the “visible hand”

The government-led redistribution of wealth is seen far from adequate in China. Data show that in Organisation for Economic Co-operation and Development (OECD) member countries, government redistribution measures reduce the Gini coefficient by as much as 30%. Yet in China, the reduction is only about 8% (link in Chinese), according to the research conducted by researchers including professor Li Shi of Zhejiang University.

It’s commonly agreed among academics that taxation, fiscal spending and the social safety net are the key areas that China’s government needs to improve to achieve the goal of common prosperity.

The reform of taxation has always attracted wide attention, and how to reform the personal income tax has proven to be the greatest concern among the public. At the moment, it is the fourth-largest tax in China, but the revenue it brought in accounted for only 8.2% of the country’s total tax revenue in 2020.

Over many years China’s personal income tax regime has been criticized as “heavy on labor, light on capital.” Despite a round of reform in the past few years, the personal income tax still has progressive rates between 3% and 45%, much higher than the 20% that’s taxed on various types of capital gains such as interest and dividends.

Practically it’s also much easier to collect personal income tax, which is deducted automatically by employers on paydays, leaving little room for tax evasion. Tax on capital gains, usually critical to people with higher incomes, has turned out to be much more difficult to collect because the information controlled by different government departments is not sufficiently shared. The recent tax evasion case involving famous actress Zheng Shuang shows just how hard it is to collect the correct amount of tax from the richest people in China.

The direction for the future reform of personal income tax, according to the Ministry of Finance, is to reasonably expand the range of taxable items, as well as improve the way tax deductions are calculated. It is, however, unclear whether the top rate of 45%, a big concern for the public, will be reduced any time soon.

A lack of a national property tax levied on ownership is another reason why redistribution of wealth hasn’t worked well, say several academics Caixin talked to. They suggest China introduce new taxes on real estate and inheritance — two common taxes in the developed world.

Taxing real estate ownership has been discussed for nearly 20 years without much progress. There have again been discussions at the ministerial level about several pilot schemes that might obtain a mandate from the national legislature later this year, sources with knowledge of the issue told Caixin. As for inheritance tax, there have been no reported formal discussions since October 2017.

Aside from taxation, the current weak social safety net has impeded China’s progress of common prosperity, too. Due to historical reasons, China’s ill-developed social safety net offers different groups of people different sets of benefits. To use pension as an example, in some cases, people working for the government and SOEs make much higher contributions than those working in the private sector. As a result, they enjoy a much better pension payout upon retirement, leading to higher income gaps between the public and private sectors.

Regional differences are another factor. Pensions are mostly managed on the provincial level, while basic medical insurance is managed at the city level or even lower. It’s hard to move contributions and payouts between regions, further denting people’s will to make proper contributions.

In addition, China has not spent adequate fiscal resources on social benefits such as education, health service and the social safety net. One study shows that in 2015, China’s expenditure on social benefits accounted for 22% of total fiscal expenditure, whereas in most OECD countries the number was between 30% and 45%. As China’s population quickly ages, China’s fiscal expenditure on the social safety net will have to grow rapidly.

How to promote “the third distribution”?

It’s widely acknowledged that Li Yining (link in Chinese), a professor at Peking University, was the first academic to raise the concept of the “third distribution” in China. In 1991, Li argued that morality should be recognized as a force for income distribution, besides the market and government.

Yang Bin, a professor at Tsinghua University’s School of Economics and Management, went further, saying that “third distribution” should be motivated by virtuous social values (link in Chinese) and encouraged by laws and regulations. He said that behind it is the “hand of society.”

As things stand, the scale of China’s “third distribution” is very small, comparing to that of the U.S. or European countries. A report compiled by the China Charity Alliance shows that in 2019, total domestic and foreign donations in China amounted to 170.1 billion yuan, of which 61.7% was donated by enterprises.

Many researchers believe this small scale can be explained by the fact that there’s still no inheritance tax or gift tax in China. People with substantial assets usually pass their wealth directly down to their offspring without even thinking about donating to charities.

By contrast, researchers note that in many developed countries, taxation is devised in a way to discourage rich people to pass all their wealth down to their children. Sometimes the rate of inheritance tax could be as high as 60%. China could learn from this.

At the moment, tax benefits from donations can be realized through both personal income and enterprise income taxes. In practice, however, there have been complaints about the complexity of the administrative procedures around actually getting the tax deductions. There are also concerns that the deduction rates are simply not enticing enough.

The weakness of China’s charities is also to blame. A few high-profile scandals have eroded public trust toward the charity sector as a whole. On the other hand, a new generation of charities is finding it hard to develop under China’s current laws and regulations.

On a micro level, many charities have their own problems in terms of daily operations. Areas such as strategic development, talent management, media relations and publicity all have a lot of room for improvement. Charities should “manage ‘black swan’ risks well and pay particular attention to the proper, transparent and efficient utilization of funds raised,” says professor Yang, who fears that such risks, once they appear, may well hinder the progress of the “third distribution.”