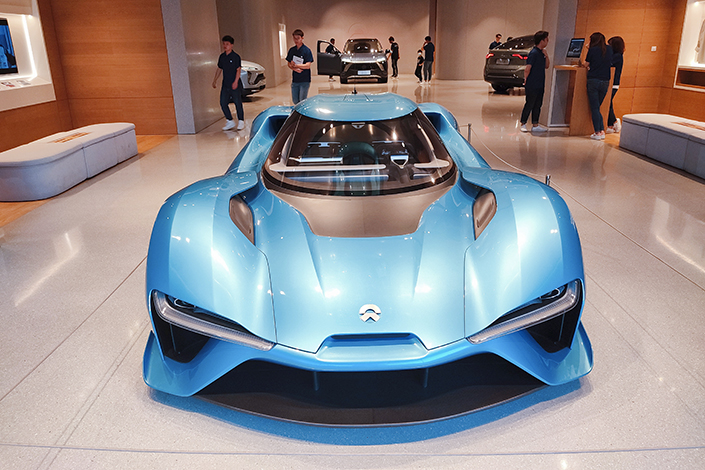 A Nio EP9 electric supercar is on display on July 17 in a Nio store in Shanghai. Photo: VCG

Other investors in the round included lifestyle service and food delivery giant Meituan, Jinyi Capital and Bluerun Ventures.

Founded in 2013, Shanghai-based Gaussian said it focuses on developing delivery and cleaning robots for hotels, hospitals, airports and offices, with clients spanning 40 countries and regions.

Semiconductor Manufacturing International Corp. (SMIC) Vice Chairman Chiang Shang-Yi resigned after serving in the position for less than a year because he wants to “spend more time with his family,” according to a company filing on Thursday.

GoTo Group, an Indonesia-based tech company created after the merger of ride-hailing firm Gojek and e-commerce firm PT Tokopedia, has raised over $1.3 billion in the first close of a pre-IPO funding round from several investors including Abu Dhabi Investment Authority, Avanda Investment Management and Tencent, Bloomberg reported on Thursday.

GoTo said that it expects more investors to join the fundraising in coming weeks. The firm has been aiming to raise as much as $2 billion at a valuation of $25 billion to $30 billion before launching an IPO at home and a subsequent U.S. share sale, Bloomberg reported in July citing sources familiar with the matter.

The first was a new sales record — 540.3 billion yuan ($84.5 billion) worth of goods were sold across its platforms over the 11 days through Nov. 11. The second was record low growth in gross merchandise volume, which dipped below double-digits for the first time to hit 8.45%. In 2020, Alibaba almost doubled its annual GMV for the event when it expanded a traditional 24-hour run to a series of promotions over 11 days.

Despite the downward trend, the news has been met with optimism by stock markets, amid a lagging consumption recovery and tighter scrutiny of the country’s e-commerce giants this year that may have led investors to expect the worst.

Tencent-backed mapper NavInfo Co. Ltd. has signed a three-year agreement with Volvo Cars Technology (Shanghai) Co. Ltd. to provide compliance services for the carmaker’s cloud-based Internet of Vehicles platform, according to an exchange filing (link in Chinese) on Thursday.

Chinese Tesla challenger Nio Inc. shrank its loss in the third quarter as it notched strong gains in deliveries despite a global chip shortage.

In the three months through September, the New York-listed electric-vehicle maker narrowed its net loss by 20.2% to 835.3 million ($129.6 million), according to its earnings report released on Tuesday.

Quarterly revenue totaled 9.8 billion yuan, up 116.6% year-on-year, about 88% of which came from vehicle sales. In the quarter, Nio delivered 24,439 cars, about double what it did in the same period last year, according to the report.

Over the coming years, JD.com will “increase investment in countries that conform to JD’s strategies, no matter if it is on warehousing, logistics or supply chain,” Xin Lijun, chief executive of JD’s retail business, told CNBC. Xin said that JD was carrying out “further strategic analysis in Vietnam and Europe” as potential locations to expand in.

Taiwan’s Foxconn has agreed to buy an Ohio assembly plant from cash-strapped U.S. electric-truck maker Lordstown Motors for $230 million, the two companies said in a joint statement on Wednesday, the latest step for the iPhone-assembler into vehicle manufacturing.

Foxconn has also agreed to pursue a contract manufacturing agreement to assemble Lordstown Motors’ first product, an all-electric pickup truck called the Endurance, according to the statement.

Powered by a new system-on-a-chip, the Nvidia Drive Orin platform boasts a processing speed reaching 254 trillion operations per second, and is designed to handle the large number of applications and deep neural networks that run simultaneously in autonomous vehicles and robots.

In a separate statement released on Wednesday, QCraft, backed by TikTok-owner ByteDance, said that the hardware solution is equipped with a sensor system consisting of nine cameras, five lidars and four millimeter-wave radars.

This Caixin Tech Insider was compiled by Ding Yi (yiding@caixin.com) and edited by Joshua Dummer (joshuadummer@caixin.com). Send us your tips and feedback.