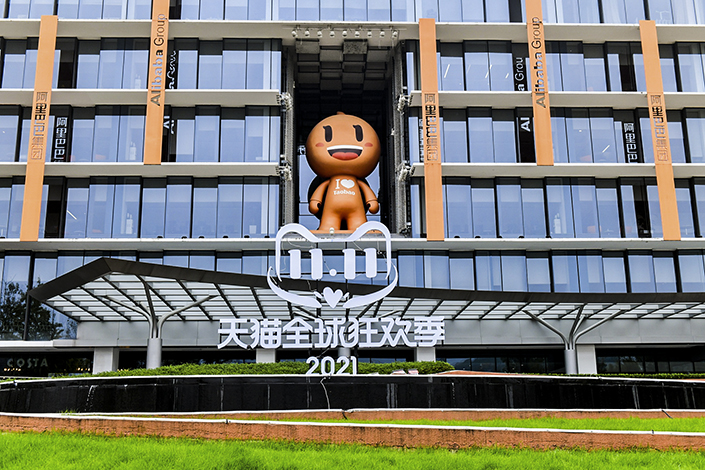 The first was a new sales record — 540.3 billion yuan ($84.5 billion) worth of goods were sold across its platforms over the 11 days through Nov. 11. The second was record low growth in gross merchandise volume (GMV), which dipped below double-digits for the first time to hit 8.45%. In 2020, Alibaba almost doubled its annual GMV for the event when it expanded a traditional 24-hour run to a series of promotions over 11 days.

Gross merchandise volume refers to the value of goods sold by merchants on the platform.

Despite the downward trend, the news has been met with optimism by stock markets, amid a lagging consumption recovery and tighter scrutiny of the country’s e-commerce giants this year that may have led investors to expect the worst.

“The solid Singles’ Day performance alleviates some recent concerns around weakness in consumption trends in China,” said Barclays analyst Jiong Shao in an email to Bloomberg. “The group has been under a lot of pressure since earlier this year with many stock prices having been cut in half or more.”

The festival of consumerism was launched by Alibaba in 2009 and originally capitalized on an unofficial Nov. 11 holiday that celebrated singletons — the “11.11” date having the most “singles.” It has since expanded from one day to around three weeks, and the duration and discounts varied among e-commerce giants, but all ended on Nov. 11.

This year, Alibaba’s Tmall and JD.com presales began on Oct. 20. Tmall had two main official sales periods, one from Nov. 1 to 3 and the main event on Nov. 11, while JD.com’s sales started from Oct. 31 and a final “price-off” starting on Nov. 10.

The three e-commerce giants have all been chided by the market regulator this year. Pinduoduo’s group-buying platform Duo Duo Maicai was fined 1.5 million yuan in March for using its large capital reserves to “disrupt market order” through excessive price subsidies. Not long afterwards, Alibaba was punished with a record penalty of $2.8 billion for violating antitrust laws, followed by JD.com’s 300,000 yuan fine in May.

The annual growth rate of consumer goods sales was 4.4% in September, an increase from the 2.5% figure recorded in August. However, the September figure was still the second-lowest monthly expansion since November 2020 and was well off the year’s peak of a 34.2% expansion in March.

The decrease in consumption spending likely has multiple causes, including pandemic prevention and control measures to control sporadic Covid-19 outbreaks, as well as longer-term trends such as weaker growth in individual income and gloomy economic forecasts.

Bloomberg contributed to the story.