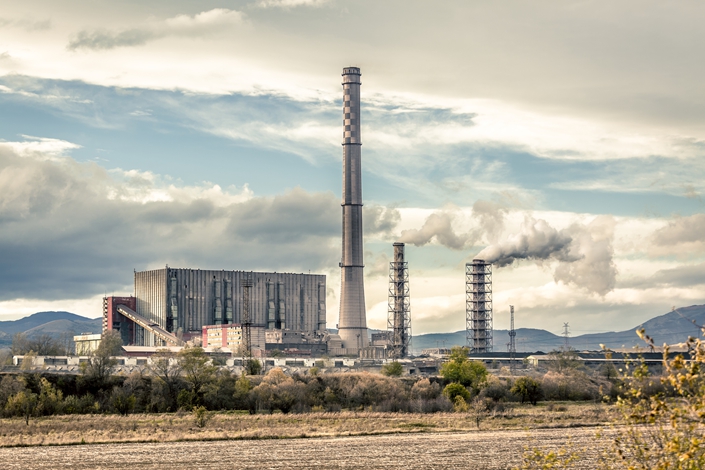 The Carbon Border Adjustment Mechanism is one of the key elements of the EU’s “fit for 55” regulatory package to achieve carbon neutrality by 2050. Photo: VCG

(Oxford Analytica) — One of the key elements of the EU’s ‘fit for 55’ regulatory package to achieve carbon neutrality by 2050, which is now before the European Parliament, is the Carbon Border Adjustment Mechanism (CBAM). The scheme will require non-EU producers to pay a fee on the iron and steel, cement, fertilizers, aluminum and electricity they export to the EU from 2026. This will aim to reflect the CO2 cost that EU producers pay under the EU’s Emissions Trading System (ETS).

The EU hopes to expand the coverage of CBAM to other products after the scheme becomes fully operational in 2026. Several important third countries have already expressed their concern with CBAM, warning that it could discriminate against certain economies and risk starting a trade war. As CBAM currently stands, there is also a strong chance that the scheme will be subject to legal challenges regarding its compatibility with international trade rules.

• Carbon leakage could still occur in those industries covered by ETS but not CBAM, such as chemicals, ceramics and paper.

• CBAM will bring significant administrative costs, with small and medium-sized firms set to suffer the most.

• The narrow coverage of CBAM reduces its impact on least developed regions, but that could change if the scheme is extended to other areas.

Under the EU’s ETS, a cap is placed on the amount of greenhouse gas emissions that can be released from industrial installations in certain sectors, with a combination of free and traded allowances.

This cap is to be reduced and free allowances phased out, which will raise the price of production involving emissions. This leads to the risk that production will be relocated outside the EU, with products then imported back — a process known as carbon leakage.

The CBAM addresses that risk by mandating that importers of iron and steel, cement, fertilizers, aluminum and electricity pay a fee that reflects the costs EU domestic producers pay under ETS prices. It covers some, not all, of the industries included in ETS.

The levy will apply to all imports of those products from any non-EU country, except for those participating in the ETS or with a comparable scheme. This currently covers countries in the European Economic Area and Switzerland. Draft proposals will allow for deductions in CBAM prices to reflect carbon charges levied by the country of origin of a good.

The sectors included account for a substantial proportion of the industrial greenhouse gas emissions covered by ETS, with iron and steel at nearly 23%, and cement at 17%. However, they are only around 3% of the EU’s total imports, according to 2019 figures. Revenues raised will go to the EU’s budget. The phasing-out of free allowances will run to 2035.

The EU will keep the scheme under review until 2026, when it is scheduled to enter full operation. In particular, there is a question of whether to extend CBAM to cover more products in the value chain, for example in terms of their electricity use. However, this could be more complex to calculate than the initial products chosen.

Within the EU, stakeholders have generally been supportive of the principle of a CBAM scheme, while expressing concerns about whether the detail, coupled with broader EU proposals, will lead to deindustrialization.

In particular, right-wing parties have been concerned to ensure that the design does not undermine the EU’s industrial competitiveness vis-a-vis other regions. The first formal response from an affected sector, the cement industry, has argued that free ETS allowances for EU companies should only be removed once it can be proved that carbon costs can be equalized between EU and non-EU production.

Third countries have been particularly concerned about the potential impact, with a number including Brazil and South Korea having already raised concerns. In March, U.S. climate envoy John Kerry warned such a system had “serious implications for economies, and for relationships, and trade” and should only be used as a last resort.

The United Kingdom is not a large-scale exporter of any of the products covered, and only in iron and steel is it one of the top five suppliers to the EU, a market which is likely to diminish given these figures cover the period before Brexit-associated trade barriers were erected. In general, it seems that Russia, Turkey and Ukraine will be the most affected by CBAM, based on their supply of goods to EU markets.

Countries including China and Canada have introduced or are considering their own carbon pricing schemes. OECD Secretary General Mathias Cormann has suggested the implementation of a global system to prevent the possibility of trade war. No definitive EU view on the prospect of a global carbon price has yet to emerge, though it is plausible in the medium- to long-term that there will be some agreement between comparative economies.

CBAM constitutes an economic approach to tackle climate change. Thus, its consistency with international trade rules will come under significant scrutiny. Brazil, South Africa, India, and China have already made clear their concerns that CBAM’s coverage of products unfairly discriminates against their economies.

Legal scholars have suggested a number of ways in which CBAM may be illegal under WTO rules.

It may be discriminatory if it involves charging different countries different prices for what appear to be identical goods.

There is a general exception clause which allows for measures to be taken to protect natural resources, but CBAM may not qualify if seen as arbitrary or a disguised restriction on trade. It could also be argued that there are better ways to tackle climate change.

The EU has argued that the scheme has been designed in compliance with WTO rules, and other legal scholars believe that jurisprudence is moving towards national regulatory schemes being allowable so long as not clearly discriminatory.

Moreover, some senior WTO officials fear there could be a wider challenge to international trade rules if they are viewed as an obstacle to prevent action against climate change.

If the scheme is implemented as expected, it is almost certain that disputes will be raised by other countries. A WTO case can only be raised once another country can demonstrate harm, which is likely to mean 2026 at the earliest.

The intention of the European Commission is for the system to take effect in 2023, which would require agreement by European Council and Parliament. The process is only just starting.

There are signs of opposition from some Central and Eastern European countries including Poland, who feel they will disproportionately suffer from the EU’s green legislative agenda. However, there will probably not be enough opposition to stop the scheme proceeding.