By Xiang Kai and Li Hang 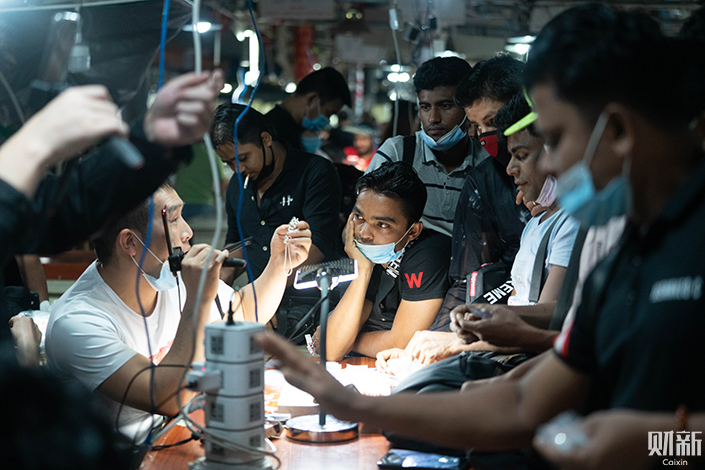 A group of Myanmese businessmen gather around a livestreamer selling jade products in Ruili, Southwest China’s Yunnan province, in April 2020.

Repeated Covid-19 outbreaks have drawn attention to a small Chinese city bordering Myanmar, where months of strict lockdown measures have forced many merchants working in its thriving jade industry to shut shop and leave.

Taking advantage of the rich jade resources across the border, many residents of Ruili, Yunnan province, make their living by selling and processing imported jade or in industries which depend on the commerce.

However, Ruili’s links with Myanmar have been all but severed over the course of the pandemic due to strict regulations to prevent imported infections. The city has undergone three lockdowns, with the latest kicking off in July — involving some residential areas being sealed off completely, transport in and out of the city being suspended and rounds of mass testing.

This has had a huge impact on entrepreneurs. Da Peng (pseudonym), a 40-year-old jade merchant, left Ruili in August after reaching the conclusion that going on was impossible.

Da Peng founded his own company in 2016 and at one time had hundreds of employees. Before the pandemic, he often travelled to mines in Myanmar to buy unprocessed jade.

But since the government has upped efforts to seal the porous 170-kilometer boundary, including erecting a barbed-wire fence, the flow of people and raw jade across the border has dried up.

The last straw was when local logistics firms were told not to transport jade or jewelry. Da Peng, like many of his peers, moved his business to Pingzhou, a city in South China’s Guangdong province known for its jade bracelets.

A special border trade zone in Ruili — Jiegao — has been the most strictly controlled area in the city, with thousands of people evacuated for virus control. While most of Ruili’s urban core is separated from Myanmar by a river, Jiegao sits on the Myanmese side and is cheek-by-jowl with the town of Muse.

“Before the epidemic, there was a complete jade trading industry chain in Jiegao, ranging from stone gambling and processing raw stones to selling products,” said Kuang Shan, Secretary-General of Ruili Jade Association, who has stayed in Ruili. “Everything has changed.”

Stone gambling is the practice in which customers buy a cheap rock that may contain jade inside. Lucky gamblers might find that when they break open the stone, they’re rewarded with a haul of precious jade, while most are disappointed.

On April 1, the local government announced that all online and offline jade trading activities should be suspended according to the epidemic prevention and control requirements. This suspension is still in place.

This struck a blow to livestreaming e-commerce in Ruili, which before the pandemic, helped to drive jade sales and brought in tourists. Sales of jade via livestream were worth 3.66 billion yuan in just the first five months of 2020.

Local livestreamers knew exactly what the audience wants to see. Taking the advantage of their position on the border, they would typically invite Myanmese performers into their livestreaming studio to act out plays, which was once a unique trademark of local livestreaming e-commerce.

Due to the restrictions, jade livestreamers have mostly moved on to the Guangdong cities of Jieyang, Pingzhou, and Sihui.

Success in these new towns doesn’t come as easily as it did back in Ruili though, as livestreamers have lost the dramatic Myanmese performances that helped them to stand out in a crowded market, plus their overheads have grown bigger.

“Many of our peers have gone bankrupt, and I can just barely sustain the business,” Da Peng said.

Another Ruili jade merchant, Kuang Shan, is optimistic that the trade will get back to normal sooner or later. “In the future, a large number of people who want to take risks and dare to gamble will gather in Ruili,” he said. “Ruili is unique.”