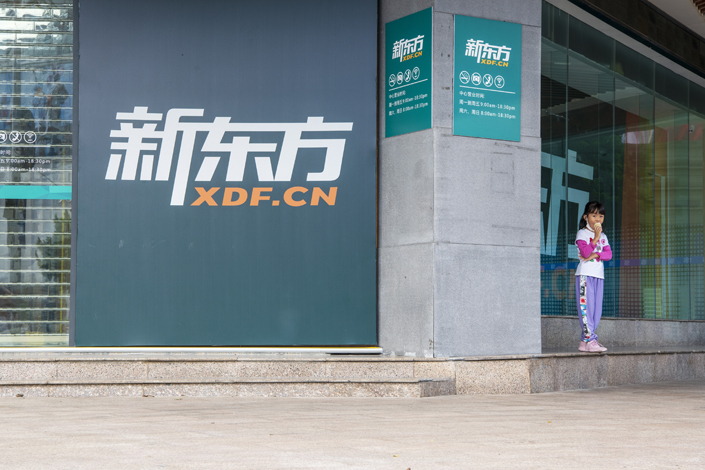 The pricing guide said Beijing municipal authorities will set a benchmark price for offline classes with 10 to 35 students. Photo: VCG

Authorities in Beijing will put a cap on after-school class fees in a bid to guarantee more equitable access to school curriculum-based tutoring, as part of efforts to flesh out the current overhaul of the private education sector.

The Beijing Municipal Commission of Development and Reform said in a draft document unveiled Tuesday that after-school classes, both online and offline, will be subject to a government pricing guide that sets benchmark and floating fees (link in Chinese), with prices capped at 10% over the benchmark.

The pricing guide said the city’s development and reform departments and education administrative departments would set a benchmark price for offline classes with 10 to 35 students, while pricing for the other types of classes would be calculated using a yet to be defined “price ratio.”

The document, which is available for public comment until Dec. 15, came out not long before the year-end deadline for after-school institutions to register as nonprofit entities in order to gain government permits, as required by the central government’s sweeping “double reduction” policy issued in July.

Specific pricing standards will be introduced “in the near future,” according to Tuesday’s document, which notes that the pricing guide “provides long-term targeted regulation” for the city’s after-school tutoring institutions.

The statement added that the guidance helps “guide training institutions to return to the attributes of public welfare.”

A staff member at the city’s education commission told Caixin that the government pricing guide will be calculated based on after-school tutoring entities’ reports of their operation costs. The source said that prices will likely be “no more than 100 yuan per class.”

Prior to the authorities’ efforts to rein in the big-money private education sector, there has been huge demand for tutoring in China as affluent parents seek additional education resources for their kids, especially one-on-one tutoring and small classes that cost thousands of yuan, amid an extreme imbalance of education resources across the country.

The pricing cap and ongoing pandemic may result in more tutoring classes moving online, while one-on-one tutoring and small classes could be gradually eliminated due to high hiring costs.

The source from the city’s education commission said that the pricing cap means that online classes that can increase attendance numbers “infinitely” will be the most economical. Hence, government intervention could push the tutoring sector to change its mindset from “training for excellence” to “helping students catch up,” thereby promoting education equality with its “complementary status.”

According to Tuesday’s draft document, authorities from different departments will work together to supervise after-school tutoring institutions’ revenue, costs, profits and related transactions, as well as their implementation of government policies.

The plan also includes strict management of such institutions’ operating costs. The document requires that average employee salaries should not be “significantly higher” than those of employees in nonprivate education companies in the city, who earned an average of 200,000 yuan last year, according to official data.