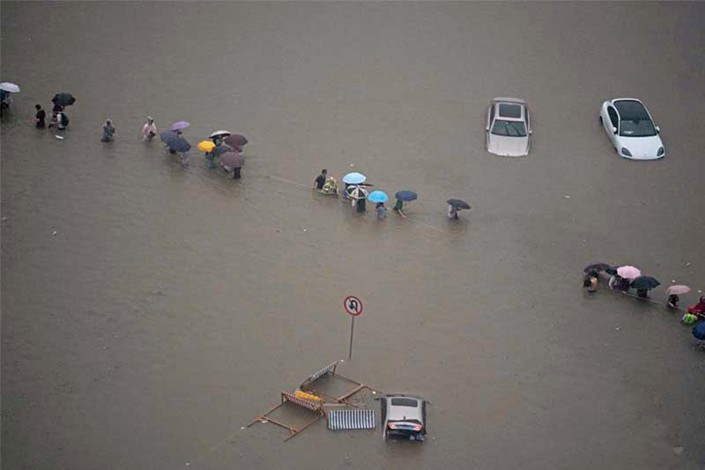 The Caixin ESG biweekly has been upgraded to the China Green Bulletin! And what you receive is the free biweekly version. Sign up here for our twice-a-week email to keep updated with green, energy and ESG news from China.

From devastating flooding in central China to torrential downpours in Europe, record-breaking natural disasters since summer have wreaked havoc across the world, and realization is setting in that many countries have not yet made climate adaptation plans for extreme weather. Read more here.

Cheng highlights the importance of circular economy (CE) for China to achieve its ambitious carbon goals. He points out that while CE was seen as a strategy for resources recycling, it is being expected to play a vital role in reducing greenhouse gas emissions from a full life cycle perspective. According to Cheng, developing CE is a workable solution to flatten the environmental Kuznets curve and cut the green transition cost.

Specifically, Cheng analyzes two commodities - steel scrap and aluminum scrap - as examples to elaborate the contribution of recycled resources. By applying electro-smelting with steel scrap as material, sintering and pelletizing process are skipped, and therefore much less coking coal is needed. Similarly, the usage of aluminum scrap not only saves the energy-wasting electrolytic process, but also circumvents the redox reaction which produces new carbon dioxide.

Since prices for most recycled resources are still higher than the original ones at present, Cheng further underlines the role of carbon market. An effective market will reasonably price in the cost of carbon emission and drive the enterprises to choose recycled resources which are both climate-friendly and conducive to economic development. By actively developing circular economy, China can expect a more natural and smooth green transition, said Cheng.

Nov 11 - China and the U.S. have pledged to work together to enhance climate action over the next decade in a joint declaration announced at the COP26 climate summit in Glasgow, noting that cooperation will include consensus on reducing methane emissions in the 2020s. At a time when China and the U.S. are at odds over other international issues, the agreement declares an intent to take “increased actions” on emissions reductions and limitations. It is the first time China has pledged to address the issue of methane emissions, on which the U.S. proposed stricter regulations.

Nov 11- The National Association of Financial Market Institutional Investors (NAFMII), the interbank bond market self-regulatory body under the central bank, announced a pilot program to allow foreign issuers to sell bonds for social responsibility and sustainable development purposes in China’s interbank market. The RMB-denominated bonds sold by foreign issuers are often referred to as Panda Bonds. Funds raised from Panda Bonds are usually invested in China due to currency control, and often seen as a cheaper way for international corporations to finance their China operations. With the addition of the pilot program, the government is opening its doors for greater international participation in China’s transformation toward a green economy.

Nov 12 - The China Banking and Insurance Regulatory Commission (CBIRC) announced that some banks and insurers involved in its annual evaluation fail to meet corporate governance guidelines. The CBIRC ratings placed firms into A, B, C, D and E groups. The breakdown by institution saw 59% of the assessed firms rated as C (pass), followed by 19.7% B (fine)-rated firms. And 138 institutions were rated E (poor), representing 7.4%. No institution got an A rating, denoting “excellent.” That means, fewer than 20% of firms were valued as “higher than passing level” for their corporate governance. Experts believe more efforts are needed on information disclosure and ESG engagement.

Nov 8 - Chinese researchers sounded the alarm bell on extreme weather’s impact on public health in a report published on the Lancet, warning that China’s public health is under imminent threat from climate change. In particular, they noted that the frequency and intensity of flood events in China continue to rise, and though the country has improved its emergency response capacity, more resources and actions are required to mitigate extreme weather events. The call for action highlights the economic and social costs of climate change in China as well as the funding gap for climate-resilient infrastructure in China, which the World Resources Institute estimated to exceed 500 billion yuan per year.

Nov 8 - Zhou Xuewen, Vice Minister of China’s Ministry of Emergency Management (MEM), said that the ministry is currently evaluating its extreme weather contingency plan, which is expected to improve government agencies’ response to meteorological warnings. The Ministry is also exploring methods to quantify meteorological warnings and provide detailed guidance on appropriate governmental responses. The reform comes after the devastating flooding earlier this year exposed problems in provincial response systems. In particular, local governments were criticized for failing to respond to meteorological agencies’ repeated warnings during the Henan flood. The revised plan is likely to see government agencies follow through on extreme weather warnings.

Nov 13 – In the annual conference of ESG 30 Forum held on the sidelines of Caixin Summit, a white paper on ESG summarizes the progress of ESG mutual fund, ESG policies, and ESG investments in China and makes suggestions on future development. During the forum, speakers exchanged their views on the integration of ESG into economic development, enabling new growth amid carbon goals, improvement of ESG disclosure and rating standards. Launched by Caixin, China ESG30 Forum is a high-level committee that brings together 30 experts annually to discuss ESG-related theory, policy and practical issues in China.