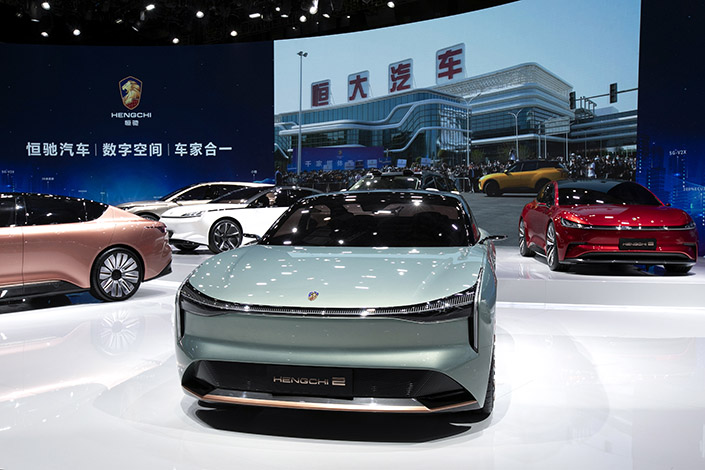 An Evergrande booth at the Shanghai Auto Show on April 25. Photo: VCG

Shares of China Evergrande Group’s electric-vehicle unit jumped on Monday after the company announced it was planning to sell around HK$2.7 billion ($347 million) worth of stock to fund production of its first-ever new-energy vehicle (NEV) amid ongoing liquidity issues.

Hong Kong-listed China Evergrande New Energy Vehicle Group Ltd. (Evergrande Auto) said it was planning to sell 900 million shares, or 9.05% of its total issued shares through a top-up placing to at least six investors for HK$3 apiece, according to a filing issued to the bourse on Friday evening. The figure represents a 15% discount to the company’s closing price that same day.

The share sale will be “paving the groundwork for putting Hengchi new energy vehicles into production,” the company said.

Shares of the Guangzhou-based company rose 11% to close at HK$3.92 on Monday.

Evergrande Auto has yet to deliver its first vehicle amid liquidity woes. During a visit by Caixin to its Tianjin plant in September, workers were seen rushing to finish fitting out the body shop so the automaker could meet a mid-November deadline for pre-production of the Hengchi 5.

In an Oct. 11 announcement published on Evergrande’s website (link in Chinese), the carmaker said it had been ramping up production to ensure Hengchi’s first model will roll off the production line at the start of next year.

Evergrande Auto has two other manufacturing sites, in Shanghai and Guangzhou. But a person familiar with the company previously told Caixin that under Chinese government rules, the Tianjin plant must first reach capacity before the other plants can come online, meaning the firm’s hopes of ever achieving mass production rest there.

Workers at the Tianjin plant who spoke to Caixin confirmed that the company began concentrating its resources on the plant starting from June, and had arranged for equipment to be transported and workers transferred from the Shanghai factory to prepare for trial production. That means building the new model in small batches on a pilot production line to iron out any problems before scaling up.

Producing — and selling — its first car remains a top priority, a person familiar with the company’s strategy said. Unless mass production can be achieved, Evergrande Auto will have limited appeal for investors, he said.

In a September filing, the company warned that it was encountering a “serious shortage of funds.” Pressure on liquidity meant the payment of some operating expenses had been suspended and some suppliers had stopped doing business with the company.

Evergrande Auto’s increasingly desperate situation marks a stark contrast with a year ago when investors were clamoring to get exposure to China’s new-energy car market. Its share price shot up from HK$19.38 at the end of September 2020 to a peak of HK$72.25 in February this year after the company announced plans to raise HK$26 billion from six new strategic investors.

Read more
In Depth: How Evergrande Created China’s Most Valuable Automaker Without Selling a Single Car