In Depth: Evergrande Auto Races to Convince Investors It Can Make a Car

By An Limin, Bao Zhiming and Kelsey Cheng 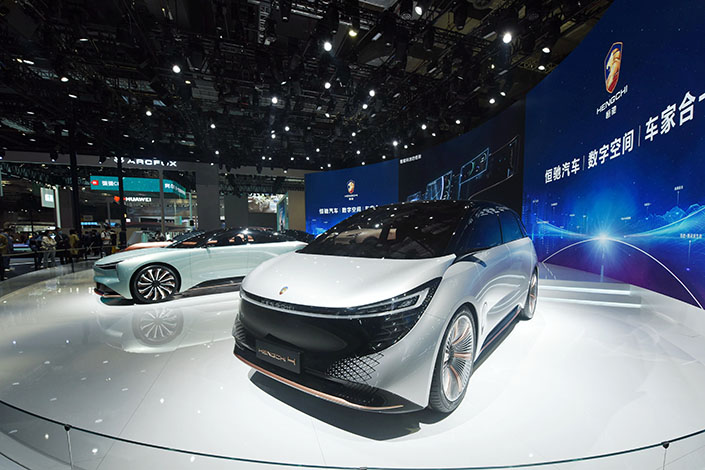 While the rest of the country was enjoying a three-day public holiday to celebrate the Mid-Autumn Festival, workers were rushing to finish fitting out the body shop so the automaker could meet a mid-November deadline for pre-production of the Hengchi 5, Caixin learned on a visit to the plant. The pure-electric SUV is the closest to mass production out of the six models unveiled under the Hengchi marque in August last year, two sources with knowledge of the matter told Caixin.

Evergrande Auto has two other manufacturing sites, in Shanghai and Guangzhou, but it is pinning its hopes on the Tianjin plant, concentrating all its efforts on getting mass production going to boost its chances of survival.

Workers at the Tianjin plant who spoke to Caixin confirmed that the company began concentrating its resources on the plant starting from June, and had arranged for equipment to be transported and workers transferred from the Shanghai factory to prepare for trial production. This is a key part of the development of a new model which involves building small quantities of the vehicle on a pilot production line for evaluation purposes and to iron out any problems before it enters mass production.

Producing — and selling — its first car remains a top priority, a person familiar with the company’s strategy said. Unless mass production can be achieved, Evergrande Auto will have limited appeal for investors, he said.

Read more
In Depth: How Evergrande Created China’s Most Valuable Automaker Without Selling a Single Car

Whether it can succeed remains to be seen. In a filing to the Hong Kong Stock Exchange dated Friday, Evergrande Auto warned that it was encountering a “serious shortage of funds.” Pressure on liquidity meant the payment of some operating expenses had been suspended and some suppliers had stopped doing business with the company.

The automaker had hoped to raise funds through an IPO on the STAR Market, the Shanghai Stock Exchange’s board for technology and innovation stocks. But in a filing dated Sunday, the EV unit said it had abandoned the plan, putting it in an even more precarious financial position.

Evergrande Auto’s increasingly desperate situation marks a stark contrast with a year ago when investors were clamoring to get exposure to China’s new-energy car market. Its share price shot up from HK$19.38 ($2.49) at the end of September 2020 to a peak of HK$72.25 in February this year after the company announced plans to raise HK$26 billion from six new strategic investors. The shares fell to HK$2.03 on Monday but surged 44% on Wednesday to close at HK$3.35 after parent China Evergrande Group said it was selling part of its stake in Shengjing Bank Co. Ltd. for just under 10 billion yuan.

The cash crunch has forced Evergrande Auto to scale back its NEV ambitions that began back in 2017 with an ill-fated investment in electric vehicle startup Faraday Future Intelligence Electric Inc., owned by controversial Chinese businessman Jia Yueting who fled to the U.S. in 2017 and filed for bankruptcy in 2019 with a personal net debt of $2 billion.

Its plans took off in January 2019 when Evergrande Health Industry Group Ltd., which was later renamed Evergrande Auto, embarked on an international spending spree starting with the purchase of a 51% stake in National Electric Vehicle Sweden AB (NEVS) for almost $1 billion, a shareholding that was later increased to 100%.

Hui Ka Yan, the founder of now troubled Evergrande, the parent of Evergrande Auto, had ambitious plans for the venture. The property tycoon, known on the mainland as Xu Jiayin, vowed (link in Chinese) in March 2019 to become the world’s largest and most powerful new energy vehicle group and set a target of selling 1 million vehicles by 2025 and 5 million by 2035.

The acquisition gave the company a production base in the city of Tianjin, a car manufacturing hub some 120 kilometers southeast of Beijing. NEVS had established a subsidiary in Tianjin in 2015, Guoneng New Energy Automobile Co. Ltd., and had obtained the necessary qualifications from the government to make NEVs. It developed an electric sedan based on a platform bought from bankrupt Swedish automaker Saab Automobile in 2012. In June 2018, Guoneng announced it was setting up a plant in Shanghai and Evergrande Auto took over that project when it bought NEVS.

But according to people familiar with the matter, Hui thought that the Guoneng products had a “low-end brand positioning”, and soon after the acquisition, Evergrande Auto ditched it and decided to develop a new set of designs and engineering from scratch.

The result was the Hengchi brand, launched in August 2019. The company commissioned an external development agency to develop nine models and spent billions of yuan on developing its EV business.

In October of that year, the company announced that it had signed contracts with 15 top international designers to work on the individual models, and the following month held a summit for its global strategic partners (link in Chinese) in Guangzhou, where it announced tie-ups with 60 suppliers including German companies Robert Bosch GmbH, BASF SE, ThyssenKrupp AG, and Continental AG.

The original plan was to produce the Hengchi models at the plants in Guangzhou and Shanghai, and the Tianjin plant was left more or less idle. During the Shanghai Auto Show in April this year, Evergrande Auto organized a media tour of the Shanghai factory. But just two months later, the plan had changed and equipment and workers were moved to Tianjin. When Caixin reporters visited the Shanghai plant on Sept. 22, they found the production line was idle and there were only a few employees milling around the production workshop. But the workers interviewed by Caixin said they had not heard any news that the plant was going to be shut.

When Evergrande Auto released its interim results on Aug. 10, it admitted that it had suspended some of its NEV projects because of cashflow problems and that it was “proactively” working to introduce new investors who would be able to provide fresh capital. It warned that unless it received a capital injection in the short term, the timetable for mass production of its vehicles would have to be delayed.

In its statement to the Hong Kong stock exchange on Friday, the company said it had made “no material progress” on resuming its projects but that talks with potential investors were still going on. It warned that without a further capital injection, its ability to pay employees’ salary and other expenses would be affected, and there would be a “material adverse impact” on the mass production of NEVs.

As its prospects dim, Evergrande Auto has been desperately trying to hang on to its employees. On Sept. 21, the company said it had granted 323.72 million share options worth HK$1.26 billion ($160 million) at the exercise price of HK$3.90 to three directors and around 3,180 staff including those involved in research and development. The options can be exercised in tranches starting from March 2022 through September 2028 and the move is seen by analysts as an attempt to retain employees and reduce staff turnover.

One automotive industry insider said that retaining workers is crucial for the company at this moment as it’s reached the key stage of pre-production testing. If there are major changes in the team at this time it will be difficult for a new team to pick up the work if and when it resumes, he said.

Zheng Peimin, chairman of Shanghai Realize Investment Consulting Co. Ltd., said the options plan was better than nothing, but the key factor was whether employees had confidence in the company’s future.

Workers Caixin spoke to at the Tianjin plant are more worried about the short term prospects, not only for their jobs but whether they’ll get their wages on time on the next payday, or even at all.

Evergrande Auto pays its staff on the 5th and 20th of each month, Caixin has learned. On September 20, the wages of middle-level and senior personnel were not paid until the evening of September 24.

Some have already started looking for new jobs although others are prepared to wait and see. If new strategic investors can be brought on board, they said they hope the share price will rebound and the options will be worth hanging around for.