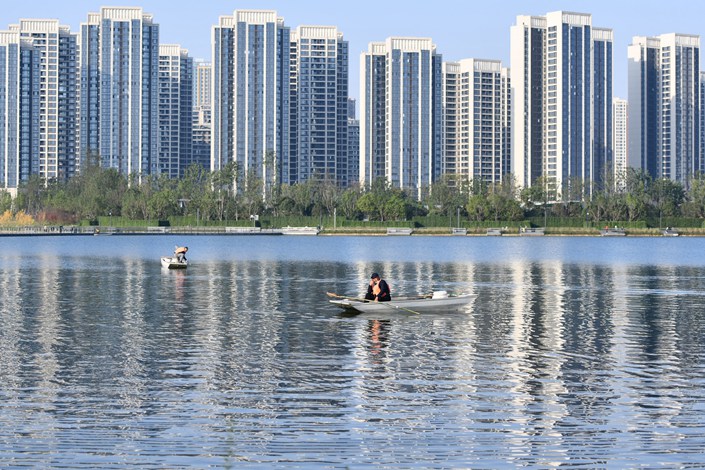 No one in real estate saw 2021’s problems coming.

So says Wang Songyang, a veteran property agent in Shenzhen. The year started off well enough. Early in 2021, he and some colleagues left the southern Chinese boomtown for the southwestern city of Chengdu, where they set up their own agency. By October, they had closed up shop.

Their agency simply couldn’t sustain itself in a market that had been hammered by the downturn being suffered nationwide. “In the second half of the year, nearly half of the agency branches in Chengdu either merged or closed down,” he said.

China released a five-year plan for developing the digital economy with specific targets and tasks, aiming to boost the contribution of core digital economy industries to 10% of GDP by 2025.

The plan (link in Chinese) was released Wednesday by the State Council, China’s cabinet. It defines the digital economy as a form of economic activity in which the key factor of production is data resources, the main carrier is the modern information network, and the principal driving force is the integration of information and communication technology as well as the digital transformation of all factors of production.

Based on the 14th Five-Year Plan, a roadmap for the country’s overall economic and social development from 2021 to 2025, the new digital economy plan fleshes out quantified goals and lays out the tactics to achieve them.

Revenue from land sales for most Chinese local governments fell in 2021, damaging budgets just as Beijing calls for faster spending to counteract a housing-market slowdown and pull the economy out of a downturn.

Thirteen of China’s 31 provinces recorded declines of more than 20% in income from selling land-use rights in 2021 from a year earlier, Tianfeng Securities Co. analysts including Sun Binbin wrote Wednesday in a note. That includes Xinjiang, Heilongjiang and the two other provinces in the northeast, and Shanxi in the north.

Wang Tao: What are some macroeconomic surprises for China in 2022

After delaying mass production for years, the electric-car unit of debt-stricken developer Evergrande said it finally produced its first actual car — 12 days ahead of schedule.

In a post (link in Chinese) on the Weibo social media platform, Evergrande New Energy Vehicle Group Ltd. said it achieved a “big milestone” with the production of the first Hengchi 5 SUV.

An accompanying video showed a car labelled “00001” being produced in a factory, and several cars being driven off a production line.

Tesla accounts for half of China’s 2021 NEV exports

Lithium continued a wild ride into 2022, touching new highs as concerns mounted over short supply of the mainstay battery material for powering a fast-growing number of electric vehicles.

Battery-grade lithium carbonate in China soared to a record 316,000 yuan ($49,600) per ton Wednesday in China, adding 100,000 yuan in a month, according to data from metal research firm Shanghai Metals Market.

Authorities in China have intensified supervision of after-school education providers that go underground by renaming their services or switching to individual tutoring, especially amid increased demand as winter holidays approach.

The Ministry of Education in a notice (link in Chinese) issued last week required local education authorities to strengthen policy enforcement during the school holiday period and to crack down on private tutoring for school curriculum subjects conducted in the name of “thinking training” or “home economics services.”

Guangzhou Automobile Group Co. Ltd. (GAC) estimates its 2021 profit jumped as much as 27% following a poor third quarter as the state-owned carmaker said it was able to overcome supply problems as it doubles down on electric vehicles.

The Shanghai-traded company said net profit attributable to shareholders will come in somewhere between 6.6 billion yuan ($1 billion) and 7.6 billion yuan, representing an increase of 11% to 27% from 2020, according to a Tuesday exchange filing (link in Chinese).