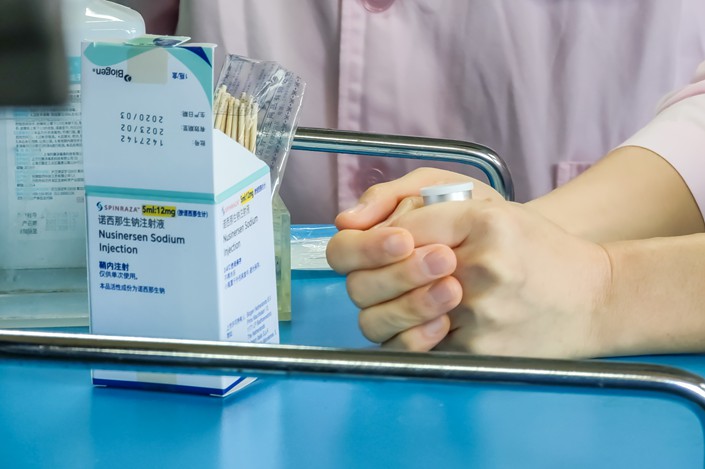 The heavy cost of rare disease treatment in China, such as this drug for spinal muscular atrophy, can be financially crippling to patients and their caregivers. Photo: VCG

In Depth: Fixing the high cost of rare disease treatment in China

Fourteen years ago, Tongtong was diagnosed with MPS II, a rare disease also known as Hunter syndrome that affects many parts of the body. His condition gradually deteriorated due to a lack of specific treatments, and in late 2019, he became wheelchair-bound, and then he was even unable to stand.

Without an effective treatment, Tongtong’s condition is likely to continue to worsen, and he could suffer from severe organ damage. His mother Liu Xia is desperate to find help.

Amid the cloud of anxieties, there was a silver lining for Liu. The only drug treating the rare disease, Hunterase, appeared on the domestic market last June. But it came with a price tag of 1 million yuan ($157,400) to 2 million yuan annually, a burden that many families cannot afford.

A China carbon tax is needed to offset the increased cost to Chinese exporters from a proposed European Union carbon border tax that’s set to be brought forward, experts say.

Brussels announced a carbon border adjustment mechanism (CBAM), commonly known as the carbon border tax, in July last year as part of efforts to combat climate change. While the transition period of the CBAM was initially set for three years, from Jan. 1, 2023, to Dec. 31, 2025, an amendment proposal published in November shortened the transition to two years ending Dec. 31, 2024.

The EU is the second-largest importer of Chinese goods. After the CBAM comes into effect, carbon tax levied on Chinese goods exported to the EU could amount to as much as $15 billion a year if it only applies to the difference in carbon intensity compared with locally produced products, a Goldman Sachs report published in early 2021 said.

In the document, regulators including the National Development and Reform Commission, the State Administration for Market Supervision and the Cyberspace Administration of China urged internet platform companies and the financial institutions controlled and backed by them to strictly implement requirements for capital and leverage ratios.

The move highlights the telecommunications equipment giant’s ambition to expand its footprint in the advanced manufacturing investment sector.

PetroChina Fuel Oil Co. Ltd., the subsidiary, was cited for illegally reselling 179.5 million tons of imported crude to 115 local refinery companies over the past 15 years, the National Audit Office found. The audit office didn’t put a value on the oil, but at today’s prices, the illegally sold crude would have a market cost of more than $100 billion.

China’s troubled property firms face a tough first quarter as they have to pay back a record amount of offshore bonds while new home sales are depressed and finding financing remains a challenge, analysts said.

China’s cyberspace watchdog cast doubt on the authenticity of a document that emerged online this week suggesting the agency plans to force large internet firms to seek its approval before raising cash or going public.

“The Cyberspace Administration of China (CAC) has never released such a document. This is false information,” the agency said in a statement (link in Chinese) posted to its official WeChat account, which did not elaborate.

Hong Kong-headquartered blockchain gaming startup Animoca Brands Corp. Ltd. started the New Year with a bang by completing a $359 million funding round that gives it a valuation of nearly $5.8 billion.

The funding reflects growing investor interest in virtual worlds where people can meet up, visit buildings, buy goods, play sports and work together on projects, among other things, via their personalized virtual avatars, an area now known by the buzz term “metaverse.”