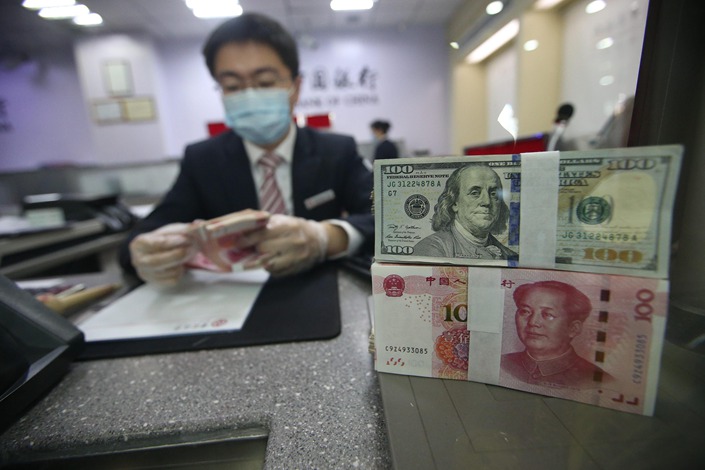 The People’s Bank of China has tentatively signaled that it wants to slow the yuan depreciation momentum. Photo: VCG

After significant appreciation against the CFETS basket in the past year, the yuan has been relatively stable against the U.S. dollar until recently, appreciating only 2.5% between the beginning of 2021 and April 18, 2022. Yuan CEFTS basket appreciated over 12% during the same period, however, as the yuan appreciated against many trading partner currencies along with the U.S. dollar. This has come after a 4% appreciation in 2020. China’s nominal effective exchange rate and real effective exchange rate appreciated by 9.3%, and 4% respectively since the beginning of 2021, according to the Bank for International Settlements.

Fundamentals supporting the yuan’s strength have waned lately. The strengthening of the yuan since the second half of 2020 had been supported by China’s early economic recovery post Covid in 2020, strong exports and current account surplus, and sizable positive spread over external yields. However, China’s economy has faced significant downward pressure since end 2021 and monetary policy is expected to ease further.

Meanwhile, the U.S. Federal Reserve has started to hike interest rates and is expected to tighten monetary policy aggressively in the face of record high inflation. The Chinese Government Bond-U.S. treasury yield spread has quickly disappeared. In addition, while China’s export growth has remained resilient, it is expected to drop in the coming months due to changing global demand and Covid-related supply chain disruptions at home.

After recording bond portfolio inflows of $15 billion a month in 2021, China saw a net outflow of $13 billion in February and another $18 billion in March from the domestic bond market. Concerns about a weaker economy and uncertain policy environment also contributed to $5.5 billion outflow from the northbound stock-connect channels since February. Sentiment seems to have also shifted among exporters and importers — while the foreign exchange settlement ratio (conversion of FX to RMB) was high in the first three months, which contributed to the yuan’s strength, it has reportedly declined in April (to be confirmed by macro data). Meanwhile, the FX purchase ratio (conversion of RMB to FX) rose sharply in March to 68.1%, the highest level since the third quarter of 2019.

The yuan has further room to depreciate. Given how much CFETS has appreciated in the past 15 months and how the fundamentals have shifted, we believe the yuan can depreciate further. For example, assuming all other exchange rates remain unchanged, the yuan at 6.9 against the dollar would bring CFETS exchange rate down to about 100.4, average of the 2021 level. From a market perspective, relative strength of the yuan meant that hedging positions were light until about two weeks ago, and many exporters may have also been caught off guard by the latest move. As more market participants hedge the risk of further yuan depreciation, this could add to the momentum of the yuan depreciation. On the other hand, the Chinese bond and equity market should continue to attract foreign inflows that are looking for diversification over the long term.

Yuan depreciation can help stabilize China’s exports and growth. With the economy facing significant downward pressure, yuan depreciation can help reduce the damage caused by earlier appreciation and stabilize exports. However, the likely positive impact will be limited given that recent depreciation only got CFETS back to mid-February level, and a move to 6.9 will only return CFETS to mid-2021 level (assuming the U.S. dollar does not appreciate further). Meanwhile, China does not need to worry much about the impact of yuan depreciation on inflation. While it will likely contribute to higher PPI inflation, China’s CPI inflation has remained low due to low food prices and weak transmission from PPI to CPI, the latter due to weak end demand. We expect CPI inflation to climb higher in the second half of 2022 but average 2.4% in 2022.

We expect the People’s Bank of China (PBOC) to strike a balance with the yuan exchange rate. While a weaker yuan is consistent with market fundamentals and current monetary policy direction, we believe the PBOC would not use yuan depreciation as a pro-growth tool much. This is because China has always valued exchange rate stability and would want to keep a close control on the currency. It does not want one-way momentum to build up that could lead to excessive volatility in financial markets. In addition, yuan stability is also part of phase one of the U.S.-China trade agreement, and consistent with China’s long-term objective of yuan internationalization.

The PBOC has tentatively signaled that it wants to slow the depreciation momentum. At first the PBOC let the market bring the yuan weaker, without using the daily fixing much to guide the market. After a few days of large moves, the PBOC announced to lower reserve requirement on foreign exchange deposit from 9% to 8% on April 25, effective May 15. While the cut itself only releases about $10 billion foreign exchange to the market, the move was a signal of the PBOC’s desire to slowdown the depreciation momentum. The market indeed stabilized for a few days, but sharp moves in the Japanese yen and DXY again pushed the yuan weaker at the end of April.

The PBOC has means to stabilize the currency. The PBOC could lower reserve requirement for FX deposit much more — it lifted it by four percentage points in 2021 against the fast appreciation then. In addition, the PBOC can reintroduce the counter-cyclical factor in its yuan daily fixing price setting to lean more strongly against the market momentum. It can also increase the cost of shorting yuan onshore (for example by lifting up risk reserve requirement of FX forward positions) and offshore market (through a higher CNH Hong Kong inter-bank offered rate). Moreover, it can tighten controls on capital outflows, including by limiting domestic banks’ and companies’ offshore lending, and encourage domestic entities with foreign exchange proceeds to increase their settlement.

We revised our end-2022 forecast for the yuan against the dollar from 6.6 to 6.9, and end-2023 forecast to 6.7. In light of the above, we now expect the yuan to weaken further against the U.S. dollar in the coming months, ending the year at 6.9. The yuan may break 7 per dollar before end-year due to U.S. dollar strength and a likely sharp weakening of China’s exports and general economy, but should settle below 7 by year end. This is because we expect Covid-related economic impact to decline in the second half of the year, with growth momentum rebounding and market confidence improving. In 2023, our global FX strategists expect the U.S. dollar to weaken against other major currencies while we expect China’s economy to recover further. Accordingly, we expect a mild appreciation of the yuan.