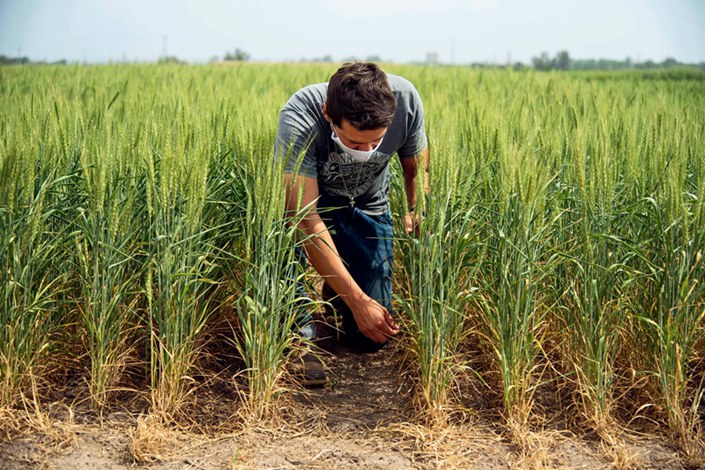 An agricultural expert examines genetically modified wheat at a test field in Buenos Aires, Argentina, on Oct. 15, 2020. GM crops are already grown on a large scale in food-exporting countries such as the United States, Brazil and Argentina. Photo: VCG

In Depth: How China took another step forward on genetically modified farming

It’s been over a decade since China first granted approval for the commercial production of insect-resistant cotton and disease-resistant papaya. But while many of the worlds’ top crop producing countries have been busy since the turn of the century letting businesses grow genetically modified seeds and crops, China’s top policymakers have held back.

In January, the country’s Ministry of Agriculture and Rural Affairs revised a set of regulations for seed makers to seek approval for GM crops.

China aims to beat its own emission targets, envoy says

China aims to hit its carbon-reduction goals ahead of schedule, Chinese climate change envoy Xie Zhenhua said Tuesday in a speech at the World Economic Forum in Davos, Switzerland.

In the fight against climate change, China committed to top out emissions of leading greenhouse gas carbon dioxide by 2030 and achieve carbon neutrality by 2060. The country is moving to beat those targets, Xie said.

Nearly 200 U.S.-traded Chinese companies could be at risk of delisting if the accounting watchdog overseen by the U.S. Securities and Exchange Commission (SEC) cannot complete audit inspections and investigations by early November, an SEC official said.

This timetable would give the U.S. Public Company Accounting Oversight Board (PCAOB) enough time to determine whether a company complies with its audit requirements by a year-end deadline, Y.J. Fischer, director at the SEC’s office of international affairs, said Tuesday in a speech. Companies deemed noncompliant could face delisting from U.S. stock exchanges as soon as early 2023.

‘I must leave Shanghai’ — tales of train station frustration

After a grueling six-hour walk, Chen Peng finally arrived at the vicinity of the Shanghai Hongqiao Railway Station early Thursday morning, only to discover a queue stretching nearly 2 kilometers of travelers waiting to enter the station.

The railway station is a key transport hub for intercity travel, for leaving and arriving in Shanghai. With the city easing lockdowns, many flocked to the station to proceed with travel plans that were hijacked by Covid restrictions.

China cranks up pressure on banks to boost lending

Luckin Coffee Inc. says it made its first operating profit in the first quarter, two years after the wannabe Starbucks challenger delisted from the Nasdaq for faking hundreds of millions of dollars of revenue.

Luckin earned 19.8 million yuan ($3 million) in net profit in the period, reversing a loss of 232.5 million yuan a year earlier, and revenue soared 89.5% year-on-year to 2.4 billion yuan, according to a quarterly earnings report released Tuesday.

Shares of Kuaishou Technology Co. Ltd. jumped as much as 6% early Wednesday after the Hong Kong-traded company reported narrowing losses and decent revenue growth for the first quarter, defying a sweeping crackdown that has crushed Chinese tech stocks.

In the three months through March, the Beijing-based social short-video company, which has lost more than 80% of its market value from a peak in February 2021, narrowed its adjusted net loss by 34.1% year-on-year to 3.7 billion yuan as revenue grew 23.8% year-on-year to 21.1 billion yuan, according to its earnings report released Tuesday.