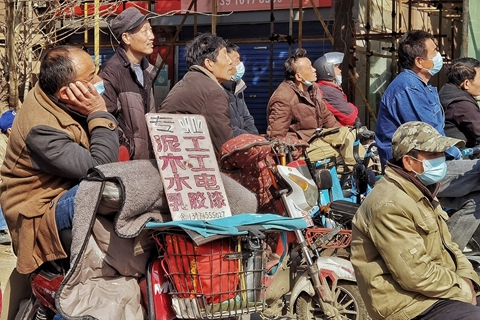 Few of the dozens of workers interviewed by Caixin have a clear pension plan. Photo: VCG

In Depth: Millions of China’s migrant workers find themselves shunned in old age

The Shuitun job fair on the outskirts of Beijing was bustling with job seekers even before the crack of dawn one April morning. Like many other job markets offering short-term employment across Beijing, it was packed with seniors. Mostly men, slightly hunched, dressed in dark clothes and trousers.

These elderly migrant workers are part of the generation that's been indispensable to China’s economic growth. Most of them were born in the 1950s and 1960s and went out to work in the 1980s and 1990s when China began its reform and opening-up. According to data released by China’s National Bureau of Statistics in April, China had 300 million migrant workers in 2021, with those over the age of 50 accounting for 27.3%, or around 80 million.

Activity in China’s manufacturing sector contracted for the third straight month in May, though at a slower pace, a Caixin-sponsored survey showed Wednesday, as manufacturers expressed the least optimism in five months amid stringent Covid-19 control measures.

The Caixin China General Manufacturing Purchasing Managers’ Index (PMI), which gives an independent snapshot of the country’s manufacturing sector, rose to 48.1 in May from 46 the previous month, the survey showed. Readings of less than 50 indicate contraction.

China will cut the sales tax by half to 5% on some low-emission passenger vehicles as part of the government’s push to raise consumption hammered by Covid lockdowns.

The Finance Ministry and the State Taxation Administration issued details of the sales-tax cut Tuesday. The government rolled out a series of measures to support businesses and consumer spending at a State Council meeting last week chaired by Premier Li Keqiang, including cuts of 60 billion yuan on passenger car purchase taxes.

China is willing to work with Pacific island nations to build a community with a shared future, Chinese President Xi Jinping said Monday in a written address to a meeting of China-Pacific foreign ministers.

“No matter how the international situation may change, China will always be a good friend, good brother and good partner of Pacific island countries,” Xi said in the written address.

The Bank for International Settlements (BIS) appointed Zhang Tao, a former deputy chief at the International Monetary Fund (IMF), to head its Asia-Pacific office as the bank looks to further boost cooperation among central banks in the increasingly influential region.

Zhang, 58, who is currently supervisory board chairman at state-owned insurer The People’s Insurance Co. (Group) of China Ltd. (PICC), will join the BIS as chief representative for Asia and the Pacific, according to a press release issued Wednesday by the bank. The appointment will make Zhang the first Chinese to join the BIS senior management team in its 92-year history.

A former deputy party chief of a wealthy Chinese province was expelled from the Communist Party and removed from public office over allegations including bribery and data fabrication, the country’s top graft watchdog said Tuesday.

Zhang Jinghua, former deputy secretary of Jiangsu province’s party committee, will have his illegal gains confiscated and his case transferred to prosecutors, according to a statement (link in Chinese) from the Central Commission for Discipline Inspection.

Global investors ease back into China equities on rebound bets

A coalbed methane pipeline running across North China’s Shanxi and Central China’s Henan provinces ruptured for the second time in three years, causing a fire that may take days to bring under control, Caixin learned.

The explosion took place Tuesday in a section of the pipeline located in Jincheng city, Shanxi, bordering Henan to the south and southeast. A fire rising meters high can be seen billowing from the vicinity of the pipeline in videos obtained and verified by Caixin. No casualty count could be confirmed.

No official acknowledgement or cause has been given.

National flag carrier Air China Ltd. is planning to take control of Shandong Airlines as part of a bailout of the debt-ridden regional airline, it said this week.

The state-owned giant is stepping in as its smaller peer suffers along with the rest of the country’s civil aviation industry, with companies racking up huge losses due to the Covid-19 pandemic.

ByteDance Ltd. reported that growth surged in its fledging e-commerce business last year on the back of an expanding base of shoppers on its video-sharing platform Douyin as its competition with domestic rival Kuaishou heats up.

The Chinese domestic sibling of TikTok reported that the gross merchandise value from e-commerce transactions leaped 320% in 2021 as the number of customers on the platform rose 69%, according to statistics disclosed at a company event Tuesday.