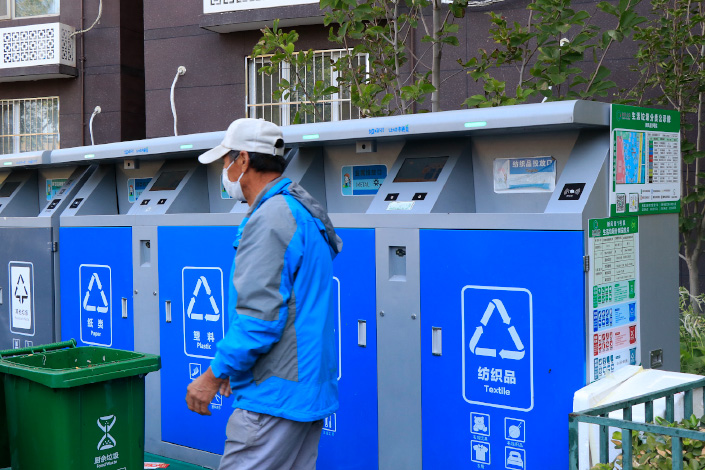 Garbage bins equipped with face recognition technology are installed in a Beijing neighborhood in 2020. The lids of the bins opens only when residents are identified. Photo: VCG

As China ramps up its legal protection of personal data, large-scale personal information collection and processing may violate the law if done without users’ informed consent. The country’s top prosecutor reported 2,000 public interest cases (link in Chinese) regarding personal information in 2021, a nearly threefold increase from the previous year.

There have been “misunderstandings” that using the digital currency infringes on people’s privacy and turns everyone into “a little ant with GPS installed,” Mu said Sunday in a speech at the 5th Digital China Summit, a government-backed conference in Fuzhou, Fujian province. There is a “controlled anonymity” applied to the currency, which means authorities access users’ personal information only when they suspect illegal transactions have taken place, he said.

Zhao Peng, a finance industry veteran who worked for China Life Insurance (Group) Co. for more than two decades, is returning to the state-owned insurance giant to head its publicly traded subsidiary China Life Insurance Co. Ltd., Caixin learned from sources with knowledge of the matter.

Zhao will be named president and Communist Party secretary of the group’s Shanghai- and Hong Kong-listed unit, succeeding 59-year-old Su Hengxuan, who is stepping down as president but will remain as a vice president of the group, the sources said.

A former chairman and major shareholder of China’s Tsinghua Unigroup Co. Ltd. was placed under investigation as the debt-laden semiconductor conglomerate wraps up a bankruptcy reorganization to reboot its businesses.

Zhao Weiguo, 55, was taken away from his home in Beijing by authorities in mid-July and has since been out of contact, several people with knowledge of the matter told Caixin.

Western Europe and Southeast Asia became the main destinations for China’s new energy vehicle (NEV) exports, accounting for nearly half of all cars sold overseas during the first six months this year, according to the China Passenger Car Association (CPCA).

China exported 362,200 NEVs in the first half, more than double from the previous year, Cui Songshu, secretary general of the CPCA, said over the weekend citing customs data. Exports to Western European countries reached 122,700 autos, accounting 34% of total exports, while sales to Southeast Asia came to 58,400 units, or 16% of the total, Cui said.