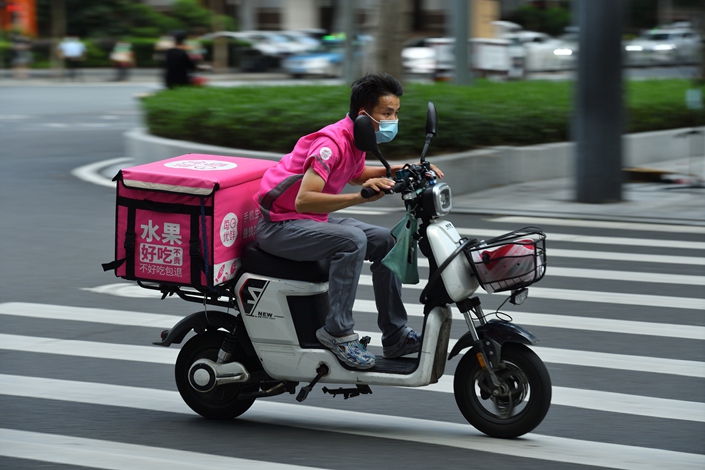 The previous day, the online grocer laid off most of its staff and closed its core express grocery delivery business, which accounted for 85% of its revenue. Missfresh, which is now believed to owe as much as 2 billion yuan in unpaid debts, has denied it is going into liquidation.

Beijing announced a new round of sanctions Tuesday on a number of “stubborn ‘Taiwan independence’ players,” banning them and their relatives from entering the Chinese mainland, Hong Kong or Macao, the state-run Xinhua News Agency reported.

The individuals’ affiliated organizations will meanwhile be barred from working with or profiting from connections with the mainland, according to a spokesperson from the Taiwan Work Office of the Central Committee.

Controversial Chinese businessman She Zhijiang has been arrested in Thailand for allegedly running illegal online gambling operations, sources confirmed to Caixin, after spending most of a decade as a fugitive.

She, chairman of a company that developed a $15 billion industrial and entertainment complex in Myanmar called Yatai City, was arrested by Bangkok police last Wednesday and is now awaiting extradition to China, according to local media reports.

More Chinese cities booked home price declines in July after a mortgage boycott spread across the country by thousands of angry homebuyers protesting unfinished properties on which they were making loan payments.

Haidilao’s profit warning has a silver lining for investors

Haidilao International Holding Ltd. estimates it swung back to a loss in the first half of 2022 as the Chinese hotpot chain downsized its business in ways that cheered investors enough to send its stock price soaring.

In an exchange filing Sunday, Hong Kong-listed Haidilao predicted it will report a net loss of between 225 million yuan ($33 million) and 297 million yuan for the six months through June, as compared with last year’s first-half profit of 96.5 million yuan. It said it expected first-half revenue to fall at least 17% year-on-year to 16.7 billion yuan.

China peeks behind the curtain at Alibaba, ByteDance and Tencent