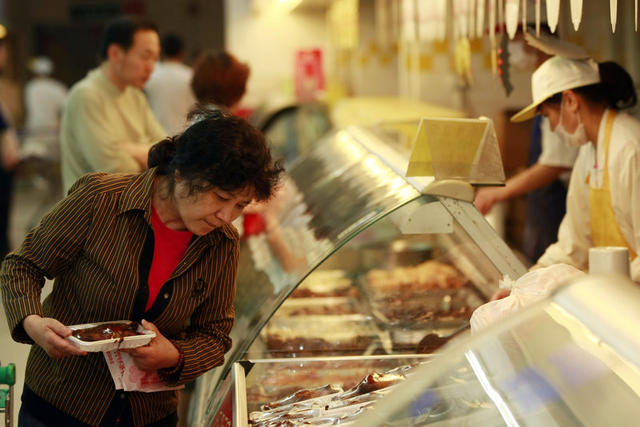 Food safety scandals have become so common in China that people are losing confidence in what they eat. The government has consistently emphasized the need for better regulation of the food industry, and it's established an inter-ministerial committee under the State Council to pursue that goal. But so far little progress has been achieved.

Zhi Shuping, head of the government's General Administration of Quality Supervision, Inspection and Quarantine, said in March during the Boao Forum for Asia that more than 99 percent of the food exported from China meets all standards for safety and quality.

Such an apparent gap in quality between what's produced for the domestic and foreign markets has led to public discontent.

So why are food safety problems so much more likely to occur in China than in other countries? The situation can be blamed on the combined effects of the country's food supply system and characteristics of the agriculture industry as a whole.

Food quality regulators need to supervise every stage of food production, from farmers to procurers, processors, wholesalers and retailers. Any problem at any stage can lead to a disaster.

At one end of the industrial chain are farmers. China's household-based contract system for agricultural management means each household's output is very limited. Recent data shows that China has more than 260 million rural households that each cultivate on average about nine mu – or 6,000 square meters – of land.

It's very difficult to supervise and manage such a huge number of small, scattered farming households. So when a food safety incident happens, it's unrealistic to punish all the farmers involved.

Let's take a look at procurers, processors, wholesalers and retailers. Any that are big companies are often protected by local governments that want to maintain employment levels and social stability, as well as protect the reputations of local government officials.

For example, with help from the city of Shijiazhuang's government, reports about tainted milk produced by a local dairy called Sanlu Group were hidden from the public in 2008. The scandal became a national sensation long after the firm received reports from local distributors that its milk powder was making people sick.

It can thus be inferred that it's difficult to enforce rules and punish wrongdoers whenever food safety issues are caused by farmers or big companies. Only when a culprit is a small enterprise can an effective punishment be imposed. And these companies usually move around easily, which means the government may have a hard time keeping track of them.

Food problems are also tied to fierce competition between farmers and between food companies. Bad food can be sold at low prices, forcing competitors to follow suit or lose out. Technologies for cheaply processing food may be widely adopted by companies seeking to stay in business. All of this underlines the need for and challenges of government regulation.

As in developed countries, China has a system for certifying safe foods. They are divided into three categories: pollution-free, green and organic. But the system has failed to gain the consumer trust because it's widely believed that certification tags can be faked. This is especially true considering that certification organizations are unable to monitor the whole chain of food production in real time.

But why did more than 99 percent of the foods we exported meet quality standards? It's probably because all those exporters are companies with long-term goals. Besides, foods made for export usually command higher prices than those made for the China market. So producers can expect reasonably high profit margins. Moreover, a company caught making and exporting fake food risks losing contracts permanently and going bankrupt. These factors, then, are strong incentives for a company and its suppliers to maintain strict quality control.

The same logic could be applied to the domestic food industry.

To guarantee food safety, the government first needs to raise the entry threshold for food businesses and encourage mergers and acquisitions to form several, large companies. Only when companies are big enough can regulators supervise them at a reasonable cost.

The government also needs to encourage farmers to form associations and sell through those associations. This practice would likely raise their profits, build brand awareness and help farmers supervise each other's operations.

Moreover, the government needs to establish strict regulations for retailers and punish violators severely. That means shutting them down if necessary and pursuing legal action against company executives when food safety regulations are violated. This will provide incentives for companies to extend quality control systems all the way to suppliers.

Last but not least, the central government should set up a public platform that accepts food safety problem reports. Through a system of this kind, local governments and the big companies they support could not dodge responsibility.

These measures, however, would probably increase operating costs for farmers and companies. These extra costs would be passed on to consumers. That is the unfortunate reality of economics. You cannot have it both ways.

Yu Xiaohua is a professor in Germany at the University of Gottingen's Courant Research Centre of Poverty, Equity and Growth in Developing and Transition Countries