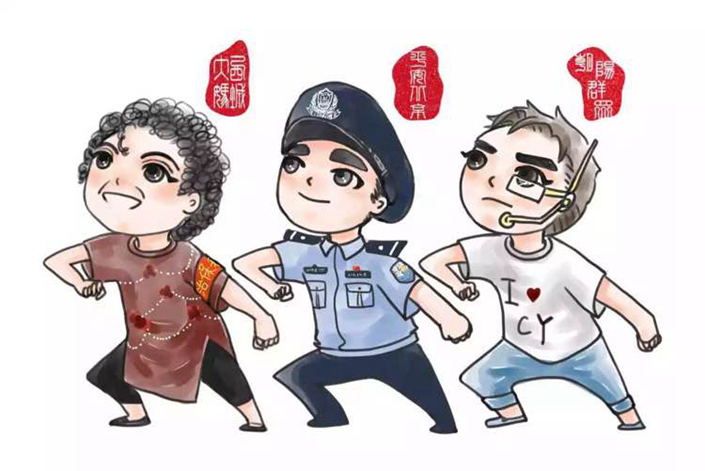 Chaoyang district police in Beijing have released an app that allows the public to report crime. The app's characters are, from left to right, a watchful "Xicheng Dama" (district aunt), a police officer and a member of the Chaoyang "Qunzhong," or public. Photo: Beijing Police

(Beijing) — Police in Beijing have taken a creative approach to promote a mobile app that allows the public to submit tipoffs, after it failed to create a buzz since its August launch.

The “Chaoyang Masses HD” app was named in honor of residents of Beijing’s most populous district who have been widely credited by law enforcement agencies in recent years for submitting helpful leads that led to busting drug gangs and prostitution rings.

The app allows users to submit information in the form of text, photographs or videos. Members of the public can also use it to report and track missing elderly people, or lost items.

The app, which has been available in app stores free of charge since late August 2016, received little attention until Tuesday when Beijing police published an article on the official microblog announcing the new name.

“Download the app to become a ‘Chaoyang resident’ and inform the police about suspicious behavior in your neighborhood,” the post read.

Fang, 34, was detained for abusing cannabis at home in August 2014 and sentenced to six months in jail. Police credited unnamed “Chaoyang residents” for the initial tipoff.

In another case, Charles Xue, a Chinese-American angel investor and online social commentator better known as Xue Manzi, was detained for soliciting prostitutes in August 2013. Chaoyang district police said local residents had passed information that led to his arrest.

The anonymous group has become a household name in the Chinese capital and police have even created a cartoon character after them, which appears in its public information videos. Another popular vigilante figure in these cartoons is the Xicheng Dama, or Xicheng district aunts, serving as the eyes and ears of the police.

However, these amateur sleuths who are mostly retirees, are often paid by the government to keep an eye out for any suspicious behavior in their neighborhood, raising fears over violations of privacy.

While many internet commentators chose to poke fun at the new name, some said they were concerned about the growing influence of these obscure vigilante groups.

It harks back to the time of the Cultural Revolution when citizens were encouraged to spy on others including their neighbors and even family members, said one commentator on Chinese social media site Sina Weibo.

During the tumultuous period from 1966 to 1976, such tactics were used by authorities to collect information about possible dissidents.