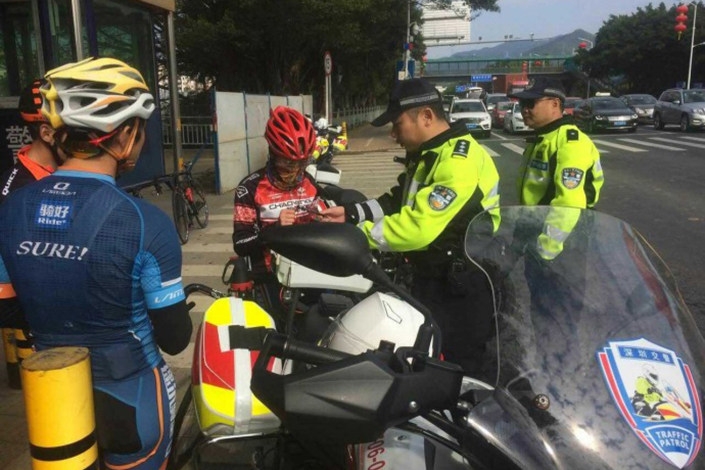 (Guangzhou) — Cyclists in China’s southern tech hub of Shenzhen are up in arms against the police for levying a 50 yuan fine for cycling on lanes reserved for motorists.

Many who commute to work or take short trips on bicycles say the city does not have adequate cycling lanes, forcing them onto roads choked with traffic.

Police started levying the fine on Feb. 9. “Why do you want to ride on roads designated for motor vehicles, while a bicycle lane is just nearby?” police asked on their official microblog announcing the crackdown.

But authorities were not prepared for the unusually high number of critical comments. Over a thousand angry citizens bemoaned that cyclists were being forced on to narrow, crowded sidewalks.

“Bike lane signs in Shenzhen are used by authorities to fool the public,” one microblog user wrote. “Anyone will see how broken and potholed these lanes are if they ride for five kilometers.”

“Officers, have you ever cycled on the city’s bike lanes or do you know how hard it is to be a cyclist in Shenzhen?” another asked wistfully. “No one would risk their lives and violate traffic rules if there were properly-built cycling lanes.”

Green Bike Transit, a Guangzhou-based advocacy group promoting the use of bicycles in China, posted photos of sidewalks in Shenzhen that were too narrow to accommodate both riders and pedestrians on its official social media account on WeChat.

The fine was in line with government traffic rules, but regulators should also heed cyclists’ grievances, the group said.

Most large cities in China lack dedicated lanes for bicycles forcing many riders to weave traffic instead.

Fierce competition between “pedal pushers” and combustion engines has also made the roads much less safe.

A report released by the China Association of Work Safety in October 2013 found that more than 40% of traffic accidents in the country involved bicycles.

All this was blocking China’s attempt to reasserts itself as a nation with “pedal power.” Bicycles used to be the main mode of transportation in the 1970’s and 1980’s, but slowly fell out of favor after global car brands entered the country. Now they are back in vogue among the environmentally conscious.

The rising popularity of bike-sharing companies has further clogged narrow sidewalks. Over 200,000 bicycles were available for rent, each for as low as 1 yuan per hour, in Shenzhen by the end of 2016, official data showed.

Nearly 85% of those recently surveyed by Green Bike Transit said that cyclists were forced onto sidewalks and over 75% said their cities lacked bike-friendly policies.

Is your city bike-friendly? Or is it a daily nightmare for you to weave through traffic or choked sidewalks on your bike? What can authorities do to make things better? Tell us your story or share photos at news@caixin.com