By Liao Yuanxin and Wu Gang 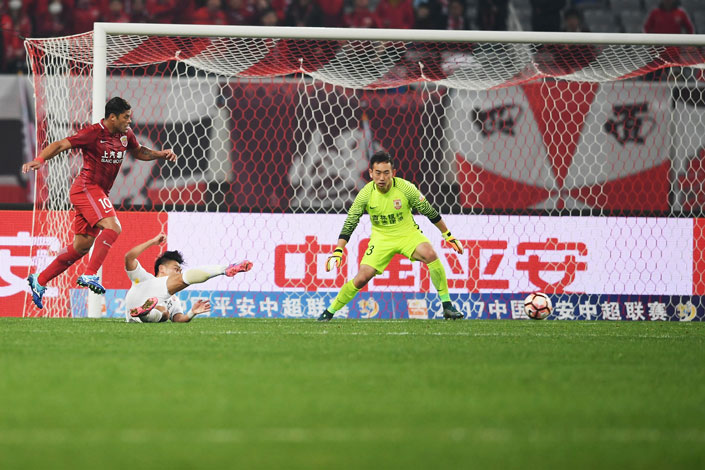 Shenzhen-based Ping An has been CSL’s sole title sponsor since signing a four-year contract in 2014 for 600 million yuan, which at that time was the longest and most expensive sponsorship deal in CSL history.

CSL has more than 10 sponsors beside the title sponsor, including partners and official suppliers.

Ping An was given what some media outlets called “priority status” to bid for the new, five-year contract covering the period that begins in 2018. CSL did not say whether any other potential sponsors submitted bids.

CSL has been the top-ranked soccer league in China since replacing the Series A League in 2004. But finding league sponsors has proven difficult in part due to rampant cheating and bribery among soccer club officials and referees. At times, CSL had no sponsors at all.

CSL’s reputation improved after 58 Chinese Football Association officials, referees and athletes were permanently banned from the sport or convicted on corruption charges. Some were sentenced to 15 years in prison.

Zhang Jian, the soccer association’s vice chairman, said Monday at a signing ceremony with Ping An officials in Beijing that in recent years CSL’s value has been rising thanks to a reform program initiated by the central government and growing investor interest in soccer clubs. Investor injections made it possible for world-class soccer stars such as Brazilian players Paulinho and Alexandre Pato to join CSL clubs.

President Xi Jinping has gotten behind a comprehensive plan introduced in February 2015 aimed at reinvigorating professional soccer in China. Last year, the government unveiled plans for lifting the nation’s professional leagues, national teams and the entire soccer industry to world-class status by 2050.

The effort is apparently making headway: CSL says television viewers have watched its games in 96 countries and regions worldwide.

News of the CSL deal helped lift Ping An Insurance’s stock price on the Shanghai Stock Exchange 4.46% to close at 42.84 yuan per share Monday.