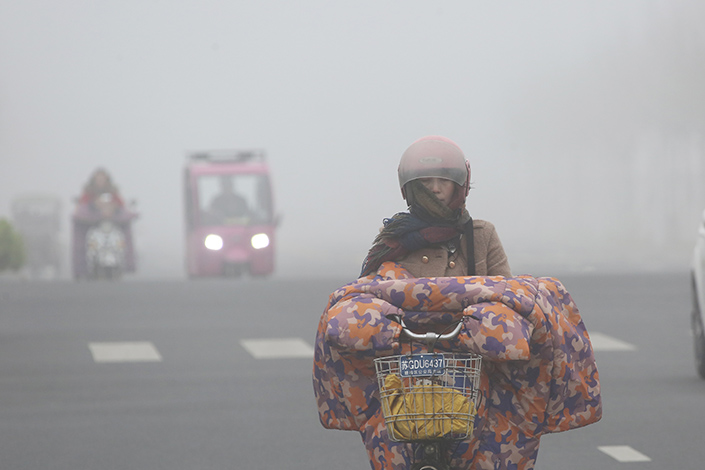 (Beijing) — China has unveiled a draft regulation that would make environmental pollution liability insurance compulsory for heavy polluters, including oil and gas companies and chemical factories.

The move comes as Beijing steps up efforts to fight air, water and soil pollution nationwide, but the push could be undermined by the country’s Environmental Protection Law, which only “encourages” businesses to buy such policies, an analyst said.

According to the draft regulation, published by the Ministry of Environmental Protection (MEP) and the China Insurance Regulatory Commission on Friday, companies in eight sectors — including oil and gas exploration, and those involved in processing hazardous chemicals or materials, including radioactive waste — would be required to have environmental pollution liability insurance. Those that fail to buy the insurance could face fines of up to 30,000 yuan ($4,400).

The draft guidelines are open for public feedback until July 10 and need to be approved by the State Council, China’s cabinet.

The regulations come as the government seeks to share the cleanup costs of heavy industrial accidents with the businesses responsible for them. Pollution costs have shaved off up to 3% of the gross domestic product (GDP) each year from 2004 and 2012, The Southern Weekly reported in April 2015, citing Wang Jinnan, a deputy director of the Chinese Academy for Environmental Planning.

China lost 1.2 trillion yuan, or 2.2% of its GDP, due to environmental pollution in 2012, the latest figure available, said Wang, who also heads a national research project on the economy and environmental protection.

The central government first floated the idea of pollution liability insurance in 2006 and launched pilot programs that forced businesses to buy these covers in some regions from 2013.

However, businesses have resisted the move as there was no legal basis for such a policy, said professor Lan Hong at Renmin University of China’s School of Environment & Natural Resources.

The Environmental Protection Law, which came into effect in 2015, has a clause saying only that businesses are “encouraged by the state” to have environment pollution liability insurance. “Business owners are asking whether regulations could override the law, and they are arguing that regulators have no legal mandate to impose such policies,” Lan said.

For example, more than 400 companies in Hunan province were ordered to take out pollution liability insurance policies in 2014 after media exposed severe soil pollution caused by heavy metals. However, the number dropped to 18 in 2015, the Environmental Ministry said.

Nationwide, nearly 5,000 businesses had pollution-related insurance policies in December 2014, but the number dropped by 20% to 4,000 about a year later, MEP statistics showed.

The renewed push for liability insurance policies signals a greater realization among policymakers for the need to protect the environment instead of focusing only on economic development, according to Lan.

Lan said legislators should consider revising the country’s 2-year-old environmental law to include liability insurance to ensure the latest push has legal backing.